It’s Sunday, the day to give thanks. And Greg Gutfeld has compiled a list of reasons to be grateful – in the guise of Hillary’s Greatest Hits. 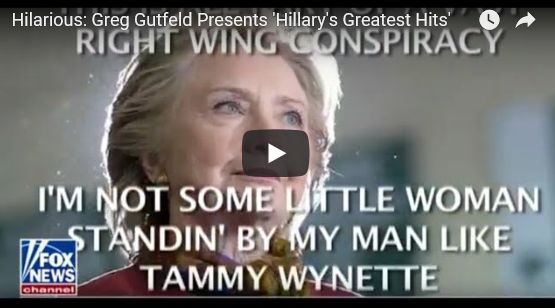 Speaking of angry former First Ladies I suppose now would be a good time to address Lady M’s recent scold about the Good Parent/Bad Parent Presidents Club. But since it’s Sunday and I’m taking it easy I’m going to let James Woods field a response to her moronic comment; it’s as succinct as a biting critique can possibly be in 140 characters or less: 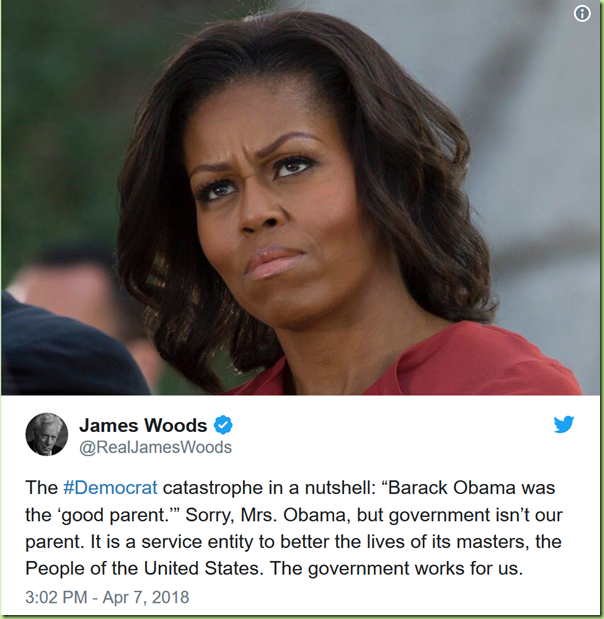 And since we are speaking of Angry Women would someone please get Ann Coulter access to her self-medicating drug of choice before she hurts herself:

“I knew he was a shallow, lazy ignoramus, and I didn’t care,” Coulter told the audience, which was largely comprised of College Republicans, according to the news outlet.

“It kind of breaks my heart,” she added.

Dear Annie, we don’t want you to have a broken heart. Have you considered another face lift? Or maybe laying off the wine a bit? 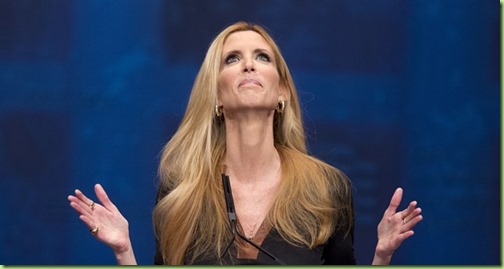 Or possibly saying a few prayers?

Coulter has to be bipolar.

She needs to hit the mashed potato offerings a lot more. Too thin.

That girl needs a sammitch.

Nevertheless, she does obsess because her wall hasn't yet been topped off with jagged glass. You can usually tell in the first sentence or two if this week's effort is a Never-Trump rant. These columns cause me to move on to more interesting stuff.

Funny thing is, she is smart enough to know this is what DC looks and sounds like when someone is draining the swamp.

P.S. Ann is in her upper 50's, and I still think she is quite attractive. It probably helps or hurts that I'm an old buzzard and find most women attractive these days. Ann would have always been and still could be more than a stunner if she had consumed or started consuming one or two additional sandwiches in her life.

That and a 6 foot, 5 inch conservative lumber jack from Oregon
with huge hands who can spin her around and make her eye balls click, and shut her up for a hour a day.

Way to much fem without male influence in her skinny little life. Ann is one of the most unmannerly, lonely and unhappy public figures in conservative America, an old spinster before her time.She just loves to kick a$$ too much.

Ann has lost her sense of humor. She used to be funny.

9 posted on 04/08/2018 6:54:13 AM PDT by subterfuge (RIP T.P.)
[ Post Reply | Private Reply | To 7 | View Replies]
To: Candor7
Way to [sic] much fem without male influence in her skinny little life. Ann is one of the most unmannerly, lonely and unhappy public figures in conservative America, an old spinster before her time.She just loves to kick a$$ too much.

My understanding was that she does have a boyfriend - and that she likes her men like her coffee ("Airplane" reference).

Go get some FRiend.

I’ll say one thing about Coulter. The woman has one hell of a long neck.

Twenty five years ago, followed by a couple of children in quick succession.

A real man would still do her untold good. She's wasted on cats.