The MSM goes into apoplexy every time President Trump accuses them of “fake news,” pretending to be insulted he would even imply they are anything but 100% honest, right and true. Something he did again this morning.

Maybe this will help them understand (Via Instapundit – highlights mine):

LAYERS OF EDITORS AND FACT-CHECKERS! CHECK OUT THE CORRECTION TO THIS POLITICO PIECE:

Corrections: An earlier version of this article stated that associates of the Koch brothers proposed and lobbied Congress to pass the law establishing Puerto Rico's fiscal control board. There is no evidence of any Koch involvement in the passage of the law. An earlier version of this article also stated that the fiscal control board had reduced the minimum wage in Puerto Rico to 4 dollars an hour. The board did not lower the minimum wage, the governor did. And the governor raised it this year. An earlier version of this article stated that the U.S. Congress imposed austerity measures on Puerto Rico. The fiscal control board established by Congress instructed the commonwealth to work towards balancing its budget. The governor decided what cuts to make.

Not just wrong but 100%, diametrically wrong. Good job, Politico. It never occurred to the editors to check the allegations of Alejandra Rosa, even though she clearly exposed her bias in the wrap up:

I try to be optimistic…But then I remember my president mentioning the debt of my island in the same sentence as the losses of my people, and I worry. Or maybe, instead of worrying, we should start demanding from the federal government the resources and the dignity that we have been denied for decades. By doing this, perhaps, the hurricane will finally leave Puerto Rico.

So perhaps the media can forgive us for continuing to treat all of the propaganda news they pump out as questionable at best, biased for certain and quite possibly 100% fake. Don't blame us for our cynicism, you created it. 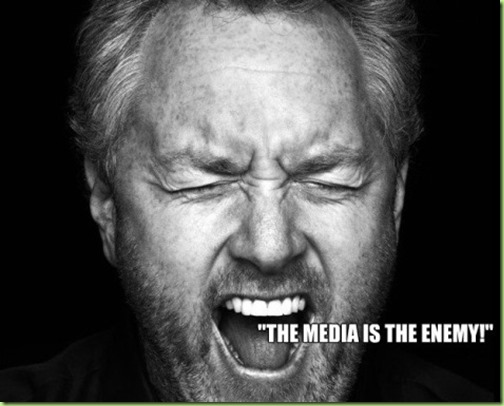 “They [the media] are not becoming irrelevant, but they are getting to the point where they are worse than irrelevant.” - Andrew Breitbart

Related, facts – they’re a stubborn thing: A Statistician Reconsiders Her Support for Gun Control After Looking at the Data.

TOPICS: Humor; Politics
KEYWORDS: cnn; donaldtrump; fakenews; nbc
1 posted on 10/05/2017 7:46:04 AM PDT by NOBO2012
[ Post Reply | Private Reply | View Replies]
To: NOBO2012
Even when it's not literally fake, it is biased propaganda. I watched PDJT's meeting in Puerto Rico with military, FEMA and local political leaders. Most (all?) of the meeting was carried on Foxnews, but not on MSNBC or CNN. They claim to be NEWS channels, but they are really commentary channels. The news was the meeting, not the pundit's comments on the meeting.

I guessed, correctly, that the MSM wanted to find one or two things to attack President Trumb about and then hammer those things for days. It was a very impressive meeting, one which most people will never see.

Then we had CNN on. If CNN didn’t outright LIE about some of the info provided, they certainly were trying to stretch the truth in a way that seemed like they wanted to change the facts......

Yes Mr. President, it is fake news.
Nobody cares.

So go make some real news.

I care and the more he shines a light on the frauds, the more the information is discussed.

Sorry if it offends you that he can take 30 secs to call out liars.

It doesn’t **offend* me AAG44 that President Trump tweets about his frustrations on fake news.

I feel it is beneath him. I feel he would be better served to give the ass wipes no attention at all instead of feeding their narcissistic ego and getting nowhere.

He needs to make real news by following through with his promises. However, the lefties would rather he tweet about BS.

As for comparison’s to Rick Wilson the gope moron, snore.....

Well I appreciate your point of view, I just happen to disagree.
There are far too many ignorant people ie. voters, who need it hammered into their head just how dangerous it is to have a media that lies repeatedly.
I’ve witnessed some people starting to question what they hear and that is vital to getting this country on a safer path.

In my opinion our President is doing much of what he said he would and I’m amazed he’s able to accomplish anything what with the daily road blocks.

I see Ricky Wilson and his snide juvenile comments and I find myself less and less tolerant of those who are hurting far more than helping. I’m of the school of thought that if you can’t make a productive suggestion or find a way to lead, then get the heck outta the way.