Did anybody else not pay any attention to what happened over the weekend? I found myself uninterested in March Madness, couldn’t summon the energy required to watch the Sunday Showboats spout off on why RyanCare was a disaster for whoever they were opposed to, not in the mood for Donald J.Trump’s tweets and couldn’t even manage to get appropriately agitated about the black-hooded New World Order Obots who showed up at the Trump rally to pepper spray the attendees.

But this caught my attention, possibly because it inadvertently provides insight and commentary on everything else that has run amok in this country over the past few decades:

An Oregon judge who last year ruled that a transgender person can legally change their sex to "non-binary" has given the OK for a Portland resident to be genderless.

The judge told NBC in an email her decisions were supported by facts and the law. – OregonLive

We’ve become inured to Federal judges who have assumed they are the ultimate arbiters of Constitutional law, but County judges who assume they are God seems a bit of an overreach even for liberals. 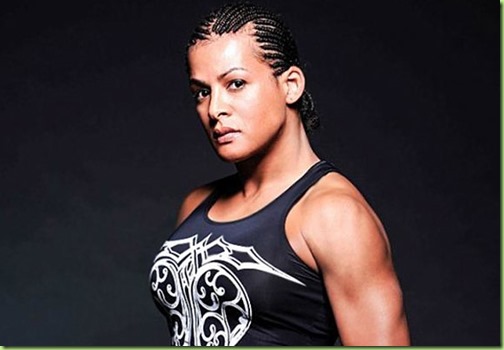 The movement for “equality” has apparently inspired transgender athletes to join teams of their preferred gender. And that often means biological males are competing against biological females on women’s teams. But in the world of sports, critics argue, equality between the sexes simply doesn’t exist. Physiologically speaking, there’s a gender gap between men and women that cannot be erased. - WND

It’s fairly obvious that transgenders will have the edge in women’s sports, given the physical strength advantage a person born with both an X and Y chromosome enjoys.

“If men can claim to be women and invade a sport that only women are allowed to compete in, then it’s a safe bet men will win,” writes the Federalist’s Brandon Morse. “All the accolades, rewards, and recognition will be taken from the women who rightfully deserve them and given to a man who essentially cheated by putting on makeup, injecting himself with hormones, and saying he’s a woman.”

Hey – be whoever you think you are, I don’t really give a crap; but don’t expect me to believe a man impersonating a woman is the same as as a woman born with two X chromosomes.

Allowing biological males to compete against women is not only unfair and dangerous to women, it’s worse than that, according to David Kupelian, WND managing editor and author of “The Snapping of the American Mind.”

“The insanity of this affects not just the transgendered individual and the women athletes thus victimized,” he said. “It also contributes to a sort of mass delusion infecting our whole society in which, thanks to the influence of the powerful LGBT movement, everybody now has to either affirm the absurd and crazy – that a man who is essentially a female impersonator can fairly compete against women – or they have to suffer abuse and persecution as bigots just for speaking the truth.” - WND

But back to “Patch” – which is now officially both a (non)gender lifeform and a pronoun:

The student has become the first American to gain legal designation as “genderless”, following a ruling by a Multnomah County judge.

The 27-year-old formerly known as Patrick Abbatiello, now legally designated agender, also got legal approval to change names, now going only by “Patch,” no surname. That name also serves as a pronoun, Patch explained to the local NBC affiliate this week.

“Even gender-neutral pronouns don’t feel as if they fit me,” Patch said. “I feel no identity or closeness with any pronouns I’ve come across. What describes me is my name.” – Heatstreet

So now it’s no longer adequate that you be allowed to officially be whatever established sex or race you “identify” with. If you identify with “none of the above” you can invent your own sex, race, pronoun, or non-carbon life form 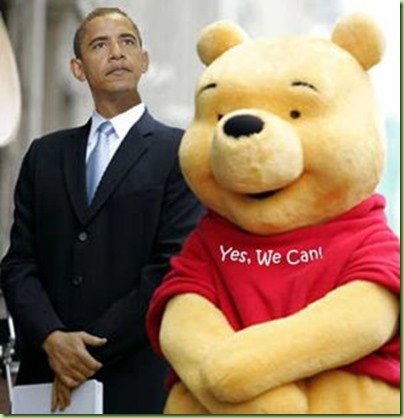 …and the rest of us will just have to adapt or be guilty of discrimination.

I’ve invented a new product that I think will prove to be invaluable in the New World Order of Gender-Fluid Society. Let me know if you’re interested in becoming an early investor. I think the market will be very strong. 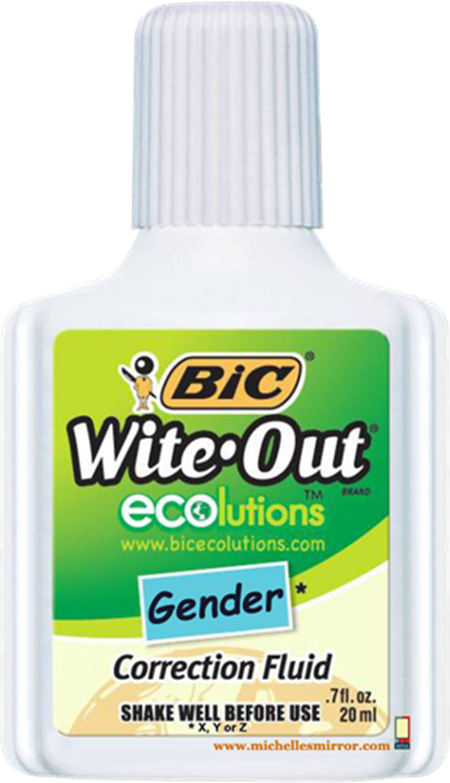 The All New Gender Fluid Formula! Works on all chromosomes!

The original racist, non-eco version is also available in an economical 12 pack in case you need to change the gender of your entire team: 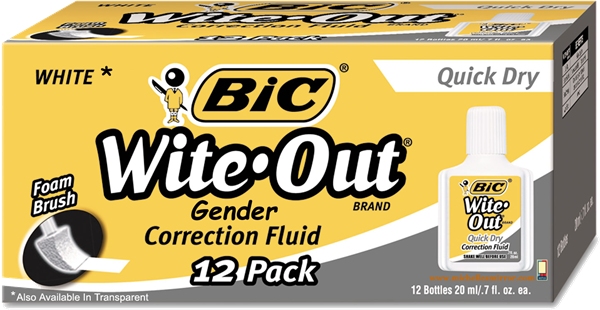 I think I’ll contact Patch, I’ll bet he could be a great marketing rep.

Looks like the final cultural battle will be between the Islamists and the leftists (even though they’re currently allies). The Christians have totally folded in front of the onslaught from both. The question that remains for them is which side they will join when the final battle begins.

What a judge rules is not reality. It is a legal decision. It does not change human nature. If it conflicts with human nature, it is wrong.

Robert A. Heinlein called it:
The Crazy Years
Considerable technical advance during this period, accompanied by a gradual deterioration of mores, orientation, and social institutions, terminating in mass psychoses in the sixth decade, and the interregnum.

5 posted on 03/27/2017 8:40:38 AM PDT by Little Ray (Freedom Before Security!)
[ Post Reply | Private Reply | To 1 | View Replies]
To: NOBO2012
The leadership of women's sports seems to have no problem with this. I suppose they calculate that any improvement in "female" performance is some sort of win for feminism, so it is better to keep silent and avoid pissing off the Gaystapo, who are such valuable members of the anti-Western Civilization coalition. At least until after The Revolution...

So, if it's OK with the NCAA and other governing bodies, it's OK with me. It's not like I actually watch any of these sports, anyway. :)

Such official action by a judge is what is known as legislating from the bench.

And what’s worse is that Oregon lawmakers probably have no plans to remove such a judge from the bench.

Autozone? Try O’Reillys — It’s cheaper and they have it for both automatic and stick-shift trannies.

As in many things, the old adage “follow the money”, probably applies here.
Women’s sports for the most part, are not doing well financially. If it’s a sport where both genders play (basketball, soccer, etc.), then the men’s version will be better, because the male athletes are better....more strength and speed etc.
What better way to increase interest, than to crank in transgender athletes? It will make it more entertaining.

genderless huh, we have the technology...

Guaranteed to lie about whatever gets them the most attention and causes the most destruction.

As far as spectator sports, I’d think that women’s springboard diving, women’s gymnastics, women’s beach volleyball, etc. would be the $$ makers. Who wants to watch the men’s versions of those in comparison?

While it may not be on the same playing level as pro football, “powderpuff” or lingerie football was sorta interesting. The problem is, any heavy contact sport or one which takes major athleticism is going to be dominated by men. But anything showcasing the delightful female form draws audiences out of proportion. At least, male audiences (ahem).

The ladies just need to learn where and how to “compete”. And it’s not in fields where brawn and muscularity are required. LOL