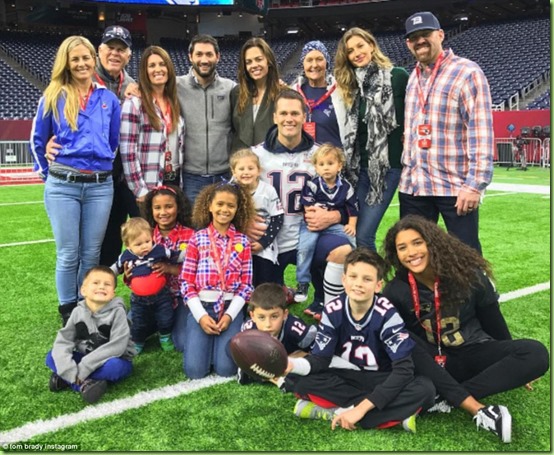 The #NeverBrady cabal was supposed to ensure that the hated Patriots lost yesterday’s battle. Gaia was supposed to be appeased by Brady’s complete and utter defeat, and the earth would once again begin to heal itself.

And it looked really good for Team #NeverBrady for awhile: after all, no team in Super Bowl history has ever come back after being down more than 10 points to win! Until they did.

The Super Bowl has NEVER gone into overtime! Until it did.

And nobody has EVER won 5 Super Bowl rings! Until somebody did: 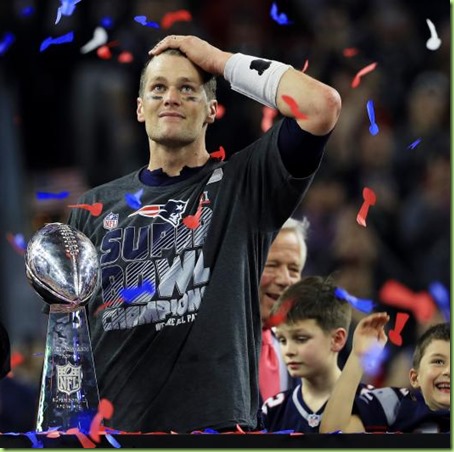 If I may repeat yesterday’s opening Lombardi quote: 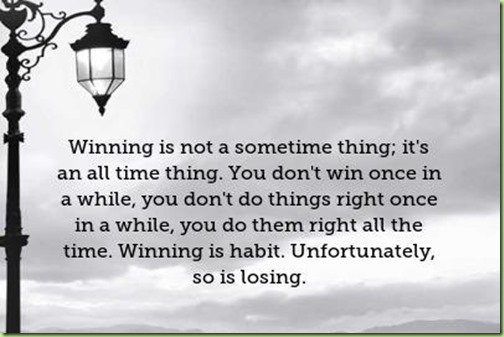 And so, against all odds, the Patriots won. How can that be? The fix was in! The #NeverBrady cabal immediately sprung into action: they declared that since Atlanta had accumulated more yards rushing they had actually won the game. They demanded that officials review all of the game tapes, looking for any uncalled penalties against the Patriots. They circulated internet rumors of Russian hackers on the sidelines, moving the yard line markers. They called Brady and Belichick and Kraft “haters.” And I hear that the FBI director called for a reopening of the Deflategate investigation.

But in the end it was all to no avail: like Trump, Brady and the Patriots won fair and square. And they did it the old fashioned way: they earned it. 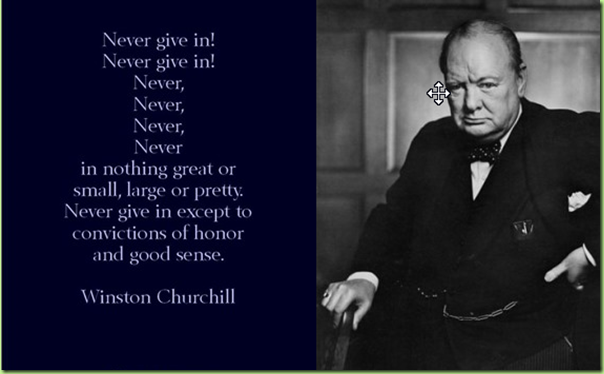 And no, I’m not tired of winning yet.

"It’s so early. I’m actually kind of a Barack fan. I think I’m a Barack guy. I think it’s a good fit at the right time. I have a gut feeling and that’s the kind of person I am. If they’re reading this in New York, Hillary would probably be a better call, huh?"

Stock futures are down.

Of course, there’s no reason for it, but it’s more accurate than many a published finance paper. 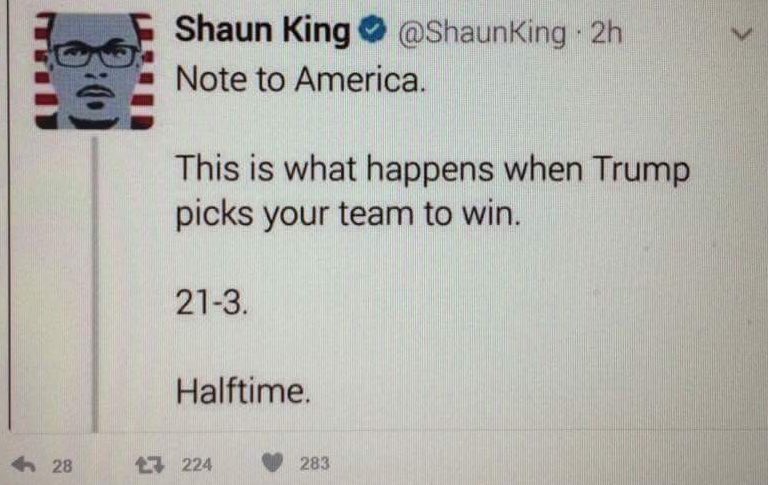 Arthur Blank, Falcons Owner, criticized Trump for his policies in general, and the Travel Ban in particular.

Robert Kraft, Bill Bellichick and Tom Brady have been Trump supporters for a while.

Because I am a Bills fan, NE is an arch nemesis. However, since the libturds came out against them NE got my support for the Super Bowl. Of course that ends when the next season begins.

Brady told Coach that someone stole his game jersey. Coach says they will have to look online

[Brady told Coach that someone stole his game jersey. Coach says they will have to look online]

There was an update this morning, it wasn’t stolen.
The Pats’ equipment manager hid it BEFORE it could be stolen. 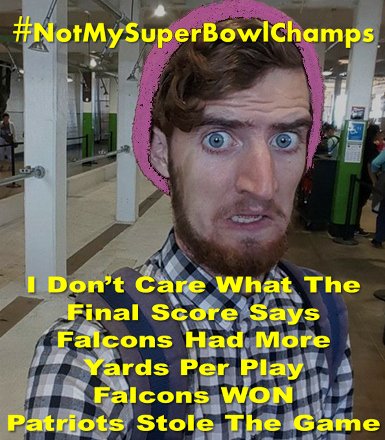 good thinking on the part of the equipment manager..

I didn’t watch the game..and not a football fan..but saw a clip of that catch by Edelman that has to go down in Superbowl history as one of the greatest catches.

Yes, yes, yes, the pat’s won. Brady won his 5th ring. One of them based on the most boneheaded play by a coach (Seattle) in which Seattle had the ball on the Pat’s ONE yd line with four downs to score and win the SB (no time left on the clock) and despite having the leagues best running back at their disposal they opted to PASS the ball and it was intercepted by the Pats, so game over.

Then we have the infamous call against the raiders in which Brady clearly fumbled vb ut the officials said he was :bringing the ball down and not attempting a pass, so no fumble. They went on the win this playoff game by a field goal and then on to win the SB. the league even created a rule (The tuck Rule) to back their decision. The rule was later rescinded.

Then of course there is the fact they play in the weakest (until perhaps this year) division in football and have a very favorable schedule every year.

Finally there is the cheating, the cheating not in the SB but during the process of getting to the SB.

The NE Pat’s like the Chicago Black Sox will always be known for this and it tarnishes their accomplishments.

15 posted on 02/06/2017 6:01:41 AM PST by billyboy15
[ Post Reply | Private Reply | To 1 | View Replies]
To: headstamp 2
It was the proverbial kick in the stomach to all the smug halftime tweets that went out last night, from various leftists, chortling how Donald Trump has finally gotten his "comeuppance" because "his boys" were losing the Super Bowl.

C'mon, it's just a football game! The outcome of which should have absolutely no bearing on the Trump presidency in any way, shape or form. Trump's "prediction" of the Pats winning just before the game to Bill O'Reilly was all in good fun and the Super Bowl game was supposed to be a four-hour diversion from the nonstop 24/7 divisiveness that the Left is trying to propagate over this election. Instead, we had thinly veiled political statements in some of the Super Bowl ads and all the anti-Trumpers were having a field day with that halftime score and the certainty that the game was lost and that Donald Trump would "suffer" for it in some small and insignificant way. (Likely, Trump would have tweeted congratulations to the Falcons for a game well played had the score held up.)

So I'm kind of glad the Pats pulled it out for the reason that once again, these nitwits from the Left celebrated prematurely and had their heads handed to them. Just like on Election night when they were bragging on Hillary's "90 percent chance" to win the presidency up until about 9:30. Which ironically was about the same time that the Patriots started their 4th quarter rally last night. As each Patriots touchdown was scored, I was thinking OHIO...WISCONSIN...PENNSYLVANIA!

Very fitting that head coach Belichick and QB Brady were the ONLY major figures in the NFL to come out for Donald Trump prior to the election. Like I said, the leftists got yet another well deserved kick in the stomach. I don't care which team one normally roots for, if you supported Trump than you had to feel good about what transpired last night (with the possible exception of Falcon fans).

Now about those chicken wings and all those chips and dip and all those other "obligatory" junk foods that people feel compelled to spread on the table for the Super Bowl, I had nary a one. I had brussels sprouts. I had two thick slices of prime roast. A sweet potato. A handful of raw almonds. And all the beer I could comfortably drink and still get up for work in the morning.

Right up there with the David Tyree catch. 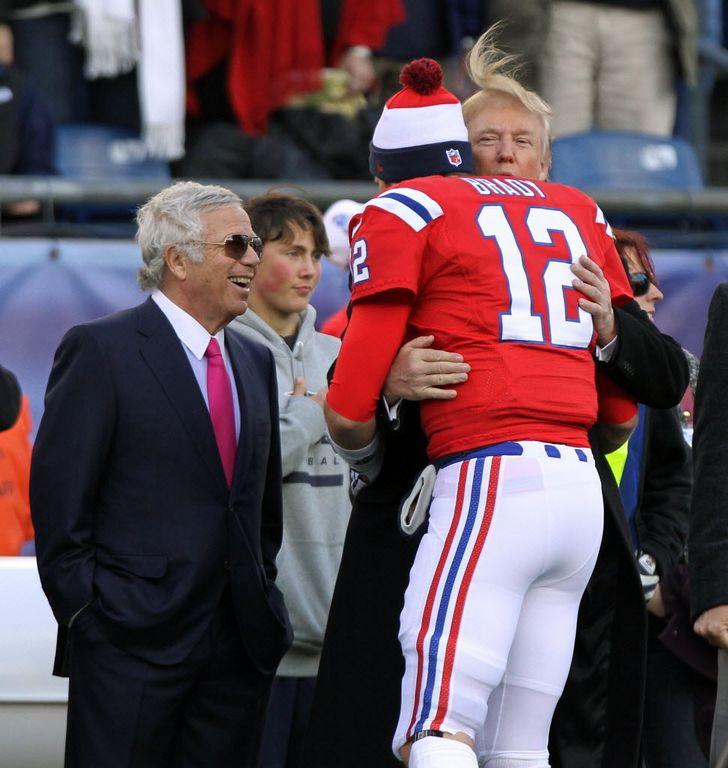 Don't worry Mr. President, I got this. #SuperBowl 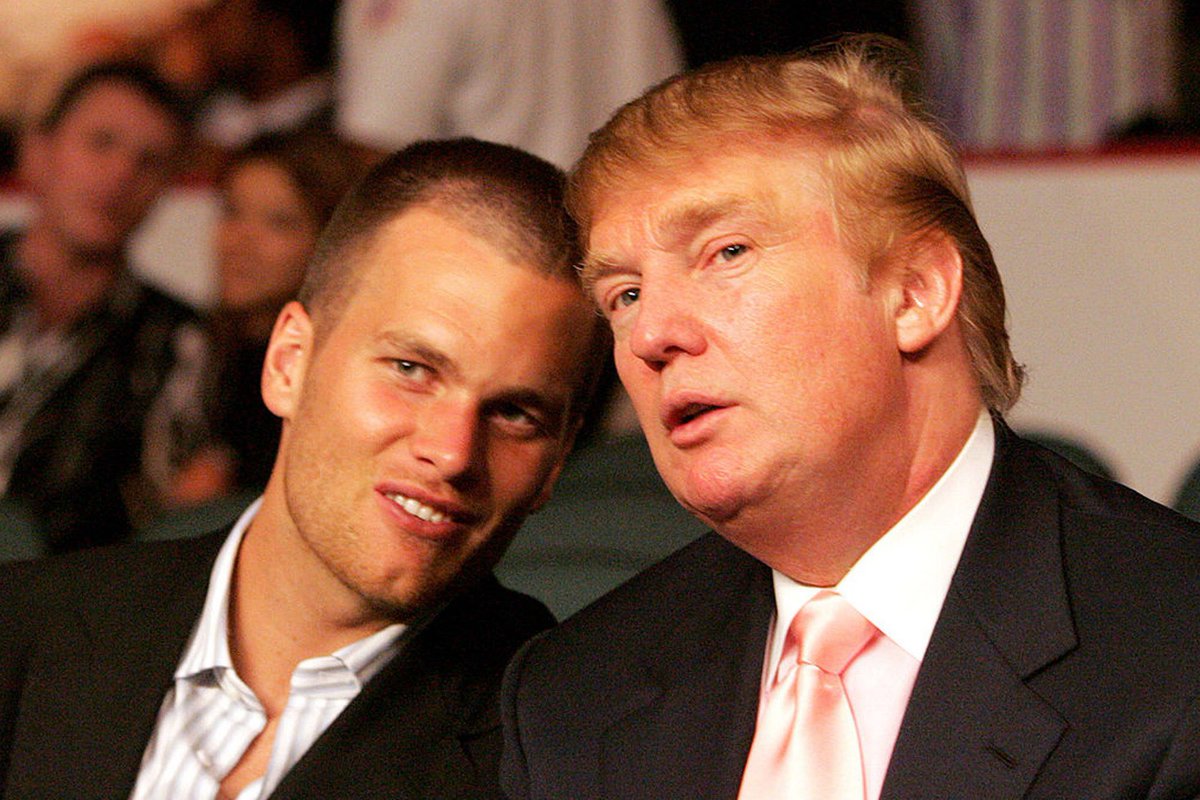 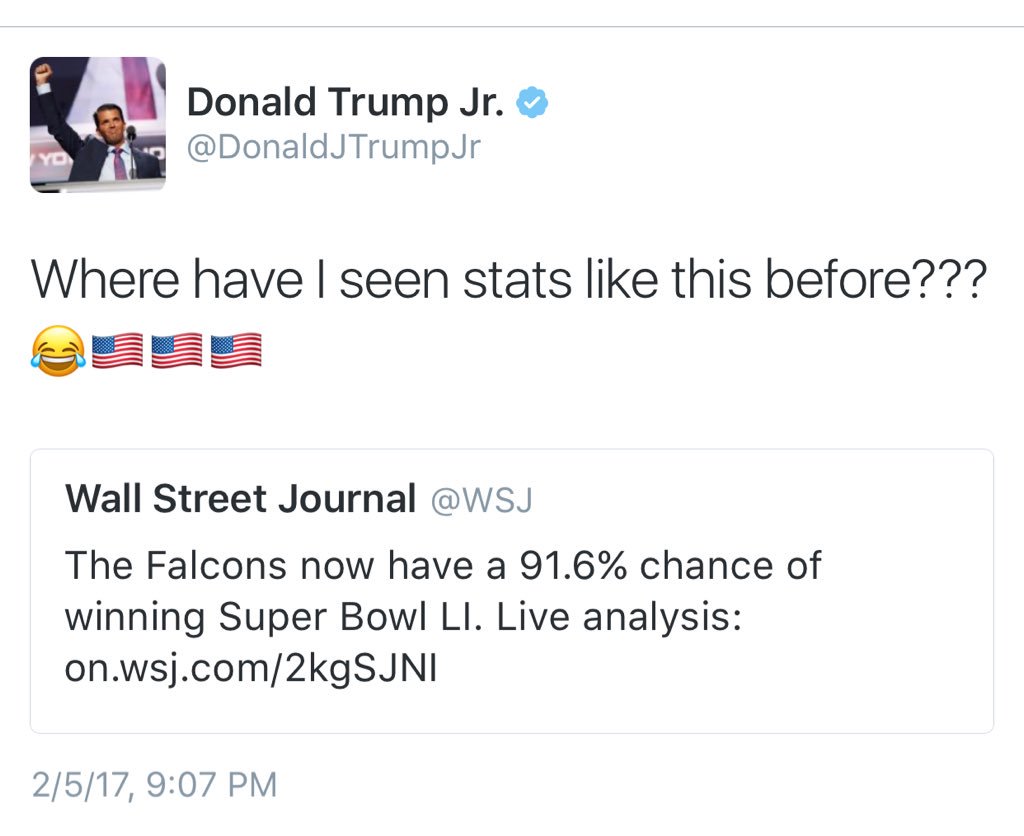