Here’s your early Christmas present: and the winner is… 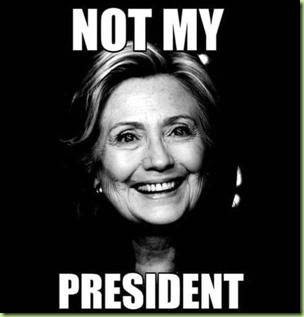 The Electoral College dealt Big Media and Democrat Hillary Clinton one more final embarrassment. With nearly all the Electoral College votes cast, the former secretary of state set a 104-year record for the candidate with the most faithless electors…For all the headlines focusing on one faithless elector in Texas who turned out to be a complete fraud, it would really surprise you to hear that Mrs. Clinton not only lost more electors than President-elect Donald J. Trump, but the most of any candidate in over 100 years.

I posted this on election night and I hope you’re not getting tired of it listening to it because I’m not tired of winning yet. Dedicated to Donald J. Trump’s victory, against all odds - because he insisted on doing it his way:

Regrets, I've had a few
But then again, too few to mention
I did what I had to do
And saw it through without exemption

I planned each charted course
Each careful step along the byway
And more, much more than this
I did it my way

Yes, there were times, I'm sure you knew
When I bit off more than I could chew
But through it all, when there was doubt
I ate it up and spit it out
I faced it all and I stood tall
And did it my way.

I don’t know about you butt I’ve got a lot of stuff to do this week so if you’re not busy shopping or baking cookies please carry on. Recipes are always welcome butt Thursday will be official Christmas recipe day so plan accordingly.

There is so much more winning that needs to happen. We’ve only just begun.

With the exception of the Gippers eight years, we have faced almost unrelenting defeat and humiliation from our leaders for the last half century.

There is a hell of a lot more winning to do before we’ve made up for that !

How did the electoral college go?

...How did the electoral college go?

Fringe lunatic liberals in tatters and shreds, USA turning around. Not tired of winning. Best Christmas ever.

Me neither. But I did read something this morning that the ever tolerant kindly moochie is more than willing to help Mrs. Trump set up house and will keep her door open. Awwwwwwww:

The faithless elector record should give her a clue.