Perhaps this explains that “you’re dead to me” look in Big Guy’s eyes while toasting his guests at Tuesday’s State dinner: 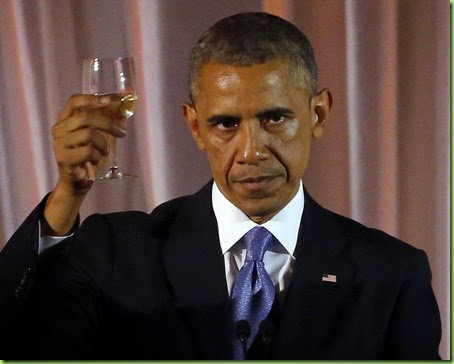 To the dictators! Long may we not “just be standing around.”

Or if that’s not it, maybe it’s because of this:

A new Wall Street Journal/NBC News poll found that despite the steady pace of hiring in recent months, 76% of adults lack confidence that their children's generation will have a better life than they do—an all-time high. Some 71% of adults think the country is on the wrong track, a leap of 8 points from a June survey, and 60% believe the U.S. is in a state of decline.

Yikes! That’s going to leave an ouchie somewhere. Looks like all those low-paying, part-time jobs being created in this, the fifth year of our summer of robust recovery, just aren’t delivering on the American Dream. The paychecks they’re generating just aren’t big enough to get the lost generation out of Mommy and Daddy’s basement and pay back those exorbitant student loans they took out in order to obtain their valuable degrees in “Something-Or-Other Studies.”

Anyway, all of this bad economic news might explain this peculiar exchange between John Kerry and former President Jimmy Carter: Former President Carter told John about the help he got back in the 70’s on how to handle a continuing bad economic environment:

“My predecessor gave me 4 envelopes and told me to open one each year, should the economy fail to improve. At the end of year one I opened the first envelope and it said ‘Blame the economy on your predecessor,’ which I did. At the end of year two when things weren’t any better I opened the second envelope and it said ‘Blame the opposition Party,’ which I did. The advice at the end of Year 3 when things were still going down the tube was ‘Blame the American people themselves and tell them they’re not doing enough,’ which I did. Then, when I got to year four and the economy was still on the rocks I anxiously opened the last envelope and all it said was ‘Make out 4 envelopes…’ so I don’t think I can really help you here. If you’d like some advice on securing peace in the Middle East however…”

Apparently Big Guy’s staff figured out how the economy-envelope game worked before getting to the 4th envelope. They hijacked it and revised it to read: “Blame all the racists who are hatin’ on you” and have been ridin’ that horse ever since.

Unfortunately, they forgot to make out an envelope for year 5, so all I can say is: bye-bye American Pie! It’s been a sweet ride! 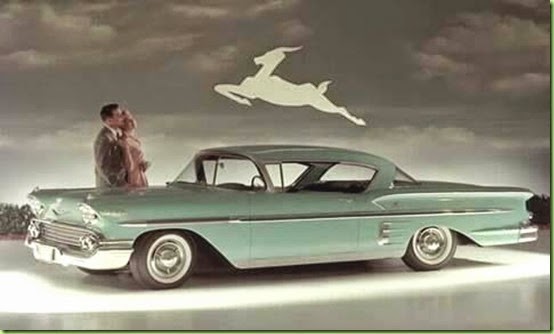 Now THAT was a sweet ride!

The man is looking a little more evil as time goes on. I’m surprised there were no horns showing in that pic...

Nice going, 0. You got Whitey where you want him - taking his money and preventing him from getting a job.

The treasury has been looted just to the point of collapse, now for a plausible exit strategy...

Why didn’t our ‘Coming to America’ President take his new friends to Detroit?

I do not want to write the USA off just yet. If we get rid of the Marxist in Chief and start to flush out his fellow travellers in the alphabet agencies the natural excellence of the USA will burst forth once again and in a very short time begin to replace the manure spread by the Marxists with the fresh green grass of free men at work for their own betterment. JMHO!

The African dictators weren’t there just to bask in the glory of the “leader of the free world”. They came to Washington to give Barry advice on how to be a “transformational leader”.

Two more years and the nightmare is over.....although, I thought the 70’s were incredibly worse. I couldn’t stand the politics of that time and I was 10 in 1979....go figure. Sitting in the car for HOURS waiting on gas in a line was horrible especially since we did not have the wonderful conveniences my kids have today. Those lucky little ones......lol. Thanks to their Grandmother, all four children have their own I-PAD to keep them busy. (of course with all the entertainment they have available, they don’t have to stand in gas lines......unfair world....lol).

Maybe “O” is trying to parlay his ‘god’ status here in America into something that will be equally tangible and lucrative for his retirement, in one of THEIR countries.

“I’m surprised there were no horns showing in that pic...”

With evil as pure as his, he is able to conceal them at
will. 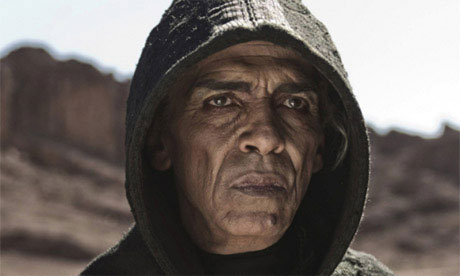 He hasn’t been “indwelt” yet.

I can smell the sulfur.