For those of you who’ve been missing the fashion updates of the recently shuttered Mrs. O site, good news! I think she’s taken her keen eye for fashion over to Huffpo. At least this sounds like her:

Velvet and patchwork and shine -- oh, my.

Michelle Obama, along with daughters Sasha and Malia and mother Marian Robinson, arrived in China Thursday, but you'd never know by looking at them that they just took a 14 hour flight.

The ladies of the first family not only look fresh-faced, but extremely fashionable as well in their travel outfits. FLOTUS stunned in a body-hugging black, tan and white Derek Lam dress (and thigh high boots!!), while Sasha and Malia chose bold, colorful skirts.

The first lady is in China to discuss the importance of education (and NOT politics), but the family will get to do some sight-seeing as well. We can't wait to see what else these gorgeous ladies will wear on the trip.

She does know that Air Force Won Two is decked out like a 5 star hotel. right? Why wouldn’t these “gorgeous ladies” appear fresh as flowers? 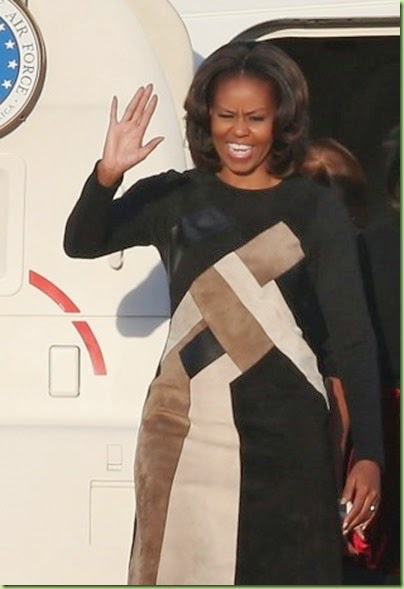 As you’ll see from this NYT report - accompanied by State (China) approved photos, the gorgeous ladies are holding up their end of the bargain. Today was a potential mine field however, as Madame Peng chose “three quintessentially Chinese specialties” for Lady M to try her hand at: calligraphy, 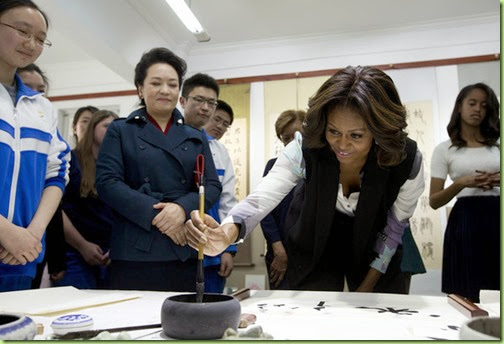 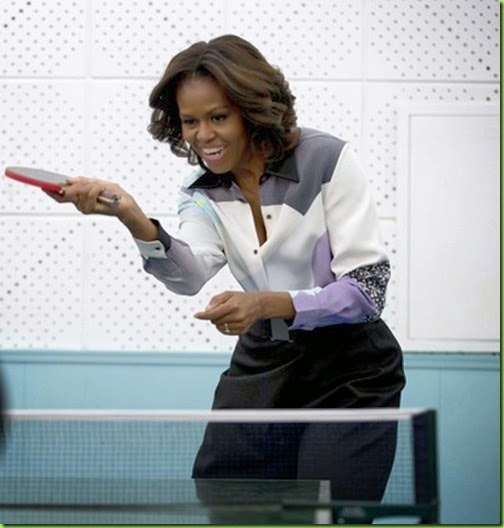 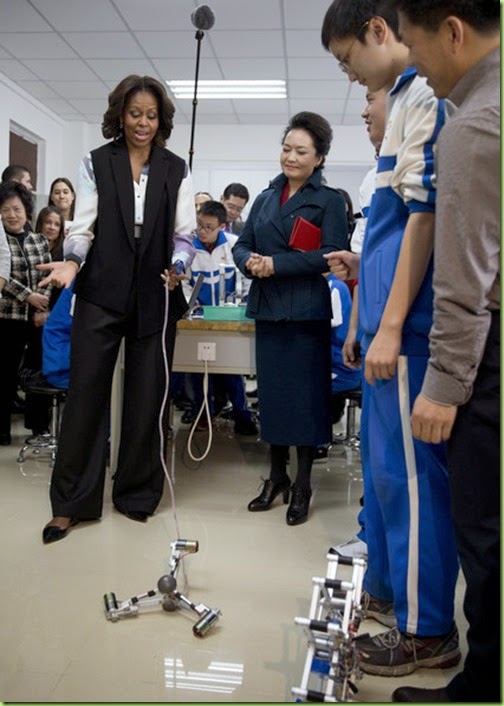 “I’ve heard of math and science.”

Except for the table tennis, the others were challenging - have you ever seen MO’s handwriting? And everyone knows you don’t need math in law school or Washington D.C.

Fortunately we had a packed schedule and couldn’t spend much time at any of the activities. Next, we managed to squeeze in a whirlwind tour of the Forbidden City, where all the commoners were swept away to make it easier for our special guests to get around – just like back home! 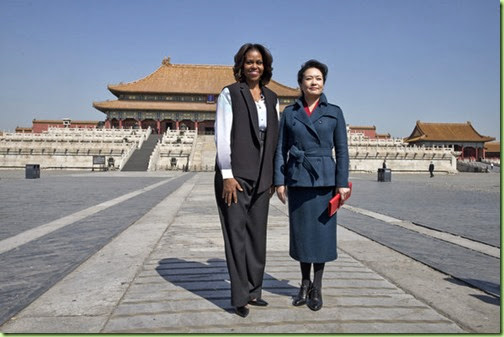 “The family were swept through the Hall of Supreme Harmony, and the Hall of Earthly Tranquillity, where the emperor’s concubines lived and slept on a bed covered with red brocade.” 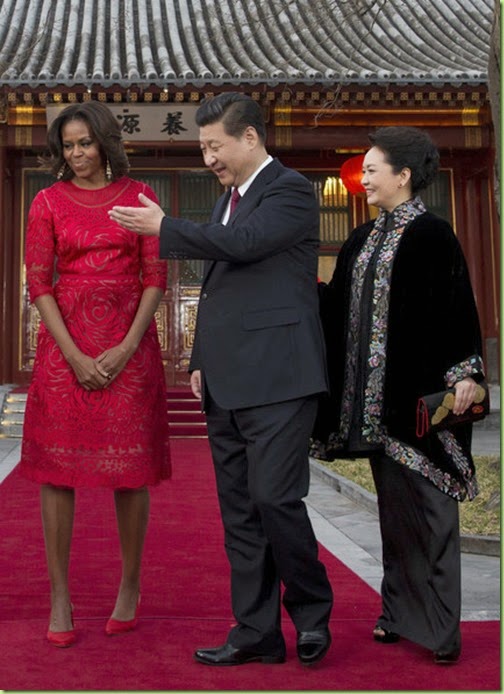 MO, in Imperial Red brocade, at the Diaoyutai State guest house in Beijing

You’ll also be relieved to know that we haven’t had to deal with the smog so far, as a stiff wind arrived to clear the skies:

Others commented on how Mrs. Obama was greeted by a blue, pollution-free sky. “Now Michelle’s here, it’s immediately bright and blue again.”

A breath of fresh air! Again, just like in Washington.

Tell me that wasn’t supposed to be “Breaking Wind arrives in the Forbidden City.”

Remove the colon from the headline (hehe) and you’re onto something.

probably after she eats all that duck!

Must be her Indian name. She picks up a bus and throws it back down as she wades through the center of town.

I’m guessing somebody had some fun with punctuation here.

Should have read “BREAKING WIND FROM FAT BOOTY ARRIVES IN CHINA.”

She has the whole “Worker Genre Style” adorned on her ample frame.

14 posted on 03/21/2014 8:13:19 AM PDT by Gaffer (Comprehensive Immigration Reform is just another name for Comprehensive Capitulation)
[ Post Reply | Private Reply | To 5 | View Replies]
To: NOBO2012
When the Wookie lets one go, everyone should stand way back and hold on to their hats. 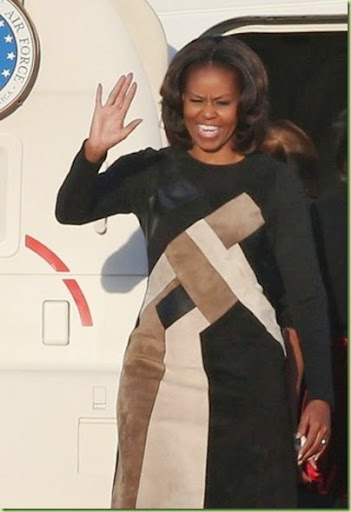 That pantsuit — she has a totally ghetto idea of what to wear in a foreign country. She thinks travel is like when her family packed the picnic chest to go play toss and drink beer down at the city park.

No, the colon's an essential part of breaking wind.

“what is the POINT of such disjointed geometric patterns on items of CLOTHING?”

To draw your eyes away from her hips and fat ass.