Some are whispering that Hillary is too old to run for president. 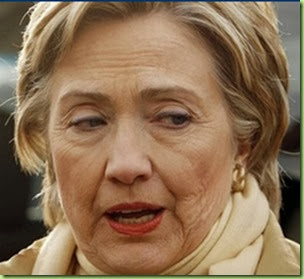 But that’s clearly not the issue, as Hills will only be 69 when she runs for president in 2016. Ronald Reagan was 73 when he ran in 1984, as was Bob Dole when he ran, and John McCain was 71 for his run against Hope and Change. 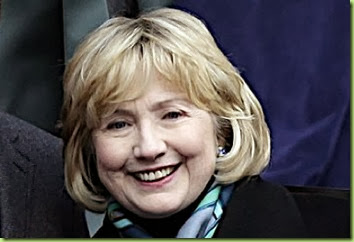 And before you squawk “SEXISM!” allow me to point out that weight is a legitimate issue for both sexes; just ask Chris Christie. 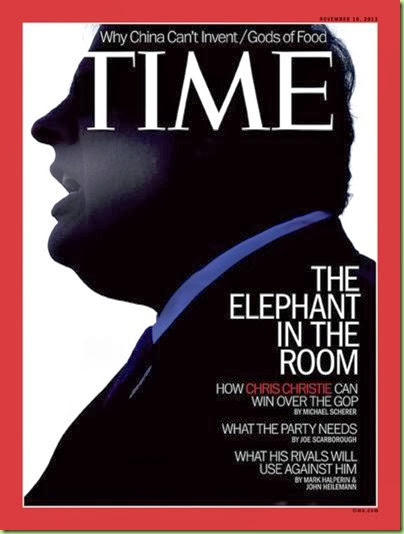 Now I’m not saying that Hills is Chris Christie fat: 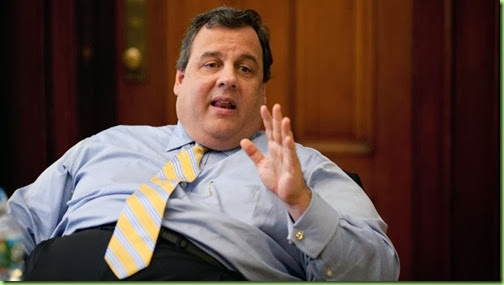 Butt now I see there’s a new whisper campaign asking “is Hillary too sick to run?” with irresponsible innuendos of a brain tumor. This is a red herring. I’m not sure who tossed it out: It may have been Hill’s own campaign team, seeking to establish health-fueled plausible deniability argument for her abdication of responsibility in Benghazi. 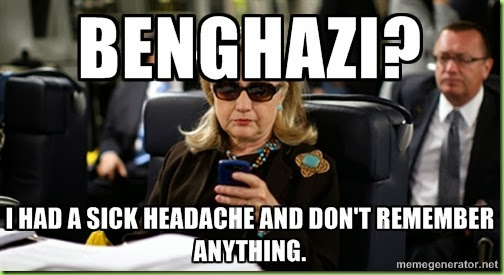 If it was her political enemies, then it’s intended to undermine her overall fitness for office. If that’s the case, it probably won’t fly, as we’ve gone for over 5 years without knowing whether Big Guy is physically fit enough to run the country. To establish a new standard now and demand to know about Hillary’s health would be outright sexist – so don’t be expecting the MSM to bring it up; we all know that’s the purview of the GOP. 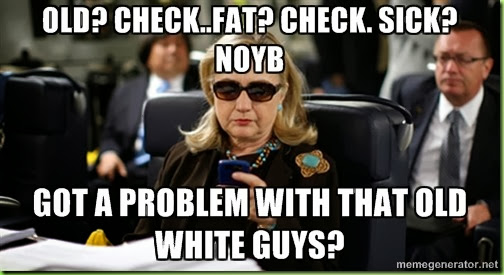 All I can say, is that even if Hillary has lost those thick, lush “boy eyebrows” of her youth: 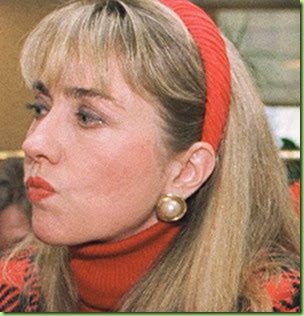 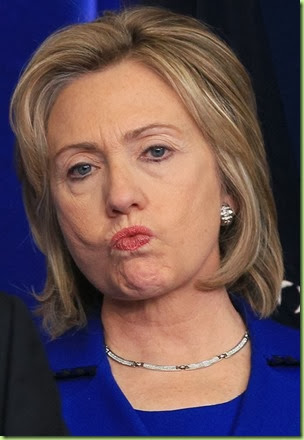 And that’s all that’s necessary to be President. So don’t worry about her suffering from a serious brain disorder, she’s the smartest woman on earth: 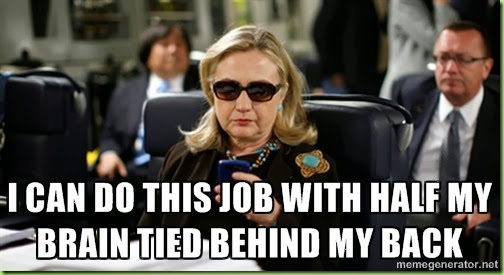 (with apologies to Rush Limbaugh)

funny. plus, learned what NOYB means.

what does it mean you ask? none of your damn business, so don’t ask

Baggy butt sags with flab, reminding us of an ugly manatee, but no mermaid is she now, nor ever was. She is a tired old version of a bad young version.

She can sit in a wheel chair and order her enemies death.

My wife in her mid 70’s has been a RN all of her life until she retired last summer.

She worked in a busy FP office as the head RN. One of her skills developed over the decades was quickly to look at a patient, new or old, to evaluate their overall look, walk and verbal skills.

If she spotted something that was new or old that could be a problem, she told the doctors about it. In the words of one of the doctors, she worked with. She was the early warning/monitoring system for the doctors.

This past week, she watched Hill on Fox News trying to defend Obama Care. Besides the rambling on, my wife noticed that Hill barely used her left hand and arm during her rambling.

My wife noted that Hill’s face was swollen and puffy. My wife’s prelim observations were: Hill is an older woman with some potentially serious alcohol and aging problems, and she may be losing some control over her left side with her hand and arm. She is probably prone to falls and tripping. Last but not least, her memory and acute mental skill were slipping away.

The Vice President in the series “Scandal” (”Sally Langston”) had to have been drawn from life to represent Herself, Madame Benghazi, the Cold & Joyless. While superficially, the politics are quite different, the same ruthless and self-righteous nature are at the forefront, an ambitious and not especially flexible thinker has ridden ideology all the way up to the current slot, and chafing at the limitations, the character is seeking the Presidency on her own. This has led to several bizarre and highly unethical situations, including what any objective observer would call murder of her philandering husband.

Remember, all these characters are being pictured as being vaguely “Republican”, but that is just subtle propaganda. Their activities much more nearly resemble that of liberal Democrats, which shows the bias of the writers on the show, and to some degree, the actors themselves.

Like Carroll O’Connor playing Archie Bunker, an obvious caricature. But that is the picture that many people have of “conservatives”.

I will never forgive her for Benghazi, let alone all the other murder and mayhem she has wrought on this nation.

Here’s hoping the rumors about her state of ill health are true and it’s almost time for her dirt nap. Maybe the unnamed illness will first destroy the part of her brain that allows her to lie (I guess they’d just keep her away from the press, but it would be sweet to hear true confessions pass from her lips).

As a suitable monument for her grave site, I would suggest an unplumbed urinal.

Nothing matters except the sweet little lies that the Illiterate Electorate love to hear.

NEVER underestimate the stupidity of Americans. They wanted this current POS twice.

Shitlery will be the next _resident. The PTB want her. It’s so obvious. This country is toast.

Put her on queen moochelle's diet; then instead of being as big as a horse, she'll be a horse and a half!

13 posted on 03/01/2014 11:23:13 AM PST by The Sons of Liberty (Who but a TYRANT shoves down another man's throat what he has exempted himself from?)
[ Post Reply | Private Reply | To 1 | View Replies]
To: NOBO2012
I'm wondering why the republicans aren't attacking the democrats about Hilary running and not the VP, Biden?

I think we should be constantly pushing Biden in their faces as their premier candidate.

Doesn't the vice president position mean anything to these people?

Her falling and tripping is probably in direct proportion to the amount of adult beverages she guzzles.

I'm envisioning a bipartisan political get together where alcohol flows freely, attended by Boehner just drinking and crying and Hillary falling and tripping..............what a circus..............the Soviet Union had their boris Yeltsin and we have our Boehner and Clinton...........is America great or what???

OK. The Democrats went with Obama because he could win. They didn’t go with him because they thought he was a great executive. Do they think Hillary will win? Then, they’ll run her.

Think how many FReepers incorrectly forecast her husband croaking 10 yrs ago.

Now he's got a new squeeze and ready to hammer the campaign trail. 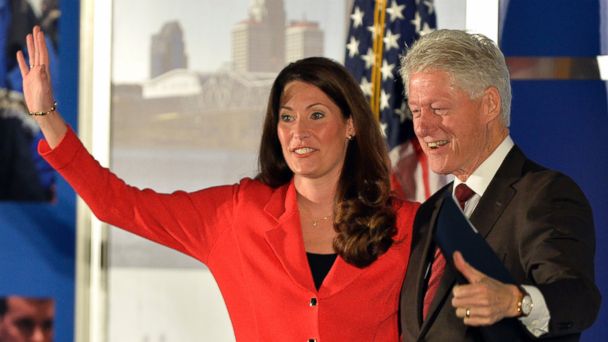 17 posted on 03/01/2014 12:14:28 PM PST by nascarnation (I'm hiring Jack Palladino to investigate Baraq's golf scores.)
[ Post Reply | Private Reply | To 11 | View Replies]
To: blueunicorn6
If hillary runs for president, we should worry very seriously about who gets the VP nod. Because hillary doesn't seem to be in any kind of shape to survive campaigning, let alone being president, that's who we'd get.

I've become so cynical. I would not put it past either political party to run with someone who can't survive the ordeal and then get a VP as president who hasn't been fully vetted by media and opposition scrutiny. Kind of like Paul Ryan.....we actually thought he was a good guy.

I think that will be a significant factor for the Dems to inspire the entitlement army to get out and vote.

You’ll see a DeVal Patrick or Cory Booker as VP and the community organizers will be offering up a “wink wink” about Hillary’s health.