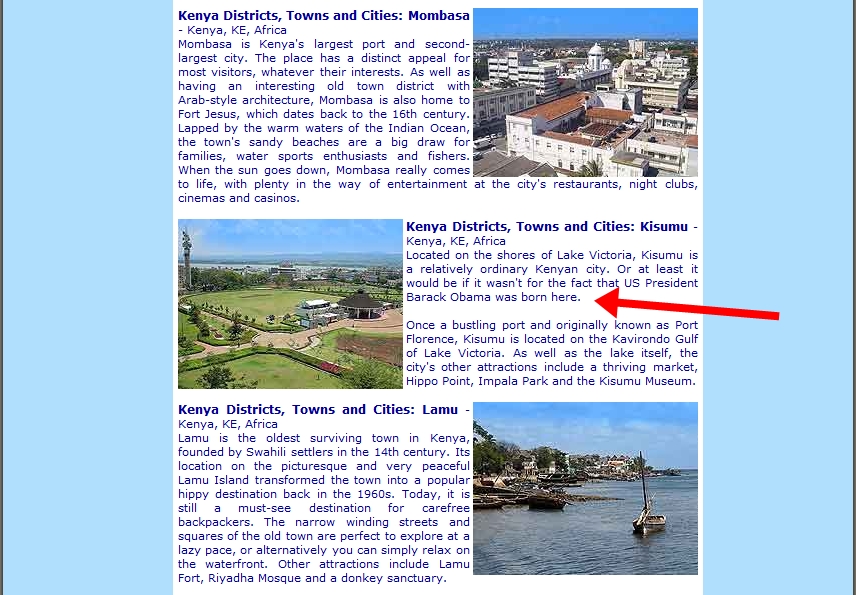 Travel arrangers everywhere are putting in calls to Jerome Corsi, right now. Did BirtherReport find this on their own?

Not meant as a slight to Corsi but, really, is there someone willing to get there ^quick^ and do the background work to verify this claim (starting with the Kenyan equivalent of the Kisumu Chamber of Commerce)?

It's one of several. It illustrates the idea of Obama supposably being born in Hawaii (which has still never been legally proven), has apparently never been as widely known as paid Obots claim. How do all these places get it "wrong," unless Obama (along with his cohorts) has helped perpetuate the idea at some point or another?? Maybe this site heard Obama's wife say Kenya was her husband's home country??

Well that settles it then.

A “Barack Hussein Obama” WAS born in Kisumu, Kenya, only it was the FATHER of the current loser living in the White House.

Recently, World Guides was delighted to launch its guide to Kenya which included a section on the towns and cities of the country. On this page was mention of the Kenyan city of Kisumu an ordinary city if it wasn't for the fact that US President Barack Obama’s father was born here.

You can see where I'm going can't you... Yup for whatever reason, despite the stringent editing process that all our guides go through, the all important word father disappeared into the ether.

So to clarify matters for all those bloggers and conspiracy theorists out there searching for evidence that the US President is not legally entitled to his position - World Guides was making no claim to the President's birth place and has no confirmation of this information with any documentation or proof.

So this highly embarrassing ‘typo’ has now been corrected on our site, however, I'm sure if you really want you can find screen shots of the original posting all over the Internet.

As to whether this error was a publicity stunt to encourage Kenyan Tourism or to advertise the World Guides websites for free, well that's something I'll leave to the conspiracy theorists...

P.S. Piece of advise to the website claiming Obama’s birth place claims came from ‘Official Kenya World Guides’. World Guides are not official guides and have never advertised as such - thus you may wish to change your meta titles etc. After all one word can make all the difference - take it from people who know!

Interesting. Maybe they were just trying to drum up as much business as they could until they were called on the carpet?

Looks like they got a call from the White House to “correct” their entry.

This excuse doesn’t hold up to scrutiny since Barak Sr. wasn’t actually born in Kisumu. Evidently he was born in the Rachuonyo District instead.

He was born in Kenya...from all other info, this isn’t his birth town. His cousin who is PM has his original birth records in his safe.

Or so some sources say. Others put the birthplace in Kanyadhiang (which looks like it's in the Rachuonyo District) or Kogelo (which isn't). I'm not sure how exact anyone can be for someone born in an African village--the best they can do for his birth date is "1936." Kisumu may just have been the first one to promote it as a tourist draw.

The problem is that Barak Sr. isn’t a tourist draw, which is why it makes sense they would claim Pres’ent Obama was born there.

The problem is that Barak Sr. isn’t a tourist draw, which is why it makes sense they would claim Pres’ent Obama was born there.