My name is Tony Bobulinski. The facts set forth below are true and accurate; they are not any form of domestic or foreign disinformation. Any suggestion to the contrary is false and offensive. I am the recipient of the email published seven days ago by the New York Post which showed a copy to Hunter Biden and Rob Walker. That email is genuine.

The email includes a note that “Hunter has some office expectations he will elaborate.” A proposed equity split references “20” for “H” and “10 held by H for the big guy?” with no further details.

What I am outlining is fact. I know it is fact because I lived it. I am the CEO of Sinohawk Holdings which was a partnership between the Chinese operating through CEFC/Chairman Ye and the Biden family. I was brought into the company to be the CEO by James Gilliar and Hunter Biden. The reference to ‘the Big Guy’ in the much publicized May 13, 2017 email is in fact a reference to Joe Biden. The other ‘JB’ referenced in that email is Jim Biden, Joe’s brother.

I know just as much as you know.

Q's posts tonight SEEM to indicate that Wray and Haspell may be on the outs.

Q posted some underlings of theirs. Will they move up into the director's spot (acting/permanent) or are they on the outs too?

Q SEEMS to indicate that, if Haspell is on the outs, that someone without CIA background will take her place.

That's what I know. 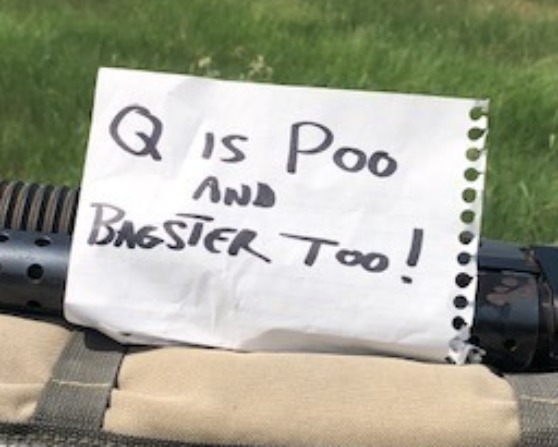 Up thread, someone posted something from Lame Cherry-I have a vague recall of the name, but never really did any reading/research.

The glaring exclusions in this are the groups who murdered LaVoy Finnicum in the FBI and BATFE. Homeland Security does not trust those two agencies to protect the President or this Government. ...snip...

Literally the main intelligence and security branches of the United States in CIA, FBI and BATFE are involved with image Obama in the American Intifada and are at war with the rest of the security and intelligence services.

The American Intifada of Barack Hussein Obama has begun. They tried to get the President in a coup of Russiagate, tried to impeach him by Adam Schiff framing.

They tried to infect this President with Coronavirus, and now Obama’s coordinated terrorists with agencies inside the government supporting them are trying to assassinate the President by a mob, with regime operatives doing the Kennedy deed.
As this looks like 1963 AD in the year of our Lord, it is logical that there is a Lee Harvey Oswald being set up in this. ...snip...

In analysis, for this group of traitors to go to these extremes, indicates that US Attorney John Durham is going to indict a blow to these traitors, which will implicate Obama Inc.

The problem in this is the hundreds of thousands at CIA, FBI and BATFE and their paid operatives who are still going to be there, as they are the ones pulling the strings of the Black rioters.

All that stands between the end of all we know is this Praetorian Guard.

The mostly hidden war? Will USA citizens have to wait half a century to find out all the stuff that really has happened-will 60% remain classified and hidden forever?

Well, I don’t know either, but I just posted a theory from Lame Cherry:

Thank you. Sometimes I kind of fog-out trying to understand who is on first or 2nd etc. Though I may mostly need sleep.

John Solomon pointed out in an interview today, that the email in question, in which giving ‘the big guy’ aka Joe Biden his cut was discussed, was sent in May of 2017, which was after Biden had left office. Besides being unethical, I’m not sure if any law was broken since he was no longer in office at the time.

Of course the famous incident in which Biden bragged about getting the Ukrainian prosecutor fired did occur while he was in office and is clearly illegal since the emails establish that it was a quid pro quo. I’m sure there are many other instances that occurred while Biden was VP that will be exposed eventually.

It is very encouraging to think that Wray & Haspel may be fired sooner than later. Thank you. Hope is priceless.

Ya gotta be quick to land on the number you think you are getting. My element is used to make a mean acid.

The President of the United States has been aware that the FBI has been covering up the Biden crimes for almost a year, in the proof of that laptop, and the President orchestrated all of it. While the coup plotters were playing their game to get the President, Donald Trump was playing his game to perfection.

I do believe that Q531 identified a key strategy that the President and the Q team has been using. The famous chess game was Marshal v. Capablanca and white plays very convicingly as if losing the entire time while black moves in hunting relentlessly. At the very end, when all looks lost, white suddenly wins. White was winning all  along.

When the president is loudest in his complaints, I think I glimpse this strategy. Often people complain when they feel helpless. I think President Trump has a bit of a challenge trying to look/seem helpless or like he's losing, but he compensates through a variety of strategies, some as simple as complaining. The press eats it up, just as intended.

The overall strategy that had so many fearing he would be pulled down in the coup seemed to be more of the same. Throughout the impeachment hoax, the POTUS could pull down any/all of the traitors one at a time, single file, in pairs etc. as he wished.

But this is multi-demenstional chess and the objectives are so much greater. As great as the Great Awakening. Ending the torment might be quicker and less painful, but too much of the citizenry would still be asleep.

Matt Murray is the Editor in Chief of the WSJ.

Haha I saw that!

Directly below McEnany’s retweet of Eric Trump’s gif, his tweet of the gif has a bit better graphics:

Did Hussein contact Matt Murray in attempt to persuade not to publish?
Will Murray follow the truth or buckle to pressure? DC civil war.
Watergate x1000.
Q

Who is Matt Murray, and publish what? I got the Hussein part and the Watergate part.

“ Sources familiar with the matter told Breitbart News that Bobulinski is the person whose allegations and inside information are the centerpiece of a forthcoming investigation by the Wall Street Journal. That Wall Street Journal story has not published yet, several days after the newspaper staff indicated to some the piece would come out—it is unclear why the Journal has not yet published—but President Donald Trump hinted on a conference call earlier this week that such a story was coming from the newspaper.”

From the Breitbart article

Murray is Editor-in-Chief of the Wall Street Journal.

Trump had referred (on a fundraising call, I believe I read) to an additional piece coming out in the WSJ on the Hunter/laptop/Biden$ saga, but it hasn't hit yet.

Apparently the pressure on Murray to deep-six the piece is enormous, and coming directly from the O.

Thank you for being gracious about it.