TOPICS: History
KEYWORDS: milhist; realtime; worldwarii
Free Republic University, Department of History presents World War II Plus 70 Years: Seminar and Discussion Forum
First session: September 1, 2009. Last date to add: September 2, 2015.
Reading assignment: New York Times articles delivered daily to students on the 70th anniversary of original publication date. (Previously posted articles can be found by searching on keyword “realtime” Or view Homer’s posting history .)
To add this class to or drop it from your schedule notify Admissions and Records (Attn: Homer_J_Simpson) by freepmail. Those on the Realtime +/- 70 Years ping list are automatically enrolled. Course description, prerequisites and tuition information is available at the bottom of Homer’s profile. Also visit our general discussion thread.
1 posted on 05/13/2013 4:57:58 AM PDT by Homer_J_Simpson
[ Post Reply | Private Reply | View Replies]
To: Homer_J_Simpson
Selections from West Point Atlas for the Second World War
The Far East and the Pacific, 1941: Status of Forces and Allied Theater Boundaries, 2 July 1942
India-Burma, 1942: Allied Lines of Communication, 1942-1943
2 posted on 05/13/2013 4:58:31 AM PDT by Homer_J_Simpson ("Every nation has the government that it deserves." - Joseph de Maistre (1753-1821))
[ Post Reply | Private Reply | To 1 | View Replies]
To: Homer_J_Simpson
Continued from yesterday. “He” is Gen. Alexander.

In Tunisia... Italian Field Marshal Messe orders the remaining German and Italian troops to surrender. About 250,000 Axis troops have been taken prisoner in the past few days.

In the Aleutian Islands... US forces now outnumber the Japanese defenders on Attu Island by 4 to 1. However, the Americans are unable to extend their front beyond the landing areas. Bad weather and the terrain hinder progress.

In Washington... The Trident Conference continues.

One of these B-17s was HELL’S ANGELS of the 303rd BG (H) which today completes it’s tour of 25 missions. The first B-17 crew to complete a tour intact. (Skip Guidry)

IRISH SEA: U-217 laid 15 mines in the St. Georges-Channel without any success. (Dave Shirlaw)

ITALY: Sardinia: After two weeks of constant bombardment from the air, Italian defenders here have been joined by German troops as this island braces itself for an Allied invasion. Few Axis leaders now doubt that Sardinia will be the target, and coastal defences are being rebuilt and the airfields repaired after the Allied raids.

The intensive bombardment is an essential part of an Allied deception plan which involved a the corpse of a mythical “Major William Martin” of the Royal Marines washed up in Spain last month carrying allegedly secret documents, giving details of the landings from North Africa. Hitlers Abwehr was taken in by the apparent authenticity; hence the reinforcements. Field Marshal Kesselring, the German commander in Italy, is known to be dubious, however, and has kept strong mobile forces in Sicily and Southern Italy which he regards as the more logical area for attack. It was Mussolini who called for reinforcements for Sardinia.

Despite its huge technical ability and industrial capacity. Italy is desperately short of raw materials and cannot supply its army adequately. This was revealed today by Crown Prince Umberto in an Infantry Day statement. He did not mention the strikes which have paralysed the industrial centres of Milan and Turin.

However, opposition to the Fascist regime is becoming increasingly vocal. An illegal “freedom” radio, Milano-Liberta, has called for Sicilians to revolt. “Chase the Fascists away and open the gates of your island to the democratic powers and freedom!” it said.

In Rome, the extremist Fascist newspaper Regime Fascista has unwittingly revealed the level of discontent in the country. The editor, Roberto Farinacci, Mussolini’s former second-in-command, has called for blackshirts to take to the streets and “terrorize people into obedience and to redouble their war effort.”

MEDITERRANEAN SEA: U-616 was attacked by escorts in the Mediterranean with 64 depth charges. The boat suffered severe damage and had to return to base. (Dave Shirlaw)

At 2.15pm today, the teleprinter chattered out a message for the British prime minister, who is in Washington. “Sir,” said the Allied C-in-C, General Alexander, “it is my duty to report that the Tunisian campaign is over. All enemy resistance has ceased. We are the masters of the North African shores.”
The German commander in North Africa, General von Arnim, surrendered yesterday, and the Italian General Messe, the Axis C-in-C, capitulated today. The end came quickly as Axis troops found themselves trapped between two Allied spearheads and began to give themselves up in their thousands. A small 11th Hussar squadron from Montgomery’s Eighth Army found itself with 10,000 exhausted men of the once formidable Afrika Korps. Then the deluge began as General von Vaerst, commanding the 5th Panzer Army, signalled: “We will fight to the last.” - only to watch his beaten troops raise their hands and march into captivity.

On a beach near Bizerta, another Hussar squadron found 9,000 disconsolate Germans awaiting rescue, some trying to build rafts. More Germans had escaped in commandeered small boats, only to be plucked out by the Royal Navy. Altogether, about 125,000 Germans are believed to be in the Allied “bag” - which including the Italians, could make as many as 250,000 prisoners.

For Hitler, who ordered a defence to “the last bullet”, the implications are serious. The defeated Afrika Korps would have been invaluable in the defence of Europe.

For the British, American and French, bitter lessons have been learnt. American generals and their troops have seen German armour in action and learnt how to cope with skilled defensive fighting. The French have learnt to co-operate with the British, despite the sinking of their fleet. And the British, celebrating in the bars of Tunis, have learnt that it is a long way from Alamein.

TERRITORY OF ALASKA: US forces on Attu in the Aleutian Islands outnumber the Japanese 4:1 but are holding. Bad weather and the terrain work in favour of the Japanese.
As U.S. losses continue to mount, the American front-line positions remain essentially the same as they were on D-Day. At 1100 hours, the 3d Battalion, 17th Infantry Regiment, part of the Southern Landing Force, attempts to take Jarmin Pass; Japanese fire from fog-shrouded heights stop the attack and kill two company commanders and wound two others. The Japanese attack the 1st Battalion, 17th Infantry Regiment, part of the Northern Landing Force, which has occupied the crest of Hill X but their attacks are driven off.

Bad weather keeps the air-ground liaison Consolidated B-24 Liberator from observing or hearing friendly ground forces on Attu and it returns to base. An air-ground support mission of six B-24s divert from Attu to Kiska; two of the bombers don’t get the message, proceed to Attu, and bomb Chichagof Harbor and Holtz Bay; the other four bomb the Main Camp area on Kiska. Eight Curtiss P-40s dispatched to Kiska in two waves cannot see the target and instead bomb installations on Little Kiska Island.

The Japanese dispatch 19 land-based torpedo aircraft from Kiska to attack the U.S. naval forces at Attu but they must turn back because of poor weather. (Jack McKillop)

U.S.A.: The motion picture “Bombardier” is released in the U.S. Directed by Richard Wallace, this propaganda war drama made for the home front stars Pat O’Brien, Randolph Scott, Anne Shirley, Eddie Albert, Robert Ryan and Barton MacLane. The film follows a group of USAAF bombardiers in training who go on to a battle in a ludicrous ending. It was nominated for Best Special Effects Academy Award. (Jack McKillop)

ATLANTIC OCEAN: The British have sunk three out of seven U-boats hunting convoy HX-237, which has lost three ships.

About 0930, U-176 attacked Convoy NC-18 and sank the Nickeliner and Mambi. The Mambi was hit by one torpedo and sank fast. Of 29 Cuban crewmembers and five American armed guards, only the master, nine crewmembers and one armed guard survived. A first torpedo in the port bow and a second hit the Nickeliner on the port side aft. The first explosion lifted the bow out of the water and threw water and flames about 100 feet into the air and the second released ammonia from the tanks. As the bow began to settle, the engines were secured and the eight officers, 15 crewmen, seven armed guards (the ship was armed with one 3in and two .30cal guns) and one passenger abandoned ship in two lifeboats 30 minutes after the hits. The tanker sank at 1015, while the survivors were picked up by a Cuban submarine chaser and landed at Nuevitas.

U-218 transferred injured crewmembers to U-461.

U-753 (Alfred Manhardt Von Mannstein CO) sunk at 48-37N 22-39W by HMCS Drumheller, HMS Lagan and RCAF 423 Sqn aircraft. A Sunderland from RCAF 423 Sqn sighted U-753 while flying in support of convoy HX-237. Making skilful use of cloud cover, F/Lt Musgrave approached to within a mile before being sighted by the U-boat, which opened a withering fire that drove off her attacker. The Sunderland orbited out of the U-boat’s AA range and called for support from the convoy escorts, only 10 miles away. As Lagan and Drumheller approached the U-boat dove, at which point the Sunderland made its attack. Two depth charges were seen to explode close to the ‘swirl’ and then the escorts made a series of follow-up attacks that produced oil and debris. Convoy HX-273 arrived in New York City on 17 May 43 with 45 ships. The convoy did lose 3 ships to U-boats, but theses were all ‘stragglers’ and no ships were lost from within the main body of the convoy. (Dave Shirlaw)

Thanks HJS for another fascinating roundup.

I loved the humorous detail about Germans gaining promotions just before they became POWs.

Gen Patton’s son-in-law mentioned on p7 as a POW. Something tells me Patton will try to rescue him.

Thanks. I missed that. 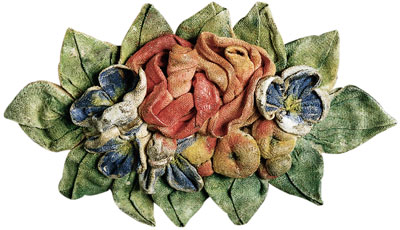 "This flower-shaped cloth brooch was handmade by a young girl from Warsaw who was incarcerated at the Bergen-Belsen, Germany, concentration camp.
Fellow inmate Sala Spett received the brooch as a present from her husband and children in May 1943.
The family members traded a slice of bread for the brooch, an act that meant a day's hunger." 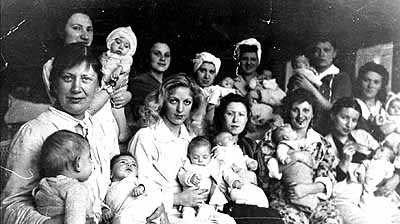 "These Jewish women and their babies were photographed in the Rothschild maternity hospital in Paris.
All but one of a group of 40, Fanny Kraus--who managed to escape with her child--were shipped to Auschwitz in May 1943.
They were among the nearly 50,000 Jews deported to Eastern Europe from France through June 1943.
Most of them died in the gas chambers of Auschwitz and Chelmno."