Another Washington dusk, another motorcade, another intimate evening played out in public view. On Oct. 3, just a day after their failed Olympics bid in Copenhagen, Barack and Michelle Obama slipped into a Georgetown restaurant for one of their now-familiar date nights: this time, to toast their 17th wedding anniversary. As with their previous outings, even the dark photographs taken by passers-by and posted on the Web looked glamorous: the president tieless, in a suit; the first lady in a backless sheath.

The Obama date-night tradition stretches back to the days when the president spent half his time in Springfield, Ill., reuniting at week’s close with his wife, who kept a regular Friday manicure and hair appointment for the occasion. But five days before he ventured out for his anniversary dinner, the president lamented what has happened to his nights out with his wife.

“I would say the one time during our stay here in the White House so far that has. . . .” He paused so long in choosing his words that Michelle Obama, sitting alongside him, prompted him. “Has what?”

“Annoyed me,” the president answered.

“Was when I took Michelle to New York and people made it into a political issue,” he continued, recalling the evening last spring when they flew to New York for dinner and a show, eliciting Republican gibes for spending federal money on their own entertainment.

81 posted on 10/30/2009 6:03:21 AM PDT by bray (Silent No More)
[ Post Reply | Private Reply | To 1 | View Replies]
To: Steelfish
Obama has it all wrong. This taxpayer loves forking over his hard-earned money at IRS gunpoint to allow the Holy O and Aunt Ester to take two million dollar dinner dates to Manhattan. I mean, he is THE ONE, right? Nothing but the best, nothing but the best--and not for anything he's done, but just for BEING.

He actually deserves better than the best. Just ask the other Holy O: Oprah.

Obama's marriage is charming and loving - and a great example to young parents.

My best guess on the ring is that it is a styized representation of an elephant hair bracelet worn by Chiefs of African clans in certain parts of africa.The tied pattern on the bracelets indicate rank in some African tribes.

You can see what I mean simply my image googling:

As to what it means? Well my guess also is that it is quite in keeping with Obamas closeted ( now) black power national
socialism, and the teachings of Rev. Wright.It is a powerful talisman from Obama;s “African” heritage, much the same as a ring of red celtic gold would be to an Irishman or Scot.

Its a beautiful ring, likely wrought of African gold, clearly made by hand crafting semi-molten gold on a smooth gold ring surface.

I wonder if Michelle has its opposite as a wedding ring, or whether this is Obama’s solitary personal statement.

It essentially confirms Obama’s black nationalism, and the importance he places on his own ideologiy of intergenerational historic justice inn respect to the alleged wrongs to Americas minorities ( thus the so called wealth redistribution health care bills).

Rings in homosexual circles have a specific meaning???

Are those two serpent symbols seperated by something at the top of the band?

Could be snakes .. or a symbol in some language.

87 posted on 10/30/2009 7:18:27 AM PDT by STARWISE (The Art & Science Institute of Chicago Politics NE Div: now open at the White House)
[ Post Reply | Private Reply | To 86 | View Replies]
To: Candor7
I wonder if Michelle has its opposite as a wedding ring, or whether this is Obama’s solitary personal statement.

"Michelle's was traditional, but Barack's was an intricate gold design from Indonesia, where he had lived as a boy.""

See Post #26 --- this is the quote, found in the referenced NYT article, that provoked my original curiosity. I wondered if he was using the ring he had worn on his wedding finger in his college days

BHO seems to switch off rings on his wedding finger See 2nd picture in post #45 -- that is definitely a different ring. 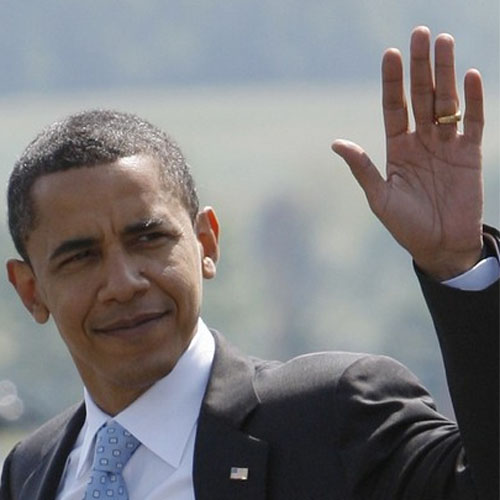 Is this the same ring? look at the raised section of gold; nothing in the snake ring appears raised to that degree, does it?

why does his head look photoshopped in the pic with michele? just looks weird. oh well.

NO! Let me reiterate. The ring is African in design patterned after elepahnat hair rings and bracelets.

It might have been made in Indonesia. But the design is distinctly African.

How much clearer can I be?

The fact that the ring design is African and Chiefly is significant. It is a statement of black power nationalism. Elephant hair bracelets have been worn my leftist black nationalists since the early 1960s.When they go to Kenya, it is a favorite purchase item of that crowd. I hope that you and others GET IT!( No more,"It can't happen here!"...IT IS HAPPENING HERE.)

Its not a matter of debate, its fact:

Carefully selected by the NYT, of course.

“I wonder if Michelle has its opposite as a wedding ring, or whether this is Obama’s solitary personal statement.”

You asked the above question? I answered by citing the quote from the referenced article, indicating that Michelle had a “traditional” ring.

I was in no way disputing your analysis and in fact was so impressed with it that I pinged FRED NERKS because I thought it might be of interest to him.

I was trying to track some of the people he would have been associated with and that are “thought” to have actually written that book of his...I read that he returned to Chicago and the book was actually finished in 1995. What is really interesting (and frightening) are the connections between the people we know he associated with and the ones those people associated with...if anyone has any doubt that our country has been taken over by a bunch of Marxists, they really need to wake up. If we don’t clean out Washington, our Republic will be lost to Communisim...the change is already in the process of development.

97 posted on 10/30/2009 9:35:12 AM PDT by imfrmdixie
[ Post Reply | Private Reply | To 41 | View Replies]
To: thouworm
I suppose you forgot about your original question about Michelle's ring...noted and answered in my reply by the direct quote from the NYT article----else, why the following comments?

NO! Let me reiterate. How much clearer can I be? Just GET IT.LOL. Sheesh! Don't be lazy.

I have to check dates: I just read that he finished the book the year before he ran for the Illinois Senate.

Agree & worse: BHO’s assignment could be described as: destroy the country internally & hand over all possible to “transnational” interests.

You are correct; first publishing date for “Dreams” is 1995, and that is used in this NYT article.

See my post here for what I have on history of the book deals. He got the first deal with $100,000 advance after he was contacted by publisher after he was appointed to Harvard Law Review. He could not finish book; had to pay an undisclosed sum back to publisher. His agent (Jane Dystel) got him another book deal with an advance of $40,000.