Your intention and your statement match up perfectly. This woman thanks you for referring to her as Gov. Palin.

It’s always bothered me when news pundits and Democrats referred to Dr. Rice or Secretary of State Rice as “Condi”. Give the woman the respect she deserves for her accomplishments.

Ok, I’ll get off my soapbox.

But seriously, I believe Gov. Palin’s ability to be who she is is really resonating with the American people. And showing liberals to be the frauds that they are.

Absolutely! Put me down for a tube of Palin Pink and Redstate Red

25 posted on 09/16/2008 6:51:32 AM PDT by JFC (The libs fear us Republicans.. wait until JUDGEMENT DAY!!)
[ Post Reply | Private Reply | To 20 | View Replies]
To: Jackson57
For me, one of her most amazing qualities is that you instantly want to be her friend and get to know her. I don't feel that way about most people I "meet" for the first time, but I do about her. Other people I know feel the same way...an instant friendship. It is not a feeling based on sex, either, as both my male and female friends feel the same. I can't really describe it, but others have also sensed it.
26 posted on 09/16/2008 6:55:16 AM PDT by econjack (Some people are as dumb as soup.)
[ Post Reply | Private Reply | To 17 | View Replies]
To: redstates4ever
Excellent photos! Thanks!

I get to see her on Friday! WOO HOO!

And talk about HOPE (ok, I stole that from Obama). She’s the absolute role model for the young girls of our country. She’s come from a working class family. Went to a state college. Met and married a wonderful man. Worked along side of him for their financial welfare. Has a loving family, who she’s willing to support regardless of their mistakes. Saw a problem in their community and got involved to fix it. Stayed true to her convictions. Is now being recognized for all of that by being given the opportunity to serve her country in the second highest office (her words).

Isn’t THAT what we all want for our daughters?

My fave as well.

They are Pro-choice on makeup ;-)

Thank you for referring to her as Governor Palin. :o) 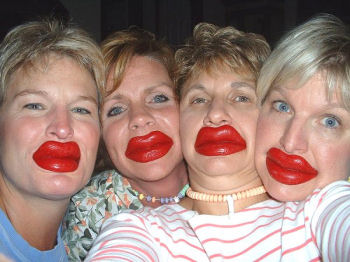 I think it might be a goof on “parasailing.”

And while I’m on soapbox, I honestly think part of her popularity coming from men isn’t ONLY because she’s attractive. I truly (speaking for myself) believe she’s resonating with men too because she’s a female leader we can support because she doesn’t make us feel bad for being men. She’s got qualities we can connect with that are common to ours while still being a full blown woman. She’s strong, tough, competent, smart, funny, charming AND A WOMAN. She doesn’t tell us there is something wrong with us for being who we are, too.

I hope I can say this in the right way ... but gender is an issue her ... for all of the RIGHT reasons. Gov. Palin is showing the country that gender can still be part of who we are, but it doesn’t have to divide us. It shows us that men and women can be different but have common values. Unlike the Obama campaign who is showing us that race is STILL a divisive issue because they’re making it so.

“My 14 and 11 year old daughters are waiting by the door for a delivery of Lipstick/Palin t-shirts that I ordered for them from on line.”

My daughters wanted to skip school in order to attend this rally!

We also have t-shirts on order!

That’s awesome! Did you make that?

My tagline is doubly applicable here.....

I can explain the back of that t-shirt. That’s my wife’s shirt. She wanted a customized t-shirt for the event but while making it (with one arm as she just has had a full shoulder replacement - note the sling) some of the letters fell off. I hurriedly (because of the late hour) picked up the letters and ironed them back on but had mixed up the letters. Thus, it was my fault for doing it and my fault for not noticing it. Mea culpa. Mea maxima culpa.