YONAGUNI, OKINAWA PREF. - A team of Japanese and Taiwanese paddlers in a dugout canoe on Tuesday successfully replicated a hypothetical human migration between Taiwan and Okinawa about 30,000 years ago.

During the two-day, 200-kilometer voyage from Taitung County, southeastern Taiwan, to Yonaguni Island, Okinawa Prefecture, the team of five paddlers — one Taiwanese, three Japanese men and one Japanese woman — relied solely on the stars, sun and wind for their bearings.

They departed Taiwan on Sunday afternoon in their 7.6-meter-long, 70-centimeter-wide wooden canoe, crossing the Black Stream, which begins off the Philippines and flows northeastward past Japan.

According to Yosuke Kaifu, 50, leader of the team who accompanied the canoe aboard an escort ship, Japanese archaeologists have found that early humans migrated to Japan via three routes, and one of them is along the course of the Black Stream. However, it is unknown how they actually traveled to the Japanese islands.

The project involving the two museums was intended to shed light on how difficult the journey would have been, Kaifu said.

“I was worried when (they) temporarily went off course, but am glad to see them arrive,” Kaifu said after the paddlers reached Yonaguni.

“It was a perfect voyage,” said Koji Hara, a 47-year-old lead paddler. “The Black Stream carried the canoe and all we did was steer it a little.” The five were tired, but did not have any health issues.

As the boat reached the island, it was welcomed by several hundred cheering local residents.

“They have all returned safely. I want to say ‘thank you’ to them,” said Mitsuko Maeso, a 71-old housewife living on Yonaguni.

“I can’t imagine how people traveled 30,000 years ago, but for this journey I think they risked their lives,” she said.

The discovery of relics dating back more than 30,000 years on several islands of the Ryukyu Archipelago made archaeologists speculate that a group of ancient settlers migrated to Japan from what is now Taiwan in the Paleolithic era, which extends from some 2.6 million years ago to around 15,000 years ago.

Kaifu has said that even if the project is successful, he would not jump to the conclusion that some ancestors of the Japanese people came from Taiwan, but at least it would show the possibility is quite high.

The other two routes for early human migration to Japan are from the Korean Peninsula across the Tsushima Strait about 38,000 years ago and from Eurasia across the Tsugaru Strait that separates the main islands of Honshu and Hokkaido.

Before Kaifu persuaded the two museums to fund the project, he initiated a similar project in 2016 when two primitive canoes made from local straw departed from Yonaguni Island bound for Taiwan. They only managed to reach the neighboring island of Iriomote, about 75 km away.

The 2017 voyage, on a boat made of bamboo and rattan grown in Taiwan, made it from Dawu Township, Taitung County, to Green Island, which is about 66 km away.

The 2018 boat was also made of bamboo and rattan, but it was smaller and carried fewer people. It did not last long on the open sea. 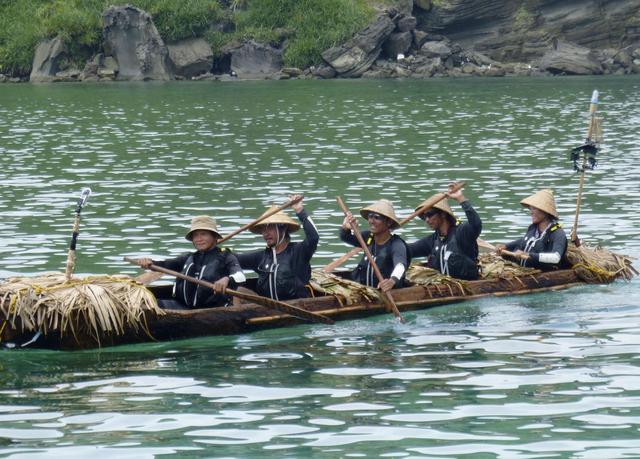 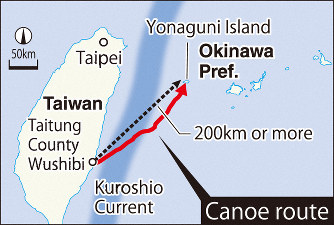 Of course, the REAL settlers didn't know that Okinawa even existed, much less where it was located.

Island migrations were guided by birds.
They didn’t the islands were there, but they knew they were because of birds.

30,000 years ago would have been near the coldest point of the last Ice Age.

Sea level would have been much lower, and, possibly, intermediate islands would have appeared between Taiwan and Okinawa.

During that period, it would not surprise me if people could have almost walked, or at least floated, from Korea and Sakhalin to Japan.

However, the oldest human bones ever found in Japan are only about 15,000 years old, so maybe this entire effort was just a recreational fantasy.

Unless some ancient aliens gave them paper maps.

I want to know how Hawaii got settled. The Polynesians couldn't have island hopped to get there. Whoever did get there by accident wouldn't have known how to get back home to pick up some women; and then try to get back. Survival along the way would be a big issue.

I wish someone would figure out how these people got into those tiny canoes and just rowed out with no idea what was there or how the hell they got back.

We just accept the story at face value like it was perfectly normal.

I like these type of replication projects. Last night I was watching a show called The Strongest Man in History. Four of the strongest men were replicating the feats of strength from the Vikings that occurred over 1,000 years ago.

Been to Okinawa. Why go there?

Rather impossible to replicate an “ imagined/hypothetical “ sea migration. Now if it actually happened, then it can be replicated.

My dad was wondering the same thing when a Kamikaze flew bare feet over his head to impact on the top of the #3 turret of the Maryland...

I think man floated long before we think they could float, But how did they follow the route of the vessel and know it got off track without onboard GPS?