The people of Liechtenstein have voted to make their prince an absolute monarch again.

Correspondents say there was a bitter campaign leading up to the vote. 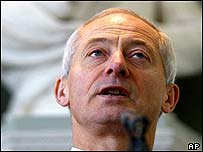 Hans-Adam even threatened to quit the country his family have ruled for 300 years if he did not like the outcome.

But that appeared forgotten once the first votes were counted.

"It's an excellent result. We can be very pleased with it," the prince told local radio.

Hans-Adam - Crown Prince of Liechtenstein since 1989 - already had the right to dissolve parliament and call elections.

But he wanted the power to hire and fire governments for the 160-square-kilometre (62-square-mile) country - the sixth smallest in the world.

The prince's supporters claimed he simply wanted to iron out ambiguities in the constitution. But critics, like Sigvard Wolhwend of the Democratic Secretariat Party, warned that granting the prince more power could turn Liechtenstein into a dictatorship.

"He has more than enough power and it's not democratic to have the head of the state who is uncontrollable and has the power to dismiss parliament and government whenever he feels like it. I think that's the real, real bad thing."

The BBC's Emma Jane Kirby in the capital, Vaduz, says the people of Liechtenstein faced a difficult dilemma.

Although many citizens oppose an absolute monarchy, they are also very attached to the royal family, she says.

As such, they decided to grant Hans-Adam his wish rather than wait to find out if he would carry out his threat to leave Vaduz castle and move to his alternative residence in Austria.

TOPICS: Culture/Society; Foreign Affairs; Front Page News; Government; Philosophy; Politics/Elections
KEYWORDS: absolutemonarchy; hansadamii; liechtenstein
Turnout was 87.7%
1 posted on 03/17/2003 3:39:24 AM PST by Int
[ Post Reply | Private Reply | View Replies]
To: Int; MadIvan
Didn't earlier stories say that the people of Liechtenstein retain the right to abolish the monarchy through referendum? So I would think the prince is still not quite an absolute monarch.
2 posted on 03/17/2003 3:42:53 AM PST by aristeides
[ Post Reply | Private Reply | To 1 | View Replies]
Comment #3 Removed by Moderator

I love that tagline. I was thinking the same thing reading Sneakypete's "opus" lastnight.

- A counterproposal to diminish the prince's powers and leave him with a mere symbolic status won 17 percent of votes (failed).

- "Under the new constitution, the prince wins the right to veto bills, fire the government and adopt emergency laws. But the constitution also gives the people the option of calling a referendum to abolish the monarchy."
If 1,500 people sign an initiative they can force a Liechtenstein-wide referendum. So technically you're right... if the Prince gets too autocratic he could indeed be constitutionaly ousted. But it's an interesting balance.

6 posted on 03/17/2003 4:06:03 AM PST by Int (Ever notice how the Freepers that have been here longest are the most 'moderate'?)
[ Post Reply | Private Reply | To 2 | View Replies]
To: Int; aristeides; Calcetines
Remember The Mouse That Roared, with Peter Sellars? If Lichtenstein has any economic problems, the Prince should declare war on the USA (as Sellars, the prince of "Ruritania" did in the movie), lose the war the next day, and then be showered with American aid.
7 posted on 03/17/2003 4:07:11 AM PST by ricpic
[ Post Reply | Private Reply | To 1 | View Replies]
Comment #8 Removed by Moderator
Comment #9 Removed by Moderator

To: TomB
"Ever notice how the Freepers that have been here longest are the most 'moderate'?"

To: Calcetines
I think the parking lot at Disney is bigger than Lichtenstein.

Andorra even repelled a Nazi invasion in 1940. Four German soldiers drove into the capital city and took over the main hotel. Partied too hard, drank too much, and woke up in jail! The Andorrans then turned them over to some German officer at the border.

Wasn't it the Duchy of Grand Fenwick?

Nah, it's just that the dead wood is culled out.

As one poster put it on the "opus" thread last night, some people get a vastly overblown view of their own importance around here. And when it is pointed out to them that their views hold no greater weight than others who haven't been around as long, they have a snit, take their ball and go home.

I can honestly say I've never missed one of the banned posters (other than to laugh at them).