Mustn't gloat, mustn't gloat. Instead, we must try and look sober and reflective (think Winona as the verdict's read out) and then step smartly to the side and let the Democrats tear themselves apart.

I'm reluctant to intrude on family grief, especially as the Dems are doing such a sterling job all by themselves. But, when big shot Democrats look at Tusday's results and instantly announce the reason they flopped out was because they weren't left-wing enough, I'm inclined to think I've died and gone to Republican heaven. Hey, you liberals: We right-wing guys are supposed to be the Stupid Party, remember?

So, when Democrat chums tell me they'd have done better if they'd openly opposed the war and called for repeal of the tax cut, I try to nod in agreement without openly guffawing and spraying the decaf hazelnut latte all over their shirt fronts. "Oh, absolutely," I say. "If only you'd been more anti-war and pro-tax, those New Hampshire, North Carolina and Texas Senate seats would now be yours."

As to whom Democrats should turn to for a top-notch presidential candidate with a fresh face, I say you can't do better than Jim Jeffords, the celebrated Vermont Dairy Queen with the soft-serve principles. Alas even after Tuesday, we conservatives are unlikely to get that lucky. So, on the basis that there are Democrats genuinely interested in addressing what went wrong this week, here is one big thought, from the words of your own William Jefferson Clinton: It's time to move on.

By "moving on," I'm thinking of fellows like Al Gore. You can pretty much correlate the Democrats' worst results on Tuesday with Al's travel schedule during the campaign. Also Bill Clinton's, come to that. The polls had Bill McBride holding his own against Florida Gov. Jeb Bush until Bill and Al showed up to lend a hand. The same in Maryland, where Kathleen Kennedy Townsend was still the favorite until Al and Bill breezed into town to stump for her. And everywhere Al went he had a consistent message: This election isn't about the war or the economy, it's about me and "the disputed Florida vote two years ago." "Are you over it?" he roared at the crowds. "No!" they roared back.

Earth to Al: The rest of us are over it.

This is the Democrats' real defect. "Don't Stop Thinking About Tomorrow," sang Fleetwood Mac in Bill Clinto's '92 campaign. Ten years on, the Dems can't stop thinking about yesterday. For Al Gore, it's always Florida 2000 and his chads are dangling. For the National Organization for Women, it's always 1973 and Roe vs. Wade. For Jesse Jackson, it's always 1963 and Selma, Alabam'. Come election time, the Democrats sound like an oldies station with only three records.

Even in crude terms of "shoring up their base," the Dems feel clapped out: When Harry Belafonte has nothing to say about America's secretary of state and national security adviser other than that massa's been roun' the cottonfields and picked out a couple new house slaves, he's cranking out a tired refrain even older that his last hit. When elderly feminists run around warning "women" that their right to an abortion is a stake in this election, it's not just that it's untrue, it's that it's so lame and frankly sounds just plain loopy when North Korea has nukes and there's a Homeland Security bill ot pass. The National Organization for Women endorsed 18 candidates in this election: 15 lost.

We live in iteresting times, as the old Chinese curse has it, and the Dems have nothing interesting to say. In the midst of a great historical drama, they're still doing vaudevillian knockabout. On all the important issues, the Dems were profoundly unserious. And their complaint that the president's selfish obsession with national security, foreign policy and other trivialities was crowding out "the real issues" is a good example: Whatever the merits or otherwise of a "prescription drug plan for seniors," a great national party has to be more than a pharmacist-in-chief. The obsession with pill dispensing sounded weird in 2000, and just plain inadequate now. Late in the eveing, as the band at Missouri campaign HQ attempted to rouse the despondent crowd with Steve Allen's great song "This could Be the Start of Something Big," you couldn't help feeling that the Dems face the opposite problem: This could be the end of something small.

Whether the Democrats and their media cheerleaders understand this is doubtful. On the front page of Wednesday's New York Times, veteran Times bore R.W. ("Johnny") Apple Jr. turned in a masterpiece of patrician ennui in which the unprecendednted Republican achievements, from New Hampshire to Hawaii, were passed off as "lifeless" and "cheerless" and evidence of the public's "disenchantment and curious disconnection from the political system." I'd say they were evidence of the Times' discenchantment and curious disconnection from reality: Apple's "analysis" was almost as hilarious as his predictions of an almost Vietnam-style quagmire in Afghanistan a week before Kabul fell. But surely even a New York Times grandee should be able to make a reasonable stab at getting something right after it's happened.

As for the comforting talk of a nation still divided 50/50, UPI's Steve Sailer points out the nationwide spresd in the House races: Republicans 53.4 percent, Democrats 46.6 percent. That 6.8 percent edge could do a lot of damage. Sailer didn't factor in third-party votes, which also make for interesting reading: The Dems' net gain in the gubernatorial races was due to four states -- Alabama, Oklahoma, Oregon, Wisconsin -- where anti-tax Libertarian candidates siphoned off enough votes from the GOP to deliver the state to the Democrat. When a Dem runs on an explicit high-tax platform -- as the gubernatorial candidate did in New Hampshire, with her proposal to introduce an income tax -- voters abandon the Libertarians and come home to the Republicans. The proportion of voters philosophically antithetic to, say, a Nancy Pelosi Democratic Party is a notch or two higher than 53.4.

Meanwhile, the good news is there's a new star on the Democratic team: Jennifer Granholm, the telegenic new governor of Michigan. The bad news is she was born in British Columbia and thus ineligible to run for president. 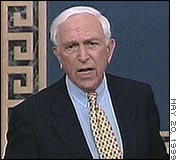 The Democratic Party:
Building A Bridge To The Twentieth Century.

As to whom Democrats should turn to for a top-notch presidential candidate with a fresh face, I say you can't do better than Jim Jeffords, the celebrated Vermont Dairy Queen with the soft-serve principles.

11 posted on 11/10/2002 1:17:47 PM PST by MainFrame65
[ Post Reply | Private Reply | To 1 | View Replies]
To: fatguy
The problem with the Dems and the reason they lost this election is that they believe their own propaganda, a serious mistake in the real world.

The mainstream (liberal) press reports the propaganda, the distorted polls and the spin that the Dems put out, the Dems crank that into their assessments and, SHAZAM! defeat at the polls.

Let's hope they keep little Tommy and Terry right where they are!

Actually I've been thinking it's more like watching a bonefire on a cold night.....the flames keep you warm while you roast your weinies and drink your beer.

We could always do a "Save the beached whales" campaign to get the Dem's to keep these idiots in charge.

That is the strangest thing. The lemmings are saying that they didn't send their message, and it should have been strongly progressive. So a far-left wing millionaire Dem woman (father and brother both corrupt past mayors of Baltimore) is being promoted to be Minority Speaker of the House. You don't need to pass a knife to these idiots, they've got their own already poised at their throats.

Al Gore: Raiding a Fridge in the twenty-first century

19 posted on 11/10/2002 2:03:30 PM PST by Paul Atreides
[ Post Reply | Private Reply | To 7 | View Replies]
To: lancer
And the fascinating thing about the Democrat equivalent of the Flat Earth Society is that only one of its failed leaders, Dick Gephardt in the House, even has the common sense to get out of the way. And that's to "prepare for a run for President." I take that back about Gephardt's common sense.

As for Tom ("Got a phone book to sit on?") Daschle and Terry ("I can get away with ANYTHING") McAuliffe, both intend to stay right where they are. As I said of Li'l Tommy Daschle in my latest column, "He intends to lead the Democrats in defeat, just as he led them into defeat." Turns out the same applies to Terry.

Seems like the national leader of the Democrats really ought to be Jubilation T. Cornpone (from "Li'l Abner") who led his troops into defeat. Or bring back Casey Stengel, not from the Yankees, but from the Mets. Or Jim Jones from Jonestown -- ladle out the Kool-Aid, me hearties. Or "Wrong-Way" Corrigan. Or all of them together.

This Just In: Bush Defeats Clinton