In the Vehicles section we have had the privilege to glory in many amazing new and vintage automobiles.

But what about the duds?

What about the cars that never should have been made? The ones that, no matter how prescient their creators thought they were when they conceived these cars, were clearly either aesthetically ghastly, deeply mechanically flawed, or both?

That list could be quite long. Don't forget, there were thousands of car companies in the first half of the last century, many of which died because they cranked out substandard machines; the rest croaked either from the dire economic times in the Depression or shortly after the war, when the likes of General Motors made it impossible to compete.

But we prefer to focus on the duds we know and love to hate. That'd be the classic bombs of the post-war years, cars that had no business rolling down the highway--ever--and yet some of which became big sellers despite having hideous designs, awful engineering, wretched build quality, and sometimes all three.

By the way, we are aware that some of the cars on this list weren't the last of their kind, but they are here to remind us of just how bad it got, how wrong car design and production could be.

And we also know that this list is far from complete. So you should vote in the adjacent pole to add your two cents to our dud car list.

Finally, we are well aware that some readers will be terribly put off because they drove their high school sweetheart to prom in one of these dread creations (or they've got the same car up on blocks in the garage right now, just waiting for another paycheck to afford more fiberglass bodywork and another set of chrome wheels). But where's the fun if we don't offend? Remember, one man's trash is another man's treasure (hence the wonder of capitalism). 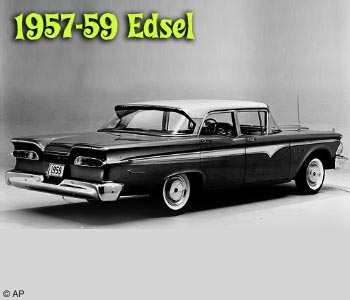 The Edsel was the ultimate DOA car, but contrary to common opinion, this was more a function of market segmenting and changing tastes than of purely bad styling. And of course it doesn't help that it was ugly. The vertical front grille of the Edsel looked like a big nose that divided the otherwise relatively conventional front of the car, and the front and back styling made even the 350hp V-8 version look slow. By the time Ford decided to restyle the Edsel in 1959, the car's sales had slid off a cliff and that was the end of Edsel. 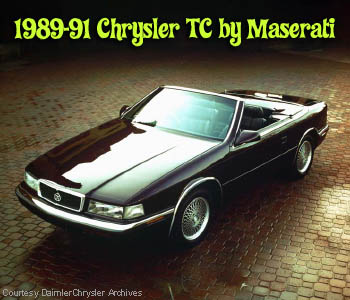 There were a whopping 52 service bulletins (many requiring recalls) for this bastard-child car born of an unfortunate need by Maserati for ready cash and Chrysler's willingness to turn a LeBaron into a Maserati. Not only was a 3.0-liter V-6 a criminal concept for a supposed Italian exotic (putting out a pathetic 141 horsepower), but so was the American sheetmetal. Then there were the many mechanical nightmares from blown clutches and engines to leaking roofs. This car cost double the sticker on the LeBaron and broke twice as often. After all, it was Italian, right? 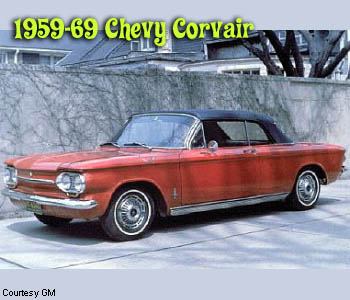 Sure, the nifty-looking Corvair had some good points. Like a Porsche 911, its engine was air-cooled, and resided in the back, to provide extra rear-wheel traction. Too bad its flat-six engine biased the weight of the early cars so far aftward that the steering became very light at highway speeds; and it sure didn't help that the gas tank was mounted up front, so if you did wreck--Ka Boom! If only the design had been better executed. Bummer. (Watch out, here come the nasty letters from all those Corvair fans!) 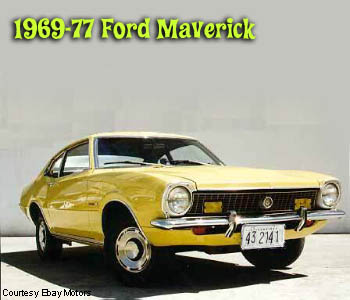 There were four-door Mavericks and two-doors. There was a Mercury version called the Comet. There were vinyl-topped models, too. What they had in common was that they were built on platform designs heavily prone to rust (this was the early days of unit-body cars) and weak-kneed in-line six engines. But the cars were cheap and therefore, popular, especially in the gas-crisis years. Not that we think the Maverick is necessarily as bad as what came afterward--the abysmal Fox-platform Futura/Fairmont, and the Grenada, which was still based on the Maverick platform, and so carried forward all the bad-handling traits and massive rustability to boot. 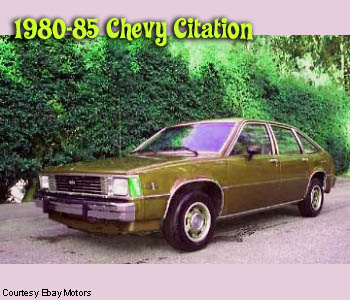 With a 2.8-liter V-6 and front-wheel drive, this was GM's attempt to take on the likes of Honda and Toyota. GM also shared this so-called X-body setup (of the Citation) with Olds (Omega) Buick (Skylark) and Pontiac (Phoenix). The differences were basically in body style, not fundamental mechanics. Naturally, because the cars looked futuristic and because they got decent mileage, the Citation and its brethren were a huge hit (800,000 Citations sold in 1980). But to meet demand GM let quality slip, so problems like faulty brakes and steering plagued Citations and led to a steep drop in quality--and sales. 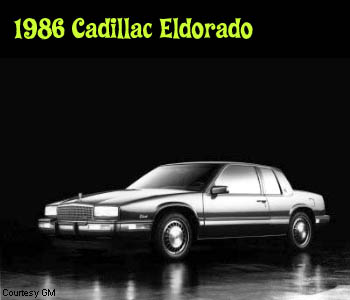 In a desperate attempt to reach a younger demographic, Cadillac revamped its classic Eldorado to look less like a classic Caddy road yacht and more like a two-door version of the ill-conceived four-door Cadillac Cimarron. Demand for the new Caddy fell (big surprise), and only a year after introduction production sank to just under 18,000 units. Did it matter that you could get a V-8 in the Caddy and not in the other GM look-alikes? Nope. It took another 16 years of awful versions (2002 will be the last year of the Eldo) but the decline all started back in 1986. 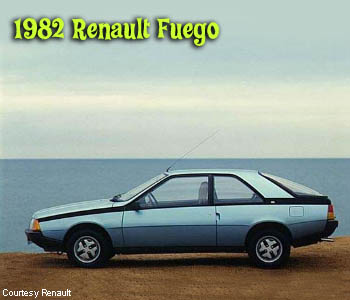 In the early 1980s American Motors Corporation (before it was absorbed by Chrysler) and French-maker Renault teamed up to make some really awful cars but none as bad as the Fuego. Thankfully, the relationship died out--and today AMC no longer exists and Renault hasn't set foot on American shores since. The Fuego's screamed "car of the future" but it was more like a bad omen. It came in a sporty turbo edition and even handled decently. But its odd appearance and legendarily short-prone electrical system (and no-go engine) soon had customers saying "au revoir." 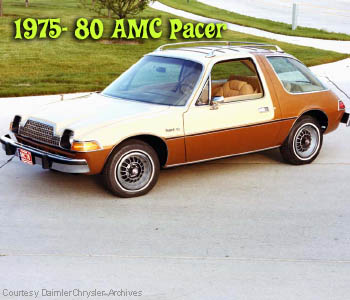 Hands down probably one of the ugliest, if not the ugliest, car car ever made. When the car went into production it was discovered that the rotary motor had serious quality issues, so at the last second AMC had to switch to an in-line six, which also required widening the car and scrapping the front-wheel drive setup. The width helped: Handling was fairly impressive and huge doors made the car practical. The car sold well, but after the first year it became apparent that the car was too heavy, too goofy, and far too unreliable. Did we mention its looks? 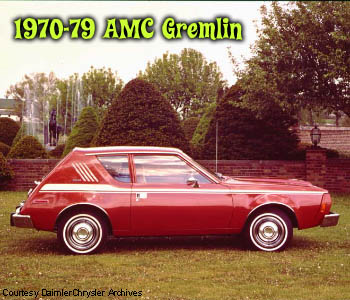 Were the designers at AMC blind? How could they consistently turn out so many hideous cars? While the Gremlin enjoyed the distinction of being the first U.S.-made subcompact, its V-8, which was introduced right when the oil-crunch hit, hurt it. People wanted little four-cylinder models, not cars that were funny looking, small and oddly powerful. It also didn't help that initially it came only as a coupe. Later, AMC would later add a four-door but the problem was really with the looks. It didn't matter that the Gremlin was more reliable and sportier (in many guises) than the equally lame Ford Pinto--it was just uglier. 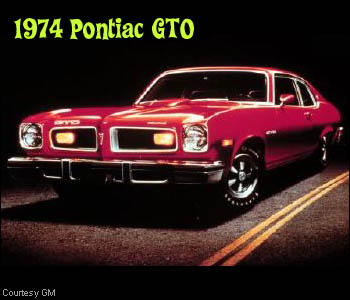 We're not knocking all GTOs by any means. The GTOs from the 1960s were great but by the time pollution and fuel-consumption standards had been put in effect in the early 1970s GM didn't have an answer. Its huge but inefficient V-8s were no match for all the smog-limiting hosiery that had to be attached; power and performance both dropped, but mileage didn't go up. Then in 1972 the GTO became an option--not even a model--of the Pontiac LeMans. By 1974 it was just a badge-job Chevy Nova, a disguise nobody bought (literally or figuratively) and the GTO finally bit the dust that year. 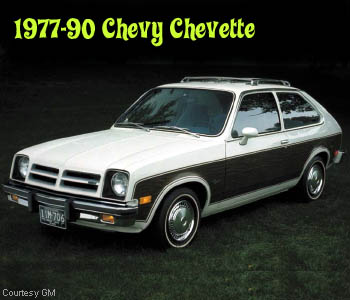 The best thing you could say about this car is that at least they got the scale right. It was meant as an answer to Honda and Toyota's fuel-sippers, and it was a small four-seater. But besides getting good mpg the Chevette was a really badly made, poorly assembled car. Rust, major mechanical failures, leaks--it had it all. It was also no fun to drive (unlike those Japanese cars like the early Accords) and gutless. Some people thought Chevettes were cute, though. Who could resist one with glued-on faux wood panels like this one? 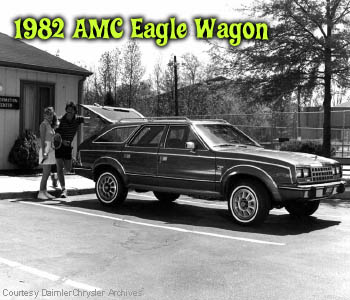 If only. If only the Eagle Wagon weren't such a dog. If only Chrysler had changed the body styling in the late 1980s and made it a Jeep, not an Eagle. See, the Eagle was the original Outback off-road wagon, but came out a decade and a half before Subaru thought of the notion. Sadly, the Eagle had an old, inefficient six-cylinder motor (only capable of 110hp), a body borrowed from old AMC Hornets, and a clunky, three-speed automatic licensed from Chrysler. Talk about missed opportunities. 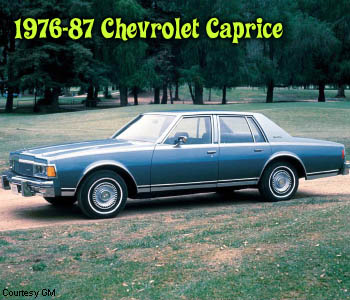 The Chevrolet Caprice got a new, fuel-efficient 250-cubic-inch engine and earned an EPA rating of 22 mpg on the highway. That was pretty impressive, but the beasts wallowed in corners and required great attention to go straight at speed. Later Caprices got V-8 engines and were restyled to become Caprice Classics in the later '80s. But even these faster cars understeered in the extreme and sent every road dent and pothole reverberating from the suspension straight to your clenched-in-anticipation jaw. The fact that they were also one of the most boring-looking cars ever designed didn't help either.

No, the best thing you could say about this car is that it was capable of turning multiple 360s on light ice. A short wheelbase and rear-wheel drive transmission meant that you could spin to your heart's content. Until you flipped. :-)

Hey honey, lets go camping in the back of the car!

Some European cars were so good I still wish they made them today. The BMW 2002 comes to mind. With a few minor improvements they could make this today and it would still be one of the best cars on the road.

The Pontiac Aztec is THE biggest flop.

I'd have to go with Pacer by a nose.

AMC never did better than the Javelin, which was also a piece of crap.

LOL. Phew, that is funny.