AMERICAN forces may have breached human rights and then removed evidence after the so-called wedding party airstrike that killed more than 50 Afghan civilians this month, according to a draft United Nations report seen by The Times.

A preliminary UN investigation has found no corroboration of American claims that its aircraft were fired on from the ground, and says there were discrepancies in US accounts of what happened.

If the findings are upheld by a second, more detailed, UN investigation, they will cause huge embarrassment to the Pentagon.

UN sources said that the findings pointed to an American cover-up, and suggested that American investigators were dragging their feet hoping that the issue would pass.

The attack took place early on July 1 as American forces hunted pockets of Taleban and al-Qaeda resistance. A US helicopter gunship opened fire on targets around the village of Kakarak, and the casualties included 25 members of one family at a wedding party.

A UN source said that the report was produced by a team of “experienced and reputable UN people, who have been in the region a while and know it well”. It states that there was clear evidence that human rights violations had taken place and that coalition forces had arrived on the scene very quickly after the airstrikes and “cleaned the area”, removing evidence of “shrapnel, bullets and traces of blood”. Women on the scene had their hands tied behind their backs.

Investigators had found no weapons, “no corroboration” on the ground that the US had been fired on, and that there were discrepancies between the various American accounts of what happened.

In a prepared statement last night a UN spokesman in Afghanistan said that the report contained judgments that were not sufficiently substantiated, and that a comprehensive report was being finalised that would provide a more detailed and accurate picture.

However, the statement added that “the findings on the ground bear out the paramount necessity that such incidents do not recur, both from a humanitarian and political perspective”.

It called for “an in-depth investigation (to) be carried out to ensure that such tragedies are not repeated; and that the protection of civilian lives becomes a primary concern in the fight against terrorism in Afghanistan”.

The wedding party raid was not the first US airstrike to kill Afghan civilians and it both angered President Karzai and has fuelled anti-American sentiment in the country.

A joint US-Afghan team is investigating the strike, but nothing has been disclosed and no timescale has been given on when the findings will be made public. One UN official put it: “The more it drags on, the harder it is to prove and probably the people investigating want it to go slowly and die away.”

Pentagon officials have said that cameras fixed to the AC130’s gun turrets showed gunfire coming from the ground, but the Pentagon has not released the film, as it has on previous occasions, preventing independent analysis of whether it was anti-aircraft artillery or celebratory rifle fire.

The Pentagon declined to comment on the UN report, but said all matters arising from the incident were under consideration by US Central Command and that charges against the servicemen involved had not been ruled out.

But the Pentagon insisted it was too early for the US to draw any conclusions because its investigative team had yet to start compiling its report.

3 posted on 07/28/2002 5:29:00 PM PDT by FourPeas
[ Post Reply | Private Reply | To 1 | View Replies]
To: Diddle E. Squat
preliminary UN investigation has found no corroboration of American claims that its aircraft were fired on from the ground

Where would they go for "corroboration"? Let's get out of the UN, and let's remember never again to protect the bums in Europe...

I think it was only for a month, and it may have been June or it might be for this month. Not sure.

Yes! And then the UN building. Then bulldoze it. Then cover it up!!

"Reputable UN people" is an oxymoron. 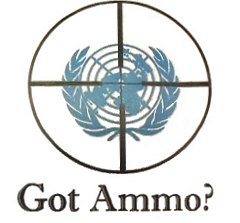