It was fun while it lasted. And then the cancer overwhelmed it. Bye.

Keep the BCS, BCS bowls, and all the other bowls, but modify it into a 10-team playoff, with just 4 games after the New Year's bowls. Right now 10 teams go to 5 bowl games based out of the 4 BCS bowls (with the bogus mythical nat'l champ game being a 2nd game for one of the BCS bowls on a rotating basis.) There is talk of going to a +1 playoff format, where the top 2 BCS bowl winners meet in a nat'l champ game. But that would likely require either going back to 8 BCS teams (very unlikely for political reasons) or adding a 5th BCS bowl. Doing the latter wouldn't hurt the BCS revenues one iota, the original 4 BCS bowls could still keep to themselves the final champ game on a rotating basis and the new 5th BCS bowl could have a separately negotiated TV contract if they were worried about it diluting their existing TV contract. Would make sense to take in 1 new bowl and make it the home of the Big East champ (the ACC has the Orange, the SEC the Sugar, the Big 12 the Fiesta, and the Pac 10 and Big 10 (sic) the Rose.) By adding a 5th bowl and going to a playoff, the Rose Bowl gets a guarantee that they won't have to substitute a wildcard if one or both of their conferences' champs are ranked #1 or #2 (a big sore spot for the Rose that has threatened to split the BCS in the past.) The 4 wildcards could either be distributed by ranking (most fair) or bowl selection (as is done now, might be a concession to the BCS bowls to get a playoff.)

Round One: Play 5 BCS Bowls over New Year's, just as they do now.

Round Two: At least a full week after the BCS bowls, give the highest-ranked three winners a bye, and have #4 host #5 in an on-campus home game.

Round Four: The actual national championship game is played in a BCS bowl, rotated among the original 4 BCS bowls, just as it is now.

With 10 BCS teams you get 6 conference champs and 4 wildcards, guaranteeing that even in the worst case the top 4 teams will get into the playoff, and most likely the top 7 or 8 teams, or even all 10 if there are no upsets. It is extremely likely that the actual best team in the country will be in the top 8 BCS rankings at the end of the year, as opposed to many years where the actual best team doesn't make the BCS top 2 or the #1-ranked team loses their bowl (which by nature suggests that the polls were wrong and thus may have been wrong about who the actual top 2 teams were.)

In this format no school hosts more than 1 playoff game. The existing BCS bowls (and all the other bowls) keep as many games as they have now. There is no watering down of the BCS bowls, but rather a strengthening, since all of them now matter. With no more than 2 games per weekend after the New Year's bowls there shouldn't be any interference with the NFL playoffs. All the traditions remain and the regular season and conference championships still matter (4 wildcards isn't many (in fact it isn't enough), especially since 1 or even 2 slots will frequently go to a minor conference team(s), and they could add a rule that only conference champs can host a playoff game.) And the crowned champ has to beat 3 or 4 legitimate playoff teams ON THE FIELD, rather than posing, campaigning, and/or riding an overrated conference's reputation or legacy high initial poll ranking to a 1-game crap shoot. In reality this playoff system only adds a net of 3 extra games to what exists now. Just 3 additional games, all in January, so the university presidents' objections are shown to be completely bogus.

10 teams in a playoff assures that the resulting champion really is the best in the country. And in the process changes the final game from a fraudulent bogus mythical faux-championship, that is nothing more than a figure-skating exhibition between 2 beauty contest winners, into a legitimate title game.

Expanding to a 12 and eventually 16-team playoff

Of course there can be variations on this basic structure. After the 10-team system proves successful, it should be expanded to 12 teams by adding a 6th BCS bowl. For the same reasons that expanding to a 5th BCS bowl wouldn't hurt the existing BCS bowls, neither would adding a 6th and going to 12 BCS teams won't hurt the existing BCS bowls. It would provide a better chance of including deserving minor conference teams and increase the certainty that the actual best team is included in the playoffs (and the legitimacy of the title game winner.) Plus if you drop the limit of 2 teams maximum per conference down to 3, it should take away the criticism that a potential actual best team (such as Wisconsin or LSU/Auburn) gets frozen out if a conference is very top heavy. Simply reduce to 2 the numbers of byes in Round Two with #3 and #4 hosting #6 and #5 in on-campus home games. Still just 2 games per weekend and thus no interference with the NFL.

The BCS bowls might want to start out with a 12-team format, to maintain more flexibility in matchups and avoid undesirable ones. For example, they might set it up by taking the 6 automatic conference champs, 4 or 5 of the wildcards being the highest BCS-ranked non-conference champs, and 1 or 2 open choices for the original BCS bowls. Would allow them to pull in an otherwise nonqualified Notre Dame (with a certain floor, as is the case now.) Stinks, but might be a necessary concession to get the BCS bowls to agree to a playoff and still gets 10 or 11 legitimate playoff contenders. Or perhaps fill all 6 wildcards with the 6 highest BCS-ranked non-conference champs but allow the original BCS bowls the first choices and the 6th bowl gets the leftovers.

Finally it should be expanded to an optimal 16 team playoff format by eliminating the byes and adding 2 additional bowls to the BCS. With 16 teams of 6 BCS conference champs and 10 wildcards, it is guaranteed that the best team in the country will make the playoffs. All of the top 10 are in, and possibly the entire top 16 if there are no upsets (but the limit of 2-teams per conference maximum will have to be relaxed to a 3 or 4-team per conference max.) The best minor conference team(s) will get a shot to show how they and their conference compare to the BCS conference teams, and not as many teams will get eliminated by a single-fluke injury, freshman learning curve, or horrible call. With only conference champs hosting playoff games (unless none are left) and only 16 teams making the playoffs, every game is still very important, but not ridiculously so. Had the current polled 2-team champ selection been employed in the NFL, many Super Bowl champs would not have played in their champ game. Even though there would now be 4 games in Round Two, conflict with the NFL playoff games can be avoided by adding the 3rd and 4th games to Thursday and Friday nights. Round Two is after the New Year's bowls, so there would be more than a week off for all teams involved.

Initially a 10-team BCS playoff may not be as perfect as jumping straight into a 16-team playoff, but it is far more feasible, politically doable, lays the framework and opens the door to an eventual 16-team system without the upheaval of a playoff replacement of the bowls. In fact if the will is there, this could be done in the next few months, or a year at most. They chose to add a 5th bowl game (though not a new 5th bowl) and went to 10 teams in between seasons, so the precedent is there. The Cotton, Peach, and Florida bowls (and others) would be beating down the BCS doors to step up and be the 5th BCS bowl (and later additions.) It is time to institute a playoff, and there are ZERO good excuses for not doing so.

How would a 10-team BCS bowl playoff look this year?

10-team BCS and no or 3-teams per conference max, same conference matchups avoided in first round (BCS bowls) if possible (similar to the NFL):

12-team BCS and no or 3-teams per conference max:

16 team BCS, no or 4-team per conference max, same conference matchups avoided in first round (BCS bowls) if possible (similar to the NFL's format):

All options are a vast improvement over what we have now, with all games having meaning, and a true national champion earning it on the field.

Most of the major conferences are now open to a playoff, most of the coaches, of course most of the fans have been for a long time, and even some of the college presidents are dropping their opposition to a playoff. The only major obstacles now are the Big 10 (sic) and their commissioner Jim Delany, the Pac 10, and the Rose Bowl: [College Football]Playoff Plunderer (Big 10's Jim Delany)

Time to call their bluff. 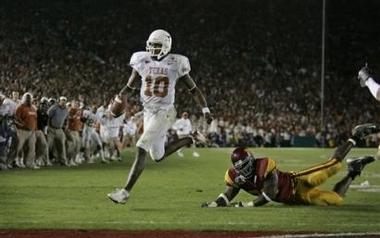 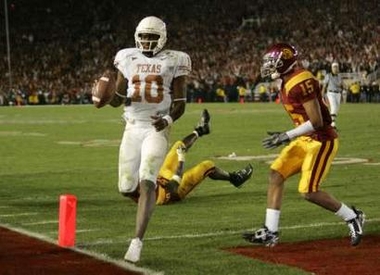