An Open Letter to the Anti-Convention of States Group
theblaze.com ^ | 1/16/16 | Rita Dunaway

I grew up hearing about your amazing work on behalf of conservatism. As a woman, a conservative activist, and a constitutional attorney, I have always admired you as a model of each. So I am disturbed to find myself on the opposite side of you on the issue of the Convention of States Project-the effort to trigger a state-led, Article Five convention to propose constitutional amendments to restrict and reduce federal power.

At the risk of seeming impertinent, I am compelled to address some of the points you raised in your recent letter urging state legislators to resist this effort.

You say that the states should abdicate their Article Five power because the Constitution doesn't spell out every procedural detail of an interstate convention. But as constitutionalists, you and I know that what detail is missing from Constitutional text must be supplied by an understanding of the context and meaning of the words when they were written.

And that is why we do know precisely how an Article Five amendment-proposing convention must operate.

I am highly sympathetic to a convention of the states. But I have a feeling in my bones that TPTB will somehow manipulate, bribe or blackmail their way into control...and then say goodbye to our liberties.

They're disappearing rapidly right now. Maintaining our current course guarantees that our liberties will methodically be stripped away.

Agreed we are losing liberties and freedoms, but a convention has landmines and pitfalls. Who will be the leaders in this convention? It will not be constitutionalism, it’ll be the same leaders of both parties that we contend and battle with today. A convention puts the entire Constitution on the table to amend, what if strengthening State rights over Federal control is horse traded by “our leaders” to amend or remove the 2nd amendment?

WE don’t need a convention to write language to strengthen State rights over Federal rights, those rights are quite clearly stated in the Constitution. We need States to continue challenging the Fed overreach.

This was a Great writing by Rita Dunaway! I’ve mostly agreed with Phyllis Schlafly all my life but she is wrong on this.

To your point on “losing liberties”, I think the point of this spear is Ammon and Ryun Bundy. I admire their courage in standing up to the Feds.

I am NOT sympathetic to a convention of the states. The intellect of any American is not even close to the intellect of a Jefferson, Madison, Adams or Franklin. And the life experiences of any living person is so shallow and effete and FAR removed from Reality compared to the rugged individualism of any person who grew up in the 18th century, even that of the wealthy, who never stepped into mass artificial indoctrination centers with the Fichte/Marxist ideology pumped in night and day to warp all perceptions/Reality. Much less the embedded emotions by the sodomites in Hollywood who have been raping thousands of children in their satanic, drugged orgies (Feldman) and forcing their worldview (desires/attitudes) into their products to be embedded in our children.

Education was entirely Christian and Classical by tutors inside the Natural Family, and only later, after moral formation was any child allowed in any kind of system, removed from mother and father’s control. The ideas were controlled by parents; what went into the heads of their children was a Christian Worldveiw only with the ideas of the geniuses of the Ages, which created Wisdom to a degree that is absent today.

There can be no improvement on the Supreme Law of the Land. NONE. The Constitution has been totally usurped and discarded, since the early 20th century which was done unconstitutionally, and could be changed back with a stroke of any pen by any judge, if they had the courage to defy the evil power.

When a Law ceases to be Just (antithetical to the Constitution), it is “Null and Void”. Simple as that.

The Shadow Government, the one with trillions of dollars, has enough money to bribe and seduce every single member of any convention. And they WILL bribe them—or kill them. We NEVER want ANYONE to be able to rewrite the most brilliant political document in the history of mankind.

P.S. Schlafley is one of the few people whom I could trust, and I question everyone, but God.

I am not sympathetic I am all in, we are going down fast and there is no rescue in site, if we are going to go down we should go down fighting. I don’t see any other alternative this is exactly the situation the founders had in mind.

You’re right the enemies of our republic will try to manipulate but that should not be an excuse to do nothing as we are on the ropes if not down for the count on the floor, we must fight back to our feet, they are already winning, yes sir we are that close to defeat.

Sure doesn’t tell you who the delegates will be, and that is only one issue, there are many others. How about we get close to an Article V that will scare the h e double q out of the Congress and they finally step up and do their job.

...and maybe you think you will have a seat at the table?

State Initiation of Constitutional Amendments: A Guide for Lawyers and Legislative Drafters 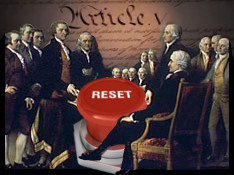 The convention will elect it's own leaders. Why is this important?

No, the Washington elite will not be in control o the convention. That's the whole point.

"A convention puts the entire Constitution on the table to amend"

I don't know where this comes from. Any proposed amendments must be ratified by 3/4's of he state legislatures. This means that any 13 states can say, "No".

Is the 2nd Amendment secure today? What if Ubama gets one more appointment to the Supreme Court replacing a conservative? Will it be secure then?

"We need States to continue challenging the Fed overreach."

How do you suggest they do that?

13 posted on 01/16/2016 10:42:59 AM PST by Da Bilge Troll (Defeatism is not a winning strategy!)
[ Post Reply | Private Reply | To 5 | View Replies]
To: PoloSec; cotton1706; Hostage; Jacquerie; Publius; Repeal The 17th
I am not sympathetic I am all in, we are going down fast and there is no rescue in site, if we are going to go down we should go down fighting. I donâ€™t see any other alternative this is exactly the situation the founders had in mind.

Youâ€™re right the enemies of our republic will try to manipulate but that should not be an excuse to do nothing as we are on the ropes if not down for the count on the floor, we must fight back to our feet, they are already winning, yes sir we are that close to defeat.

Totally agree. A great article by Rita Dunaway. It's Article V Now or we go down without a fight. We're Americans! We fight!

Two other articles by Rita Dunaway:

2. Article V Convention of States to propose Amendments - Needed to try to take power from the federal government back to the states and reel in the federal leviathan.

Quick review: We need 34 states to pass an application, then Congress shall, by law, call a Convention of States as soon as it receives applications from 2/3 of the State Legislatures. That's 34 states. (So far both legislative chambers of 4 States, {Alabama, Alaska, Florida and Georgia}, have completely passed their resolutions and 36 state legislative chambers or bodies have filed or passed resolutions.) Amendments are proposed and voted on at the convention. Each Amendment must be ratified by 3/4 of the states in order to become part of the US Constitution. That's 38 states.

"There are far more political and legal constraints on a runaway convention than on a runaway Congress." - Robert Natelson

***Another good introduction video Convention of States: The Plan to Restore America

***For the Young People Overview of the COS Project at Washington Freedom Summit Laura Fennig, a COS Grassroots Coordinator, describes the COS Project plan and how you can get involved!

The Case for an Article V Convention. Great explanation of an Article V convention to the Massachusetts State Legislature.

Learn about the Convention of States The Problem, the Solution and the Strategy

A Summary of Mark Levin's Proposed Amendments by Jacquerie

We can fight the uniparty! States, the Natural Second Party by Jacquerie

The Indiana Statute that will Govern their Delegates

Congress' Present Duty to Call a Convention. (Part I)

****For those of you that still have doubts about the Article V process, please review: Responses To Convention Of States Opposition My initial concerns were resolved after reading these articles. My attitude now is Go For It!

Sarah Palin: Debunking the myths of a Convention of States

John Birch Society Denies Its History and Betrays Its Mission The original Birchers were for an Article V Convention.

Update: Convention of States by the numbers The current State count

***Indiana Statute - Duties of Article V Convention Delegates A good example for other states and one of the safeguards.

****Proposing Constitutional Amendments by a Convention of States - An Article V Handbook for State Legislators An important resource.

****State Initiation of Constitutional Amendments: A Guide for Lawyers and Legislative Drafters The Bible on Convention of States

Let's all work together to get this going!

My sincere thanks for that post, I have been saying the same thing ever since I first learned of the movement to call a convention.

Here is where we are at:

Article V even if Futile is a needful step to take, otherwise we will lose the high ground.

2. Article V Convention of States to propose Amendments - Needed to try to take power from the federal government back to the states and reel in the federal leviathan.

Will you please add me to this ping list. Thank you.