Today marks the fifteenth anniversary of the day the House of Representatives voted to impeach President William Jefferson Clinton for the high crimes of committing perjury and obstruction of justice while in office.

As more Americans and Congressmen are coming around to the lawless conduct of President Barack Obama and the reality of impeaching to rein in his imperial presidency, it is important to remember that FReepers played a key role in impeaching Bill Clinton.

On October 31, 1998, Free Republic held the first online-organized national protest to call for Clinton's impeachment and removal from office. The rally was broadcast live on C-SPAN for over four hours. Speakers included a who's who of the Vast Right Wing Conspiracy.

FReepers around the country protested Clinton in the Fall at campaign stops for the 1998 mid-term elections causing Clinton to largely withdraw from the trail.

As the Senate deliberated, FReepers delivered a copy of FReepers Alamo-Girl's Clinton Downside Legacy to every Senator's office.

As the Senate trial drew to a close in February 1999, FReepers came together online to design and fund a full page ad in the Washington Times urging the Senate to do its Constitutional duty by convicting and removing Clinton for committing perjury and obstruction of justice while in office. 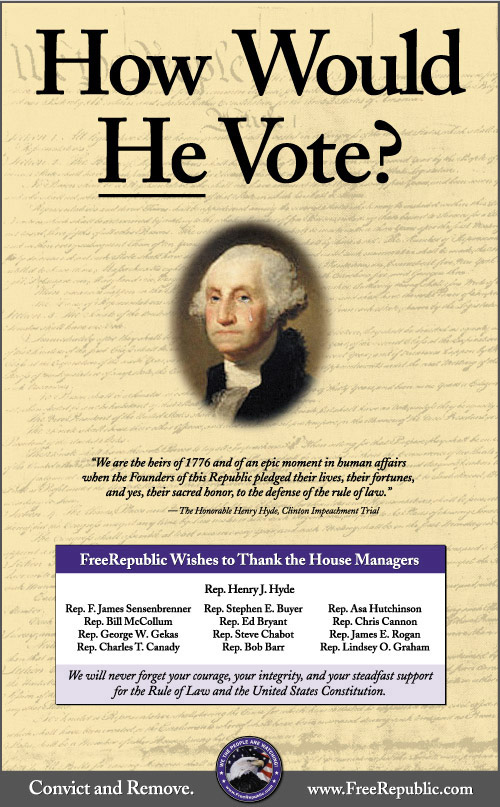 Thanks to Varmint Al for hosting the ad online.

After the Senate trial, FReepers around the country continued to protest Clinton at his appearances and educate the public. That effort provided experience in activism that was put to excellent use during the attempted theft of the 2000 presidential election by Al Gore.

From the 2010 impeachment anniversary commemoration:

Long before the Tea Party groups, Free Republic pioneered use of the Internet in grassroots political activism. Two years after its founding in 1996, Free Republic played a key role in the 1998 impeachment of President William Jefferson Clinton for perjury and obstruction of justice.

The second was a smaller rally at the Capitol organized at the behest of then Rep. Barr.

FReepers started protesting in front of the White House every Saturday to educate the public about the rampant criminality and China-gate treason in the Clinton administration.

FReepers and other patriotic Americans around the country protested Clinton on the mid-term elections campaign trail.

The union goon beating of brother and sister Don and Teri Adams as they protested a Clinton fundraising appearance in Philadelphia, sparked the Free Republic 'March for Justice' held at the Washington Monument on October 31, 1998.

Founder of the D.C. Chapter of FreeRepublic.com, MrConfettiMan (who has since passed away) wrote his thoughts about the rally back then:

"I drove into Washington for the big event and ended up parking relatively close to the White House. As such, I decided to swing by the Lion’s Den to see if there were any early morning freepers there. I recognized Libloather, a participant from our October 3rd White House protest, who is prominently featured in the March for Justice banners found on FR, as I was approaching. We spent a few minutes chatting about old times and then I moved on to the mall, the site of our history-making event.

"By the time I got there it was about 8:30AM and a small crowd of volunteers had gathered. By 9:00AM, we not only had more people than the anti-Starr rally last weekend, we had more flags than they had people. Let me say that again. It’s three hours away from the start of our rally and we already had more flags than they had people. There’s no denying it, we’re good. Real good.

"As the morning wore on, one of the most exciting spectacles was all the people walking towards the event. Every time you took a look towards the Washington monument you’d see crowds of people with signs and banners walking toward the stage. It was great. They were like ants. Before the start of the event I’d run into just about every freeper who was at our October 3rd White House protest including lancer, Jack Aubrey, Marylander, Kathy, Aloyce, Siouxz, Chris P. and two guys from NJ (I’m sorry guys, your online moniker’s fail me). I also met Highlander with his impressive “Impeach One for the Gipper” signs. (When I left the post-rally party, I took his signs with me and promised to try and restore them for a subsequent visit to a White House protest.)

"The highlight of the day were the speeches. They were amazing. I have to admit that I’m one of those people who is so filled with emotion that sometimes an inspiring rendition of the national anthem at a sporting event can bring me to tears. I lost count of how many times that happened during the March. Hearing the words from the speakers on stage, coupled with the cheers from the crowd, were just too much to handle on several occassions. I was filled with such a sense of joy and pride to be among all of you and to finally witness people taking a stand against the crisis we are facing. (You know, I’ve been telling my family for a couple of years now that I’m thinking about moving to a cave to get away from our dysfunctional society. It’s sort of a joke but I get no joy from being around the general public anymore. I feel as if I’m surrounded by those from the polls who support Clinton and it disgusts me. Not so yesterday.)

"It’s hard to pick a favorite speaker but I was literally amazed by Rejoice. If you thought her speech at the March was good, I wish you could’ve heard the words she spoke at the post-rally party. She is truly a gifted person with a wonderful message. I was also impressed, as always, with Bob Barr and Ambassador Keyes. I think it’s an example of the worthiness of our cause (not to mention the hard work of CaL and the other organizers) that we were able to arrange such a fine lineup of speakers.

"As the rally was breaking up, Tinman told me he and some other freepers were going up to the White House to say hello to Clinton freeper-style and asked me to join them. Now the protests we’ve held thus far at the White House were successful but low key. We simply held our signs and marched back and forth interacting with tourists on occasion. This time was anything but low key. BettyBoop led us through several different protest chats and we made a lot of noise. The crowd of tourists just stood around and watched us in awe. It was great. We shouted “Fire the Liar”, “Jail to the Chief” and many other slogans. It was another freeper moment for the archives.

"At the post-party rally, I was able to put faces to names for LurkerNoMore, Normally a Lurker and Curmudgeon. While there, Submareener was logged into FR from his laptop and was reading us some of the latest posts interjecting his own playful commentary once in a while. It was a nice opportunity to sit back and talk as a group about our feelings on the event and what we thought we should do next. I left earlier than I wanted to at around 9:30AM but I was simply too tired to stay any longer. (It’s hard work being a burr in Clinton’s behind.) I left knowing the world is a slightly better place because of what we did and knowing that I had a lot of new friends, who thanks to the FR and the ‘net, I’d be able to talk to everyday.

"A big hearty thank you goes out to everybody involved in organizing the March for Justice!"

A refresher course on the Ellen Rometsch strategy from Richard Poe:

Poe: Well, in many cases, these threats were made quite openly. For example, on February 8, 1998, with pressure mounting to impeach Bill Clinton, George Stephanopoulos appeared on ABC’s This Week with Sam Donaldson and Cokie Roberts. Stephanopoulos had resigned as White House communications chief in 1996 and become an ABC news analyst. But he was still carrying the Clintons’ water, as his next words made clear.

Sam Donaldson asked, “Are you suggesting for a moment that what they’re beginning to say is that if you investigate this too much, we’ll put all your dirty linen right on the table? Every member of the Senate? Every member of the press corps?” To which Stephanopoulos replied, “Absolutely. The president said he would never resign, and I think some around him are willing to take everyone down with him.”

This was a clear threat, delivered openly, on national television. Through Stephanopoulos, the Clintons were warning Congress and the media to back off. The threat worked. David P. Schippers, who was Chief Investigative Counsel for the Clinton impeachment, reveals in his book Sell-Out that Republican leaders, from the get-go, had no intention of holding a proper impeachment trial or of convicting Bill Clinton. It was all a charade.

One down and one to go.

Thanks for the reminder. That puts a spring in my step. God bless you.

"Another item on such a list would be a provision that when a president is impeached and removed, his VP goes out the door with him and the office is either vacant until the next election or an emergency election is held to fill the office for the remainder of the current term. Granted removing a president should be difficult but it should not be impossible and if we couldn't remove Slick, we'd not have been able to remove Hitler or Nero either."

Trent Lott simply and correctly refused to hand the country over to Algor with a year left on SlicKKK's second term and let Algor run and probably win as an incumbent. That scenario should not be possible.

Reminds me of the White House tour map....

We need the same push for our current Liar in Chief.

Wishing Fellow FR's many more (of 'rats/dems/commees/marxists... even the occasional GOP-E, as necessary).

10 posted on 12/19/2013 7:07:13 AM PST by C210N (When people fear government there is tyranny; when government fears people there is liberty)
[ Post Reply | Private Reply | To 1 | View Replies]
To: kristinn
Stephanopoulos announced that the Clinton White House was planning what he called an “Ellen Rometsch” strategy.

In Clinton's case, his "Ellen" saved the dress and saved her life.

” - - - David P. Schippers, who was Chief Investigative Counsel for the Clinton impeachment, reveals in his book Sell-Out that Republican leaders, from the get-go, had no intention of holding a proper impeachment trial or of convicting Bill Clinton. It was all a charade. - - - “

And thus began the current era of no Congressional Checks and Balances on Imperial-minded elected officials such as Pelosi, Reid and Obama.

Anyone have a pic of Mr. Cigarman?

Personally I do not celebrate.

This botched operation paved the way for future Presidents (most notably the current White Hut occupant) to misbehave and smash the Constitution in any way they wish.

Clinton taught them all that if you hunker down and go on offense you can survive even the worst of scandals. I have seen the change in attitude and tactics even down to the local level. That has NOT been a good thing for the body politic.

Congrats to you old timers and FreeRepublic!!

I wish I knew about this site back then, I would have proudly stood with you!!