HILLSVILLE - You may remember her as a Playboy cover girl and centerfold back in 1985.

Or you may remember her as Al Bundy's shoe store fantasy girl on the belated sitcom "Married With Children."

Maybe you've seen her roles in some movies - "Marked for Death," "Innocent Blood," "Return of the Killer Tomatoes," even a bit part in the Brian DePalma classic, "Scarface."

But on Monday, she was Theresa "Teri" Maglio , plaintiff in a personal injury lawsuit that would otherwise have passed unremarkably if not for her participation.

It is unlikely that the seven men sitting on a Carroll County jury will ever forget her face, much less just about every other part of her. In exchange for their jury service, they got to watch a 1996 video of an in-the-buff Maglio strutting on a strip club stage. Other potential jurors, three women and another male, missed the show - struck from the jury after they confessed they might allow their feelings about her work to get in the way of making a fair decision.

"That was more of a boring show, that particular show that you saw," a matter-of-fact Maglio told the jurors afterward in the opening day of a three-day trial.

It's not that her heart wasn't in it. Maglio, 40, said that her pole-swinging, acrobatic best work is years behind her, the result of a 1994 collision on Interstate 77 near Hillsville.

She and her husband were stopped with their U-Haul truck in traffic because of a wreck farther up the interstate when a semi-truck with an empty trailer rear-ended the Maglios.

The crash left her in constant pain, and several surgeries - including two spinal fusions at the neck and lower back - could not restore the former gymnast to her once-famous agility, she testified.

"I just don't have the strength to do what I used to do," said Maglio, whose lawsuit asks for $3 million for lost wages, medical bills, and pain and suffering.

The defendants, truck driver David S. Horton and his employer, O.W. Slane Glass Co., both of Statesville, N.C., disagree with that assessment of her talents.

It's not about how Maglio is making money, said one of her attorneys, Art Strickland of Roanoke. It's about how much better she could have done, and the pain she could have avoided, if Horton's trailer hadn't slammed into Weigel's truck, he said.

"She suffered a very dramatic and very substantial loss," Strickland told the jury.

"Teri Weigel rode that rabbit into eternity, and more power to her," Margold said by phone from Los Angeles.

Weigel - her maiden name - has made 40 adult movies, said her husband and business partner, Murrill Maglio. The couple met in their native Florida, but now live in Los Angeles.

Teri Maglio even spent some time working at one of Nevada's legal brothels, the Moonlight Bunny Ranch. Still, her mainstream potential is strong, her husband said. She will act this television season in an episode of the HBO show, "Mind of the Married Man," the couple said.

Teri Maglio put herself among the top names in exotic dancing with her energetic live shows, taking an unconventional route to what she considered a conventional childhood dream, a lifetime of performing.

She said she avoided surgery for as long as possible after the accident, opting instead for therapy, massage, even painkillers. She knew it was time for surgery, though, when she had to drag her leg behind her after a performance.

"It was so humiliating to me, 'cause I'm so tough," she said, breaking into sobs.

Why not quit? her attorney, Strickland, asked her.

"It's like telling you or telling a doctor to give up his dream," Weigel said. "That's too hard to do."

You can wear that thing out ya know....in her business you would think she'd be used to getting rear-ended, geez 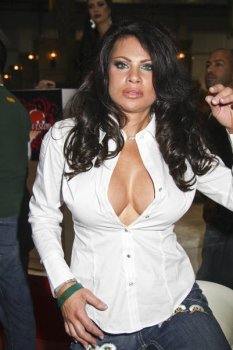 AINews: What are you doing now in the [Adult] Industry?

Teri: I'm doing such a wide variety of things it's hard to answer! Actually I took four years off and I'm back! I was hit by a semi truck and I just had surgery. I had surgery done here [points to a nonexistent flaw] for my back I had three herniations, and I had one done here. Can't you see it somewhere?

AINews: You mean that little mark there?

Teri: I had back surgery and I took four almost five years off it was a pretty bad accident. I'm finally cured 100 percent!

AINews: I see you're well, and I'm glad you're still alive - and you look great!

Teri: Thank you! I think it's all that resting. It put a halt to all that partying, you know? Because it was one club after another, and all we used to do was sex and clubs and party, so it put a hold on that a little bit and I got my head together. But this is fun! I love it, so I'm coming back!

AINews: So are you touring now?

Teri: I'm starting in February. My first tour starts at Al's Diamond Cabaret and that in Reading, PA. That's my first stop that's one of my favorite cities.

AINews: If club owners want to book you how to they get a hold of you?

It looks as though some half-baked surgeon stuck a pair of halved Nerf footballs in there.