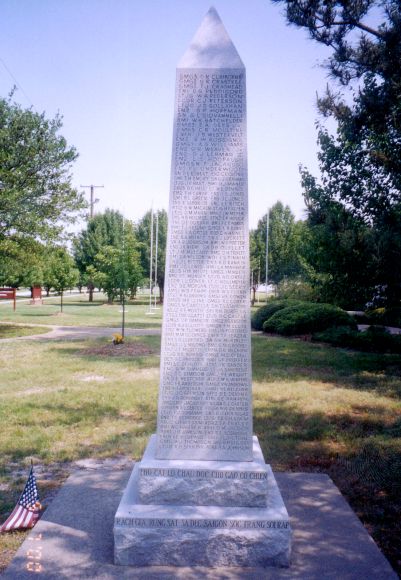 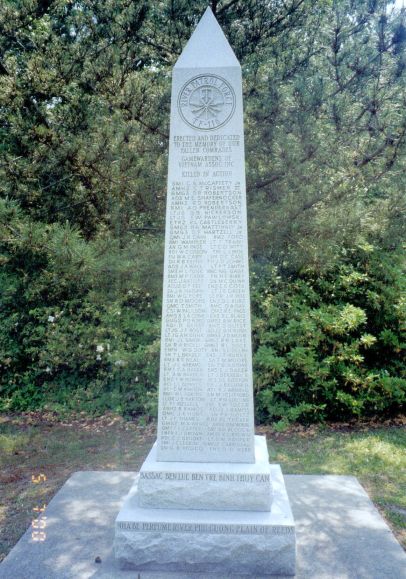 Gamewardens of Vietnam Association was formed in 1968 with 12 charter members. These men were U.S. Navy veterans of the River Patrol Force, Task Force 116 whose area of operations was the Mekong Delta of South Vietnam from 1966 to 1971.

The River Patrol Forces Memorial Monument is a 15-foot granite obelisk that sits on a 4-foot square tiered base. Around the base of the obelisk are inscribed the names of the battle engagements in the Mekong Delta that Task Force 116 actively participated in. Inscribed on the length of the obelisk are the names honoring the 290 sailors of the black beret "brown water navy" who died in service to their country during the Vietnam War. Both the U.S. Navy and River Patrol Force Task Force 116 emblems are attached to the obelisk.

The inscription below the Task Force 116 emblem reads, "ERECTED AND DEDICATED TO THE MEMORY OF OUR FALLEN COMRADES".

The River Patrol Forces Memorial Monument was dedicated by the Gamewardens of Vietnam Association in August 1980 to perpetuate the memory of those who were killed during that in-country naval operation. Many former Gamewardens and their families came from all over the country for the memorial monument dedication service. Threatening skies reminded many River Patrol Force veterans of the monsoon season in Vietnam while taps, played by a Navy band, sounded over the Little Creek Naval Amphibious Base. Former POW LCDR Michael Christian, USN (Ret.) delivered the keynote address during the ceremony.

The name of our boat they call PBR,
The places we travel are many and far.
Our main objective the Vietnam coast,
Where few are our friends and the VC our host.

We travel at night and return in the morn,
To wipe out the VC this vow we have sworn.
Each day brings us sorrow each night brings us fear,
Deep down in our hearts we know "Charlie" is near.

At night on the river we hope and we pray,
That God will protect and keep "Charlie" away.
The silence is there it is on every side,
For somewhere out there our enemy hides.

Our Coxswain is cautious, our Gunner is tight,
Then comes the shout "They're there on the right"
The fifties are roaring, they're load and they're clear,
We've got "Charlie" worried, there's panic and fear.

Then comes the silence, the end of the fight,
The enemy's gone, he's run of in the night.
The coming of dawn means a patrol that is new,
We thank our protector for seeing us through.

Sorry about running late today. I made it by 8 a.m. EST so not too bad. Arrrghh!

Folks, we had qute an ordeal with our Dell Dimension 4500S yesterday. The third time it froze on us. It happened before in February and then in May. I clicked on the internet access icon in the system tray, then clicked on disconnet and that's when it happened.

So, we turned it off and then back on, Clicked on the Start menu to check something, it didn't respond. Click Start menu again this time to turn the computer, no response.

So, I turned it off and then back on. Finally it's working properly but we lost about 15000 files on the computer in the process. Two improper shutdowns in a row.

In any event, it's working O.K. for now. We'll see what happens.:-D

Very interesting topic today, as always. Thanks for your efforts!

Packing continues here. I'm not sure if the end is in sight but the garage is getting full. I see a sense of misproportion here. :)

Hope you are well!


Holidays
Note: Some Holidays are only applicable on a given "day of the week"

Religious History
1853 Baptist pioneer missionary J. Hudson Taylor, 21, set sail from England to China. In 1865, Taylor founded the China Inland Mission, now known as Overseas Missionary Fellowship. Its U.S. branch is HQ'd today in Robesonia, PA.
1938 The Carpatho-Russian Diocese of the Eastern Rite of the U.S.A. was canonized as a diocese of the Greek Orthodox Church. Father Orestes Chornock, Orthodox bishop of Agathonikia, was made Metropolitan of the new diocese.
1943 The first Baptist church was organized in Anchorage. (Prior to this date, there had been no Baptist church in Anchorage, and only one Baptist church in all the rest of the state of Alaska.)
1948 American missionary and martyr Jim Elliot wrote in his journal: 'Father, make of me a "crisis man." Make of me a fork, so that men must turn one way or another on facing Christ in me.'
1971 Death of William F. Albright, 80, American Methodist archaeologist. Professor of Semitic languages at Johns Hopkins for nearly 30 years, he penned over 1,000 articles and books, and led several Near Eastern expeditions which excavated the biblical sites of Gibeah, Bethel and Petra.


Thought for the day :
"Man and wife make one fool."

You might be a drunk if...your only conversations with God are over a commode pleading "just help me stop puking and I'll NEVER drink again!"

Murphys Law of the day...(car laws)
Being dead right doesn't make you any less dead.

No matter what we think about the way this country is going there is no denying we have wonderful people in our Armed Forces and there is hope.

It's good to hear from you. Thanks for stopping in at the Foxhole and as always you are in our prayers and thank you for serving.

Trust me, unpacking will take much longer but won't be as hectic. You'll be amazed at what you can do without. LOL.

Good to see you. I'm well thank you.

I will tell you though our poor SAM was attacked by yellow jackets yesterday and received several stings, quite a few in fact.

The remarkable Bell UH-1 Iroquois (Huey) has been the quintessential all-purpose military helicopter for over three decades. It has been used by all four U.S. services, and international forces, in missions ranging from mountain rescue to troop transport, and from anti-armor to anti-submarine warfare. The Huey got its distinctive nickname from its original Army designation, the HU-1. It was later redesignated UH-1, under a tri-service agreement.

Bell produced two major versions of the UH-1 - the single engine Models 204 and 205 and the twin engine Models 212 and 412. Although both were UH-1s, there were enough differences to warrant considering them two separate aircraft.

The UH-1 Iroquois is used for command and control, medical evacuation, and to transport personnel, equipment and supplies. The latest models are the UH-1H and the UH-1V. Initially procured in 1959, the Huey is the senior member of the Army’s helicopter fleet. The last production aircraft was delivered in 1976. More than 9,000 were produced in 20 years. Considered to be the most widely used helicopter in the world, the Huey is flown today by about 40 countries. Evolving through 13 models, the Huey flew millions of flight hours in support of a wide variety of Army missions.

In 1995 the Army's UH-1 Residual Fleet was projected to be approximately 1000 aircraft. The 1998 Aviation Modernization Plan reduced the Residual Fleet to approximately 700 aircraft to be retained through 2015. The 1999 Utility Helicopter Fleet Modernization Analysis recommended a reengine and upgrade for the UH-1 for the LUH [light utility helicopter] mission, with a SLEP (including overhauled T53) for Strategic Reserve & Residual TDA. The 2000 Aviation Modernization Plan / Aviation Transformation Plan divested the UH-1 completely by the end of FY04, and sustained the current configuration through the divestiture period. Army support for UH-1 ends after September 20004. Until then support will remains as currently established.

The Aviation Restructure Initiative or ARI is a comprehensive and complex effort to shape army aviation units affected by the Army's downsizing to render more capable and effective units. The total effects of ARI are to downsize the aviation force, while at the same time enhancing the capability and sustainability of Army aviation units on the battlefield. ARI causes roughly a 40 percent decrease in the number of aircraft, while resulting in roughly a 20 percent reduction in aviation enlisted personnel. Most all OH-58A and C, UH-1, and AH-1 mechanics are displaced by Kiowa Warrior, Blackhawk and Apache modernized systems over the course of the next several years. The Army's UH-1 fleet has had problems that led to approximately 20-25% of the aircraft still flyable as of late 2000. Many of these that are flyable have very few hours until they run out of time and are grounded again. The Army plans to have the entire UH-1 fleet out of the inventory (AD/USAR/ARNG) by the end of FY2004.

Armaments:
M-240 7.62mm machine gun or
GAU-16 .50 caliber machine gun or
GAU-17 7.62mm automatic gun
All three weapons systems are crew-served, and the GAU-2B/A can also be controlled by the pilot in the fixed forward firing mode.
The helicopter can also carry two 7-shot or 19-shot 2.75" rocket pods.

All photos Copyright of Global Security.Org