Miracle of the Snow to Be Commemorated at St. Mary Major
Zenit News Agency ^ | August 1, 2003

Miracle of the Snow to Be Commemorated at St. Mary Major

"Liberian" Basilica Will Be Inundated with Flowers on Tuesday

VATICAN CITY, AUGUST 1, 2003 (Zenit.org).- The patriarchal basilica of St. Mary Major will be "inundated" with white petals on Tuesday, August 5, solemn feast of St. Mary of the Snows.

The celebration recalls the dedication of the basilica and the famous "miracle of snow," which occurred on August 5, 358 A.D. when snow fell on this little Roman hill of the Esquiline, one of Rome's famous seven hills. It was taken as an extraordinary sign -- August is a hot and humid month in Rome-- of the Virgin's invitation to construct a church in her honor.

According to tradition, on the night of August 5 the Virgin appeared amid the snow to Pope Liberius and patrician Giovanni and his wife. A century later, the Council of Ephesus (431) declared Mary Most Holy Mother of God, and Pope Sixtus III ordered that the basilica be constructed in her honor. The icon of Mary Salvation of the Roman People ("Salus Populi Romani") is venerated in the basilica.

St. Mary Major is also known as the Liberian Basilica, named after Pope Liberius, as well as the Spanish Basilica, because the gold-covered roof was a fruit of the Spanish conquest of America. The basilica will hold a solemn Pontifical Mass, officiated by Cardinal Carlo Furno, archpriest of the basilica, followed by the Second Vespers for next Tuesday. There will be a rain of flowers in both celebrations.

The festivities will include the participation of the venerable liberian musical chapel, directed by maestro Valenti Miserachs Grau, president of the Pontifical Institute of Sacred Music.

A number of events, conferences, visits and liturgical celebrations, will begin on August 3, to celebrate the occasion, which this year is of particular interest as it is the Year of the Rosary.

Dedication of the Church of St. Mary of the Snows 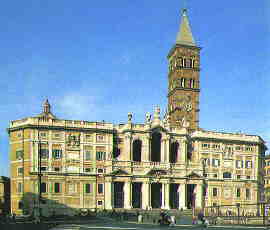 St. Mary Major is the greatest of many churches dedicated to Our Lady; it is the only Roman basilica which, in spite of several additional decorations, has retained its original shape. It was built, as the legend goes, in 352 B.C. after an appearance of the Blessed Virgin. The basilica, also called "Liberiana", dates from the time of Pope Sixtus III(432-440).

That would appear to make more sense.

Our priest said that there used to be a tradition of dropping rose petals from the very top of this basilica -- simulating the snowfall.

Don't know if they still do it today.

Dedication of the Basilica of Saint Mary Major in Rome

After the dogma that Mary is the Mother of God was defined by the Council of Ephesus in the year 431, Pope Sixtus III dedicated this basilica in Rome to the Mother of God. Later it became known as "Saint Mary Major". It is believed to be the oldest church in the West dedicated to the Blessed Virgin Mary.

Collect:
Lord,
pardon the sins of Your people.
May the prayers of Mary, the mother of Your Son,
help to save us
for by ourselves we cannot please You.
Grant this through our Lord Jesus Christ, Your Son,
who lives and reigns with You and the Holy Spirit,
one God, for ever and ever. Amen.

First Reading: Revelation 21:1-5a
Then I saw a new heaven and a new earth; for the first heaven and the first earth had passed away, and the sea was no more. And I saw the holy city, new Jerusalem, coming down out of heaven from God, prepared as a bride adorned for her husband; and I heard a loud voice from the throne saying, "Behold, the dwelling of God is with men. He will dwell with them, and they shall be his people, and God himself will be with them; he will wipe away every tear from their eyes, and death shall be no more, neither shall there be mourning nor crying nor pain any more, for the former things have passed away."

And he who sat upon the throne said, "Behold, I make all things new." Also he said, "Write this, for these words are trustworthy and true."

Gospel Reading: Luke 11:27-28
As Jesus said this, a woman in the crowd raised her voice and said to him, "Blessed is the womb that bore you, and the breasts that you sucked!" But He said, "Blessed rather are those who hear the word of God and keep it!"