St. Catherine of Siena deliberately told popes, queens and kings how to behave. She was spontaneous, unafraid of authority and fearless in the face of death. She was a Dominican religious who corresponded with Popes and peasants alike.

Born in 1347, at Siena, Italy, Saint Catherine lived through the Black Death, famine and numerous civil wars. During her lifetime the papal residence moved from Rome to Avignon and back again, and the great western Schism pitted Pope against anti-pope.

Even at a young age, Catherine sensed the troubled society around her and wanted to help. Childishly she dreamed of dressing up like a man to become a Dominican friar; more than once she ran into the street to kiss the ground where Dominicans walked. l

Catherine's parents tried hard to discourage her from becoming religious, but eventually, when she was about sixteen-years-old, Catherine, with the help of the Holy Spirit, was permitted to enter the Third Order lay sisters of Penance of St Dominic, the Mantellate.

During her life in the Third Order, St. Catherine had numerous visions and long ecstasies, but she is most remembered for her writings, which eventually led to her being declared a Doctor of the Church by Pope Paul VI in 1970.

Truth be known, she didn't learn how to write until the end of her life, but that never stopped her. She dictated her literary masterpieces, sometimes reciting three documents to three secretaries at the same time.

Her bold letters, even today, have a way of shocking the reader into reality. The style of her letters was lean and direct. She sometimes broke with polite convention. For example, during the Great Western Schism, in defense of Pope Urban VI, she rebuked three Italian cardinals who were supporting the anti-pope, writing to them, "what made you do this? You are flowers who shed no perfume, but stench that makes the whole world reek." 2

These words are strong, and it is not recommended that we imitate them. St. Catherine had a unique call from God, which Pope Paul VI referred to as her "charism of exhortation." 3 it was her great love and fidelity to the Pope and college of bishops that prompted her to respond to God's urgings that she be forthright with those who were against the Vicar of Christ.

Wanting Pope Gregory XI to leave his residency in Avignon and return to Rome, and knowing the Supreme Pontiff was afraid of being poisoned, Catherine wrote to him, "Be not a timorous child, but manly . . ." 4 she spoke to him as a loving daughter would. In other parts of her letters to the Popes she used an affectionate pet name for them: Babbo, which means Daddy.

Giving It To the Queen

To Giovanna, the Queen of Naples, who supported the anti-pope and was accused of murdering her husband, St. Catherine wrote, "You know that you do ill, but like a sick and passionate woman, you let yourself be guided by your passions." 5

Catherine risked death by sending such words to the authorities of her time. But she was not afraid. "I trust in the Lord Jesus Christ, not in myself" was one of her favorite prayers. 6

There was a dramatic moment in St. Catherine's life, when she proved to the public that death, for her,had no sting.

Once, a young man, Nicolo di Toldo, sentenced to be beheaded, asked Catherine to come to his execution. The saint caressed his head as it lay on the block. Later, she wrote to Blessed Raymond of Capua about the event. "I have just taken a head into my hands and have been moved so deeply that my heart cannot grasp it . . . I waited for him at the place of execution. . . he arrived like a meek lamb and when he saw me he began to smile. He asked me to make the sign of the cross over him . . . I stretched out his neck and bent down to him, reminding him of the blood of the Lamb. His lips kept murmuring only "Jesus" and "Catherine," and he was still murmuring when I received his head into my hands . . . my soul rested in peace and quiet, so aware of the fragrance of blood that I could not remove the blood which had splashed onto me." 7

It was with this kind of courage that Catherine approached the Vicar of Christ. She succeeded in convincing Pope Gregory XI to return to Rome, but he soon died and Pope Urban VI took his place. Relentless, Catherine began to write to the new Pope. She was direct with him and told him he needed to control his temper. Pope Urban VI appreciated her forthright counsel. When an anti-pope was supported and the Great Western Schism began, Urban VI invited Catherine to Rome. He needed her support. She went to Rome in 1378 and from there wrote regular letters to state and Church leaders in defense of Pope Urban's sole right to the papal throne. Every day she walked to St. Peter's Basilica and prayed for church unity. After two years of this exhaustive work, she died in 1380 at age thirty-three.

St. Catherine's impact on her society was so profound that Europe was unable to forget her. Only eighty-one years after her death, she was canonized by Pope Pius II. Even now, Rome recalls her aptitude for unprecedented action. For example, Pope John Paul II recently honored her "impassioned liveliness" and "freedom of initiative," when he marked the 25th anniversary of her being named one of the FIRST women Doctors of the Church. 8

© 1996 Blue Army of Our Lady of Fatima
Reprinted from March/April 1996 SOUL Magazine.

St. Catherine of Sienna, Doctor of the Church, pray for us.

Monday the 29th of April is the Feast Day of St. Catherine of Siena. How perfect of the Lord to arrange it so that here feast should fall in the middle of this nightmare for the Church in America.

St. Catherine was God's gift to the Church in a time of trouble and schism, and this thread is for celebrating the deeds she did for love of Jesus Christ and to share the beauty of her writings. 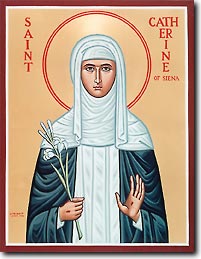 
Everlasting God, you so kindled the flame of holy love in the heart of blessed Catherine of Siena, as she meditated on the passion of your Son our Savior, that she devoted her life to the poor and the sick, and to the peace and unity of the Church: Grant that we also may share in the mystery of Christ's death, and rejoice in the revelation of his glory; who lives and reigns with you and the Holy Spirit, one God, now and for ever. Amen.

11 posted on 04/28/2002 1:05:31 PM PDT by OxfordMovement
[ Post Reply | Private Reply | To 10 | View Replies]
To: OxfordMovement; BlessedBeGod; Lady In Blue; JMJ333; fatima
Eternal Trinity, Godhead, mystery deep as the sea, you could give me no greater gift than the gift of yourself. For you are a fire ever burning and never consumed, which itself consumes all the selfish love that fills my being. Yes, you are a fire that takes away the coldness, illuminates the mind with its light, and causes me to know your truth. And I know that you are beauty and wisdom itself. The food of angels, you gave yourself to man in the fire of your love.

-from On Divine Providence by Saint Catherine of Siena

"You are flowers who shed no perfume, but stench that makes the whole world reek." 2

There are perhaps some american Cardinals that need to hear this?

Dear Lord, please raise up a St. Catherine for us!

Heh heh. Did you see whose are Tuesday and Thursday?