There's nothing to add to this: 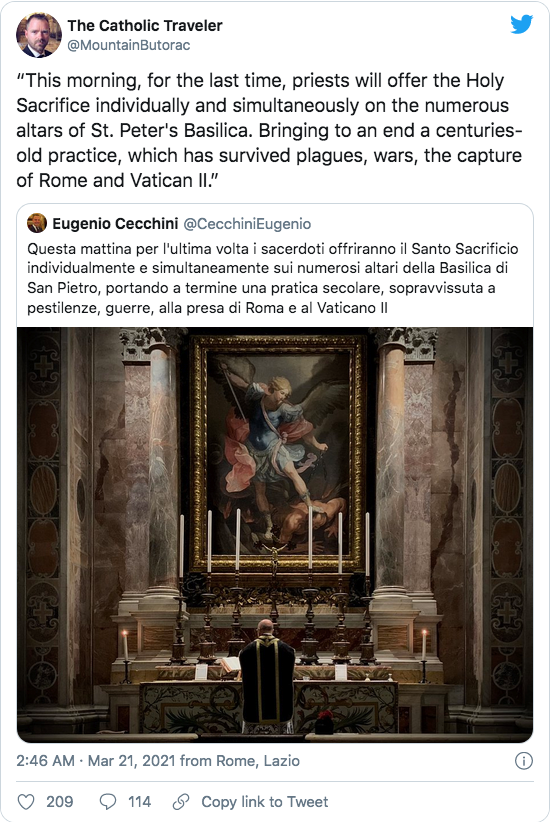 Nothing, except this: this order was by FRANCIS (Jorge Mario Bergoglio). He ordered it. He may have used an irrelevant machine cog in the wrong dicastery to initial the document, but it all came from him. Seeing those throngs of young priests celebrating Mass after Mass in the many altars of the Vatican Basilica, a tradition that dated from the very first ages of side altars in the Old Basilica built by Constantine, was obviously something that rattled him.

Fine: there are hundreds of churches and thousands of Altars in Rome, and there's nothing he can do about it.

It used to be said that something was a sure thing, a certainty, by saying :
"Is the Pope Catholic ?
I am not sure anymore that this pope is even catholic (small c).
He seems more of a revisionist Marxist, a Globalist, than a Catholic.

The Vatican under the command of Pope Francis is busy rebuking ownership of firearms for personal protection to the cheers of Islamic followers as well as decrying attempting any evangelical conversion of islamists plus suppressing followers of the pre Vatican 2 liturgy form including the latin mass But when it comes to other forms of mono theistic beliefs such as the One World Abu Dhabi Movement whule terming it Abrahamism.

As Pope Francis refuses to say one word disclaiming and decrying what practice adherents of the Islam code Sharia not only claim, but truly believe that God has authorized them to any evil means using force or decption used to convert is justified as well as kill those who refuse to submit to their version of Gods will .

No Mass should be celebrated in St. Peter’s until this Pope is gone and the Basilica is re-consecrated. It is not a holy place at this time.

Demonstrating yet again that he serves a different Master.