A bishop of The Episcopal Church announced that he'll be stepping down from office weeks after the denomination’s disciplinary panel ruled that he violated canon law by refusing to allow same-sex marriages in his diocese.

Addressing the Diocesan Convention on Saturday, Bishop William Love of the Episcopal Diocese of Albany said he will resign as bishop on Feb. 1, 2021, according to Anglican Ink.

On Oct. 5, the denomination’s Hearing Panel found Bishop Love guilty “by clear and convincing evidence” of violating Resolution B012, a measure passed in 2018 requiring that all Episcopal dioceses allow for the blessing of same-sex unions.

The panel stated: “Depriving same-sex couples of access to matrimony materially and substantially impacts their spiritual, emotional and physical well-being as people of God. The expression of love changes dramatically when it is recognized, welcomed and witnessed. The loss of a public ceremony impacts the couple, the family and friends and the community.”

“I am very disappointed and strongly disagree with the Decision of the Hearing Panel, particularly their belief that I violated my ordination vows and their argument that B012 was passed as an authorized revision to the Book of Common Prayer,” Bishop Love wrote in an op-ed published by Anglican Ink.

While the bishop is resigning, he has questioned the interpretation of the nature of B012. “Was it properly constituted and passed as an authorized revision to the Book of Common Prayer (BCP) or not?” he asked.

“It is my belief and that of my legal team that B012 was presented as an alternative resolution to one which would have changed the BCP. It was intended to ensure that same-sex marriages would be allowed in every Diocese, regardless of the Diocesan Bishop’s theological views regarding marriage, while at the same time not changing the 1979 Prayer Book,” he explained.

However, the bishop added, “given the nature of this case, and the Episcopal Church’s demonstrated intent to ensure all dioceses (where civil law permits) allow for same-sex marriages, I have no reason to believe that appealing the Hearing Panel’s Decision would result in any different outcome.”

The B012 resolution impacted not only the Diocese of Albany but also the dioceses of Dallas, Texas; North Dakota; Springfield, Illinois; Tennessee; the U.S. Virgin Islands; the Diocese of Florida, and the Diocese of Central Florida.

In November 2018, Love sent out an official letter stating that same-sex weddings were not going to be allowed in his diocese in spite of Resolution B012.

“Jesus is calling the Church to follow His example. He is calling the Church to have the courage to speak His Truth in love about homosexual behavior — even though it isn’t politically correct,” Love wrote at the time. “Sexual relations between two men or two women was never part of God’s plan and is a distortion of His design in creation and as such is to be avoided.” 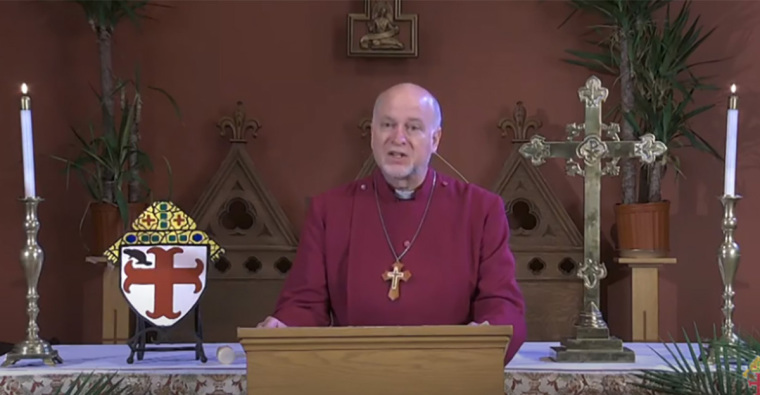 Being forced out of your church by your denomination for being obedient to Scripture.

RE: That’s some church.

They may call themselves a church, but in reality, they are a church NO MORE.

It is a great honor to follow Christ, and no dishonor at all to be forced out of an apostate “church.”

Sad, isn’t it? But also encouraging to see him stand firm regardless. So few ever do that.

He knows Who he answers to!!!! Narrow is the gate . . . https://simplybible.com/f05c-narrow-is-the-gate.htm

“Depriving same-sex couples of access to matrimony materially and substantially impacts their spiritual, emotional and physical well-being as people of God.”

Think about a religious group that supposedly believes this, but will only deign to marry their homosexual members if the state they happen to be in first gives its permission.

And a resume enhancer in the eyes of Christians. And most importantly, God the Father will tell him well done good and faithful servant.

Church of Satan and an honest Christian.
Good for the Bishop.
Good good.
(What a sicko, perverted church!)

I wonder how many times you had to read the headline before you believed it said what you thought it said.

Think of all of the Episcopal churches that are led by someone in a “same sex marriage” contrary to Scripture.

Does he get burned at the stake for his crime? Or is that still a thing?

13 posted on 10/25/2020 12:12:39 PM PDT by rintintin (The)
[ Post Reply | Private Reply | To 2 | View Replies]
To: Ransomed
...Think about a religious group that supposedly believes this, but will only deign to marry their homosexual members if the state they happen to be in first gives its permission....

Correct. I left six months ago. I was holding out, hoping that my Dallas Diocese would split... but they decided not to. But it was VERY close.

Bless Bishop Love. I believe he is still a faithful bishop in the sight of God.

Episcopal church is close to Catholicism, he could go there.

Understood. Pcusa has similar evil problems. As do many additional churches-gone-bad. If a pastor or bishop peaches or teaches for mass scale abortions, homosexual “marriage” or other obviously evil practices, it is just about the worst thing possible. Because the church
Is supposed to be a reliable source of moral values, imho. Up until recently, millions of non- Catholics including many very anti-Catholic people still respected the Catholic Church for teaching core moral values. Wolves in sheep’s clothing have infiltrated many churches, alas. At the very least these evil clerics should take down the crossEs From their steeples and stop pretending to be Christian churches anymore. False advertising