A disciplinary panel of The Episcopal Church has ruled that a bishop who refused to allow the blessing of same-sex marriages in his diocese violated canon law.

Bishop William Love of the Episcopal Diocese of Albany was punished last year with a restriction on his ministerial duties after he refused to allow same-sex marriages in his diocese.

Love had refused to allow for the enforcement of Resolution B012, a measure passed in 2018 requiring that all Episcopal dioceses allow for the blessing of same-sex unions.

A Title IV Hearing Panel, which focuses on issues of ecclesiastical discipline when a clergy is accused of misconduct, released a unanimous opinion last Friday finding Love guilty.

“Love’s actions in issuing a Pastoral Direction to his clergy that they refrain from performing same-sex marriages violated the Discipline and Worship of the Church as Bishop Love promised in his ordinal vows. His actions, therefore, constitute a breach of Canon IV.3.2(a),” ruled the panel.

The panel added that Resolution B012 allowed for bishops and clergy who oppose same-sex marriage to be exempted from blessing such unions, as long as a replacement could be found.

“Importantly, an accommodation is offered to diocesan bishops who oppose same sex-marriage to invite another bishop into the diocese to provide pastoral support for same-sex couples who seek to be able to utilize the rites in their local congregation or worshipping community,” continued the panel.

“Depriving same sex couples of access to matrimony materially and substantially impacts their spiritual, emotional and physical well-being as people of God. The expression of love changes dramatically when it is recognized, welcomed and witnessed. The loss of a public ceremony impacts the couple, the family and friends and the community.”

In a letter sent to his diocese on Monday, Love said he was “very disappointed and strongly disagree with the Decision of the Hearing Panel.”

“Unfortunately, given the nature of this case, I have no reason to believe that appealing the Hearing Panel’s Decision would result in any different outcome,” wrote Love.

Love went on to note in his letter that an additional hearing will take place “within the month” regarding “the terms of discipline to be carried out.”

“Whatever the final outcome, it will severely impact not only me and the ministry entrusted to me as Bishop of Albany, but it will also seriously impact the life and ministry of the Diocese. I continue to pray that somehow God will use all of this for His purposes,” he continued.

In response to the decision, Jeff Walton of the theologically conservative Institute on Religion and Democracy wrote a blog post that quoted theologian Richard John Neuhaus.

“Where orthodoxy is optional, orthodoxy will sooner or later be proscribed,” read the Neuhaus quote. “Orthodoxy, no matter how politely expressed, suggests that there is a right and a wrong, a true and a false, about things.”

“When orthodoxy is optional, it is admitted under a rule of liberal tolerance that cannot help but be intolerant of talk about right and wrong, true and false. It is therefore a conditional admission, depending upon orthodoxy’s good behavior.”

In July 2018, the Episcopal Church General Convention passed Resolution B012, mandating that all dioceses must bless same-sex unions, even ones where leadership objects.

In addition to the Diocese of Albany, the new resolution impacted the dioceses of Dallas, Texas; North Dakota; Springfield, Illinois; Tennessee; the U.S. Virgin Islands; the Diocese of Florida, and the Diocese of Central Florida.

In November 2018, Love sent out an official letter stating that same-sex weddings were not going to be allowed in his diocese in spite of Resolution B012.

"Sexual relations between two men or two women was never part of God's plan and is a distortion of His design in creation and as such is to be avoided."

A Title IV Hearing Panel regarding whether Love was rightfully restricted in his ministry was held in June via online teleconference, centered exclusively on whether his actions violated canon law.

Paul Cooney, who represented The Episcopal Church, explained to the hearing panel in June that Love was obligated to follow the new resolution.

“Canon 118 provides that wherever permitted by secular law and the dioceses of The Episcopal Church, opposite sex and same-sex marriage both may be solemnized by Episcopal clergy,” argued Cooney.

“We contend that the Albany marriage canons’ limitation of access to holy matrimony to couples who are a man and a woman is in conflict with the standard of access in Canon 118.” 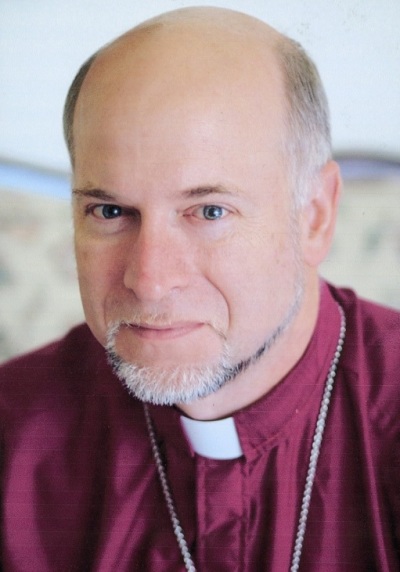 The Rt. Rev. William H. Love, bishop of The Episcopal Diocese of Albany.

This stupid bishop follows God’s law and not ours and should therefore be punished.

Thus always with liberal bad ideas...
First, they beg for toleration.
Then they push for its acceptance.
Next they demand it to be affirmed as a positive good.
Finally, it becomes mandatory.

Time to review that “cannon law” that violates Scripture.

Unfortunately, this is happening everywhere now. The old and true morality was not well defended. It was undermined by soft “feel good” people who thought others would pick up the cause for them. Now all we have left are Bonhoffers and folks losing their jobs for defending the truth. Too many everywhere are left standing alone to reap the consequences of the fools destroying our churches and our country.

they can live together without church’s blessings

such blessings would only make a total mockery of said church

Pretty sure God had some pretty strong opinions about homosexuality. If I were a betting man, I would not bet that he would support his church participating in a homosexual marriage.

If god wanted to create a world with same sexes together,the human race would be dead before it began. I don’t care what people do. I don’t have time nor energy to focus on others but the homosexual agenda has purposely rotted away the church and perverted the true essence of god.

“First, they beg for toleration.
Then they push for its acceptance.
Next they demand it to be affirmed as a positive good.
Finally, it becomes mandatory.”

At the end, it becomes not just orthodoxy, but punishment is mandated for all non-compliers.

Well, then, a pedo-child pastor should be fine for overseeing the child education, a serial rapist for the teen girls club, and a grifter in charge of church finances.

13 posted on 10/06/2020 2:46:22 PM PDT by GreyFriar (Spearhead - 3rd Armored Division 75-78 & 83-87)
[ Post Reply | Private Reply | To 1 | View Replies]
To: SeekAndFind
When the fake “marriage” ball started getting rolling in more states about a decade ago, a rule was made that clergy in same-sex relationships HAD to get married within 6 months if they resided where it was then legal, or had to cease co-habiitating.

Considering that many homos eschew marriage, I’m sure that rule was just swept under the carpet when a lot of them didn’t get “married.”

14 posted on 10/06/2020 4:32:49 PM PDT by fwdude (Pass up too many hills to die on, and you will eventually fall off the edge of the world.)
[ Post Reply | Private Reply | To 1 | View Replies]
To: SeekAndFind
“Resolution B012 allowed for bishops and clergy who oppose same-sex marriage to be exempted from blessing such unions, as long as a replacement could be found.

“‘Importantly, an accommodation is offered to diocesan bishops who oppose same sex-marriage to invite another bishop into the diocese to provide pastoral support for same-sex couples who seek to be able to utilize the rites in their local congregation or worshipping community,’ continued the panel.”

Oh, how nice. You still MUST facilitate the heresy even though you don’t do it directly.

If any FReeper still associates with this demonic cult of the Episcopal Church, you need to wake up.

“Canon 118 provides that wherever permitted by secular law and the dioceses of The Episcopal Church, opposite sex and same-sex marriage both may be solemnized by Episcopal clergy,”

So as with women’s ordination, “may be” has now become must be. My ancestors must be spinning in their graves.