As a biker in the 1960s, Joe Campbell always carried a gun with him. He had gotten into many fights and stolen from people. He needed to be ready for anything.

“I carried a gun around,” he said, “because of the amount of people I had wronged.”

His life was a chaotic mix of violence, drugs, alcohol, gambling and other biker gang activity in Illinois, and he knew it “would destroy my marriage,” Campbell says.

When his wife Connie got saved, Joe didn’t immediately join her. In fact, he mocked her and constantly hounded her to return to their former sinful lifestyle.

After six months, Connie invited a church couple over for lunch and when they skipped out on the date, Joe got mad — mad enough to go to the church of 25 members and find out why they were a no-show. (At the time, Joe and Connie didn’t have a landline phone to call and find out.)

But instead of confronting the couple for standing them up, Joe got confronted by the Holy Spirit in the sermon. At the altar call, the lanky, longhaired, rough and tumble character responded to the invitation for salvation.

At 29 years old, he didn’t immediately feel any different. But Jesus had come into his heart at that moment in 1971.

The next day, two of his friends came to visit and asked him if it were true, according to word on the street, that he “got religious.”

They invited him to their normal routine of parties, but instead of using and abusing drugs, Joe Campbell with my dad in Nigeria

Joe witnessed to all his old friends. He was a changed man.

This was the 1960s, a time when it wasn’t uncommon for churches to hold revival services every night for a month. Joe’s church was in the midst of one of those extended revivals, and he attended faithfully.

After a month, he poured his Jack Daniel’s down the drain and disposed of his drugs. Nobody knew about his stash, so nobody told him he should do this. It was simply the Holy Spirit who convicted him, and he spontaneously responded.

“I didn’t have a real problem turning away from the drugs and alcohol,” he said. “It was just such a powerful experience that my wife and I just walked away from.”

A few days later, some old biker buddies subtly seduced him to fall back into sin. He wouldn’t have to drink at the party, they said. They invited him to ride, not doing anything wrong.

Joe remained steadfast — he would sell his Harley Davidson, he retorted.

Eventually they gave up and roared off on their bikes.

Joe loved his Harley dearly and never wanted to sell it, but he made a vow and was loathe to go back on his word. He later replaced it with a pickup truck. Selling his Harley was one of the hardest things he had to do, he says. The author, at left, when she was 13, with her brother, sister and Joe Campbell.

“When I sold my motorcycle that was a major breakthrough.” he says. “Something broke in the spiritual realm.”

After his old friends drove off, he walked home and God spoke to him: “If you continue to walk with Me, you’ll preach to the nations.”

Before being saved, Joe made money as an entrepreneur and by gambling. After he got saved, he needed to find a job and began working in the telephone industry.

Within two years he was named youth pastor of a church in Maryland, Illinois for one year.

He eventually became pastor of a church in Mounds, Illinois, for three years.

Joe visited an old Christian friend at the Door Christian Church in Arizona. Joe responded to the fiery preaching at a conference and caught the vision for church-planting and revival.

He pastored for a year and a half in Phoenix, Arizona and then four and a half in Maryland, Illinois. Then he moved to Chandler, Arizona, where he is pastor today (with a stint in Malaysia from 1987 to 90). He now totals 46 years pastoring and has preached in India, Ghana, Mexico, the Dominican Republic, Holland and Russia.

But best of all, Joe has preached in Nigeria. That’s where my parents’ serve in ministry, while I and my sister study at a Christian high school in Los Angeles. Pastor Joe oversees my parents’ ministry.

And Pastor Joe is like a grandfather to me.

This kinda reminds my of that great song by the Kingston Trio, ‘The Reverend Mr. Black’.

At one gathering, there were groups of Christian bikers. Their stories were amazing. They still wore biker gear, and some of them just looked massive and menacing at first.

But then you saw their eyes and their faces, and they just lit up with the Holy Spirit of God.

I don't know how to describe it, except.....it was moving.

4 posted on 04/26/2020 1:16:18 PM PDT by SkyPilot
[ Post Reply | Private Reply | To 1 | View Replies]
To: SkyPilot
I went to a couple of Promise Keepers rally in the 1990s, including the massive gathering on the National Mall on October 4th, 1997. At one gathering, there were groups of Christian bikers. Their stories were amazing. They still wore biker gear, and some of them just looked massive and menacing at first. But then you saw their eyes and their faces, and they just lit up with the Holy Spirit of God. I don't know how to describe it, except.....it was moving.

That was before masculinity was considered to be toxic, though I do not think the outfits are needed to convey that or need to be retained.

I met a group of bikers from MN who were on fire for the Lord. Very interesting group.

This kinda reminds my of that great song by the Kingston Trio, ‘The Reverend Mr. Black’.

I like it! One for you in return, about a rough cussing fishermen: Don Francisco - He's Alive

7 posted on 04/26/2020 1:27:50 PM PDT by daniel1212 (Trust the risen Lord Jesus to save you as a damned and destitute sinner + be baptized + follow Him)
[ Post Reply | Private Reply | To 3 | View Replies]
To: SkyPilot; Salamander
Bobby Steele is the leader of The Undead, a horror punk rock band and and a former guitarist for the Misfits. Bobby was with The Misfits in their heyday. One of Bobby's stories is that when he was wasted in the late 1970s in NYC, he threw up in his hero John Lennon's lap at a bar.

Bobby is now clean and Born Again. He still rocks out (catch his show if you can). He often goes to horror movie etc meet and greet events and has a table of merchandise and albums etc. for sale and signing. Here he is at the Chiller Expo with his wife, Diana 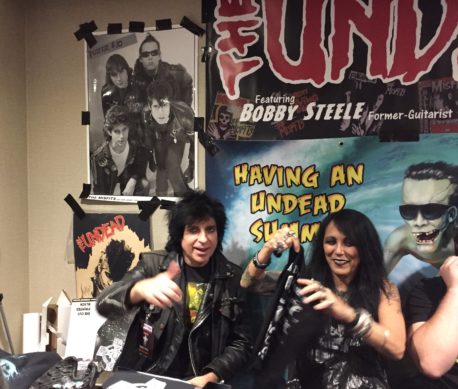 Other bands and vendors have all sorts of devil and Satanic things. But Bobby always has a stack of Bibles he gives away - for free.. He said that many people think the devil stuff is cool, but they get scared at the Bible's. He said someone once asked Bobby to sign their Bible, and Bobby said "I didn't think that was appropriate." Check him out.

I was at that “Stand in the Gap” event. Went with a group of men from a church in Missouri.

I only knew one person in the group, but the complete trip was moving.

Did you notice not a single piece of trash was left on the Mall grounds?

Everyone was such examples of men that it was astounding.

Something is wrong at the website. Instead of pictures with captions; only the captions appeared.

#1 Joe Campbell with my dad in Nigeria

#2 The author, at left, when she was 13, with her brother, sister and Joe Campbell.

It was amazing, wasn't it?

I saw teams of men cleaning up the Mall after the event. The media could not believe it.

We were both privileged to be there.

I don't think there will ever be an event like this in our nation again.

Nice, I did not know that. Another weird one was Peter Steele of Type O Negative, he went from a very vocal atheist to a believer before he died. Two Steeles, weird.