The Anglican Church of Canada will run out of members by the year 2040 if its current rate of decline continues, according to a recently released report.

The Rev. Canon Neil Elliot gave a presentation last Saturday at the ACC Council of General Synod on the statistics for the members of the worldwide Anglican Communion.

The statistics were compiled last year and reflected membership numbers in 2017. It was the first report on church statistics since 2001.

According to Elliot’s report, in 2017, the ACC had approximately 357,000 members, representing 1 percent of the overall national population.

As Elliot noted, from 1961 to 2001, membership declined by about 50 percent, leading him to project that the church body will no longer have any members by 2040 if the decline continues at its current rate.

Archbishop Linda Nicholls, head of the ACC, said in a statement that the report was a “wake-up call,” stressing the need for the denomination to focus on the mission at hand.

“We’re called to do and be God’s people in a particular place, for the purpose of sharing the good news of Jesus Christ, and the only question is, ‘How do we need to share it, so that it might be heard by those around us?’” stated Nicholls, as reported by the ACC national newspaper the Anglican Journal.

“It’s my hope that when we leave here, the message we take is not ‘Oh no, the church is dying,’ but ‘Oh, we’ve got a challenge’ … But we’ve also got a hopeful way of addressing that.”

The ACC has experienced divisive debate over LGBT issues, with many leaving the church over the past several years due to the overall theologically liberal direction of the denomination.

In 2008, for example, theologian J.I. Packer, named one of the 25 most influential evangelicals in the world by Time magazine in 2005, left the denomination over what he labeled "poisonous liberalism."

In July, the ACC General Synod did not pass an amendment to their canon to allow for the blessing of same-sex marriages despite strong support within the denomination.

“We, members of the House of Bishops of the Anglican Church of Canada, see the pain and anguish inflicted on LGBTQ2S+ people, on members of the General Synod, across the church, and in the world, as a result of the work and the vote on the matter of Canon XXI, concerning marriage,” stated the House of Bishops, as reported by Episcopal News Service.

“We see your tears, we hear your cries, and we weep with you. We have caused deep hurt. We are profoundly sorry.”

ANGLICAN CHURCH OF CANADA, BY THE NUMBERS 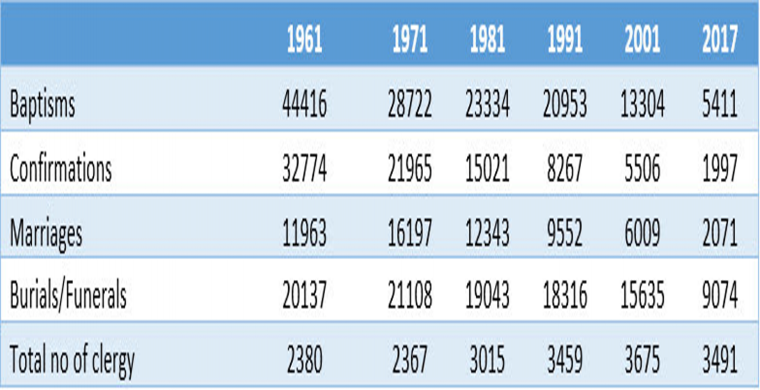 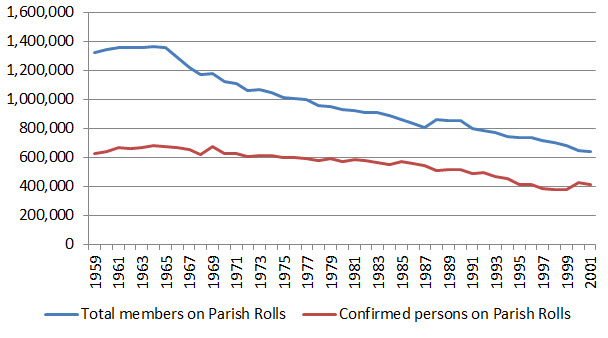 Are you a member of their denomination?

The lesson learned is that churches never grow by caving into the world’s demands away from holiness.

Amid all this decline in congregation and activities, they actually increased the number of clergy.

7 posted on 11/18/2019 8:12:21 AM PST by rightwingintelligentsia (Democrats: The perfect party for the helpless and stupid, and those who would rule over them.)
[ Post Reply | Private Reply | To 2 | View Replies]
To: SeekAndFind

Why belong to a church that does not believe in God? I left the Episcopal Church 30 years ago when it became clear that the Clergy were becoming nonbelievers.

So their is one minister for every 115 confirmed members. The whole operation is either subsidized by England, or the past donations of deceased dowagers who bequeathed fortunes decades ago.

> “We, members of the House of Bishops of the Anglican Church of Canada, see the pain and anguish inflicted on LGBTQ2S+ people... <

No wonder their membership is declining. The correct term is not LGBTQ2S+. It’s LGBTQ2S++.

Nice boomer attitude that has done this country well.

“Amid all this decline in congregation and activities, they actually increased the number of clergy.

The yearly salaries and personnel expenses have probably increased each year.

Everyone loves to work for any church with great salaries/benefits at no personal costs and other benefits from housing, to vehicles, 4 weeks of vacation and time off for meetings and self improvement and of course a 2 month sabbatical every 4 years that doesn’t count as vacation.

Salaries are increased yearly like working for a union in a company.

Perfect liberal organization: membership collapses, number of services performed for membership drops off a cliff...
Number of clergy? Goes up.

Somebody smells a pension fund collapse and is suddenly worried.

13 posted on 11/18/2019 8:31:00 AM PST by ameribbean expat (Socialism is like a nude beach - - sounds great til you actually get there. -- David Burge.)
[ Post Reply | Private Reply | To 1 | View Replies]
To: Dr. Sivana
The whole operation is either subsidized by England, or the past donations of deceased dowagers who bequeathed fortunes decades ago.

They wont get any money from the Church of England, its own finances and service attendance figures are in a slump. The US Episcopal church is on life support as well mostly kept alive by the fact that a single parish church, Trinity Wall Street, owns 14 acres of property in downtown Manhattan. In the meantime the breakaway Anglican Church in North America (ACNA) is slowly growing. ACNA is much more conservative.

The whole Episcopal Church is living on its inherited assets but that can only last so long. Like the Catholic Church the one thing it's good at is running schools (Without the b*ggery - mostly)

Like the RCC, the “wake up call” was fifty years ago.
The snooze button is never a good move.

I am supposed to be concerned about the collapse of an apostate, leftist pile of twaddle because it “used to be” different?

Both trace their origins to some fat corrupt English King starting a religion so he could chop off his wife's head and get a new wife.

turn your back on God, then your church dies.