SACRAMENTO, September 17, 2019 (LifeSiteNews) – The California legislature has voted in a resolution that blames "religious groups" who hold to biblical understandings of sex and gender as responsible for "disproportionately high rates" of suicide among homosexuals and transgenders.

“The stigma associated with being LGBTQ often created by groups in society, including therapists and religious groups, has caused disproportionately high rates of suicide, attempted suicide, depression, rejection, and isolation amongst LGBTQ and questioning individuals,” it claims. It calls on “the people of California – especially its counselors, pastors, religious workers, educators, and legislators” to eschew and work against anti-LGBTQ “stigma.”

The resolution, which has no legal force but formalizes the official position of the state legislature, passed the state Senate 29-7 on September 4 and the state Assembly 61-11 on September 9. It does not require the governor’s signature.

“We are treading into freedom of speech territory that I think should concern all of us,” warned Republican state Sen. Andreas Borgeas, who voted against ACR 99. “When an individual seeks therapy or guidance before a religious leader, whether it be a mosque, a temple, or a church, that’s a private setting...To disallow or create the pathway where we tell individuals they cannot say certain things should give us pause.”

Yeah... the mental illness which is the substrate of the LGBTQ cohort has nothing to do with it.

You have said in the past that too much religion causes people to kill themselves. These folks agree with you.
Do you agree with them? 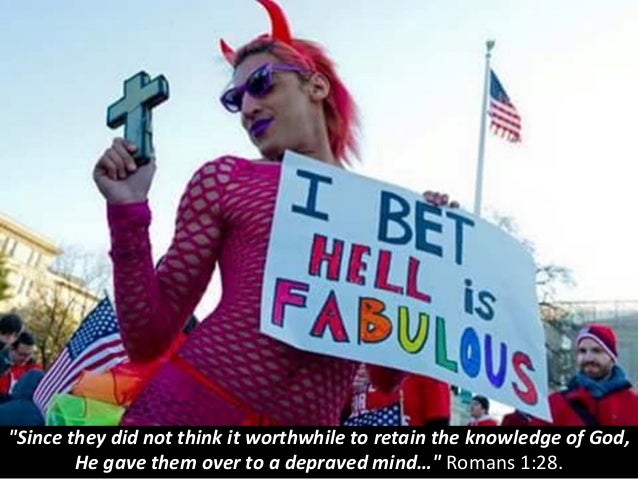 People engaging in aberrant behavior always blame others for their actions.

These people are psychotic hypocritical idiots.

It could not possibly be that mentally ill people commit suicide more often than people who are not mentally ill.

9 posted on 09/18/2019 7:06:19 PM PDT by E. Pluribus Unum ("If liberty means anything at all, it means the right to tell people what they do not want to hear.")
[ Post Reply | Private Reply | To 1 | View Replies]
To: marshmallow
The California legislature has voted in a resolution that blames "religious groups" who hold to biblical understandings of sex and gender as responsible for "disproportionately high rates" of suicide among homosexuals and transgenders.

Replace the phrase "religious groups" with "God" - since the California Legislature's complaint is against the Bible - God's Word. They should read Romans 1 to get a better understanding about this " disproportionately high rate" of suicide among homosexuals and transgenders.
God has given them up to their sin (since they have hardened their dark hearts). And thus they have 'received the recompense of their error that is due'.


Romans 1:18-28
18 For the wrath of God is revealed from heaven against all ungodliness and unrighteousness of men, who hold [back] the truth in unrighteousness;
19 Because that which may be known of God is manifest in them; for God hath shewed it unto them.
20 For the invisible things of him from the creation of the world are clearly seen, being understood by the things that are made, even his eternal power and Godhead; so that they are without excuse:
21 Because that, when they knew God, they glorified him not as God, neither were thankful; but became vain in their imaginations, and their foolish heart was darkened.
22 Professing themselves to be wise, they became fools,
23 And changed the glory of the uncorruptible God into an image made like to corruptible man, and to birds, and fourfooted beasts, and creeping things.
24 Wherefore God also gave them up to uncleanness through the lusts of their own hearts, to dishonour their own bodies between themselves:
25 Who changed the truth of God into a lie, and worshipped and served the creature more than the Creator, who is blessed for ever. Amen.
26 For this cause God gave them up unto vile affections: for even their women did change the natural use into that which is against nature:
27 And likewise also the men, leaving the natural use of the woman, burned in their lust one toward another; men with men working that which is unseemly, and receiving in themselves that recompence of their error which was meet.
28 And even as they did not like to retain God in their knowledge, God gave them over to a reprobate mind, to do those things which are not convenient;

The leftists/atheists and other demented people are turning out a crop of *Attention Whores* who are told that if they act out like this they are special and will get recognition and attention. When all the sane people ignore their tantrums and bizarre behaviors, the self-made deviants become despondent and start trying suicidal behaviors to get more attention.

Leftards and their dim libtard compatriots are the real cause, but they gain power by creating division and destruction and dont care one iota for the lives they destroy. These miscreants offer their easy non-solutions with which tell mentally sick people and criminals ‘what they want to hear’ and egg them on to even more self-destructive behaviors.

I’ve read that the ones that undergo the sex change surgery have around 19 times the suicide rate of the general population.

I wonder if in a lucid moment they realize the mutilation of their body is irreversible or they discover that normal people do not want to be involved with what are now carnival side-show freaks; or both.

It’s not a good sign of the times that the medical establishment indulges these very mentally ill people.

If “religious” folks really have this power, why is not working on the abortionists?

Why is Hitlery suiciding the LGBLTs?

Do they know things about her and Bill?

I would love to review the primary data of the peer reviewed and results duplicated, journal published study that proves the assertions of the bill.

If this scientific study and evidence are not available to the lawmakers, they are involved in a faith-based pursuit.

Research will show that suicide rates among transgendered patients is in direct correlation with the mental health of the individual.
The influence of religion, especially Christianity, has a salutary effect on limiting the rate of suicide among this population.
Denying the patient the healing influence of Christ increases the likelihood of a dire outcome for that person.
The madness of mitigating against primary sources of health is a genuine cause of worsened outcome for transgendered people.

But...but...but I thought the NRA was the people killing the suicidal people.