Catholic bishops from across the U.S. are gathering Wednesday for a weeklong retreat on the clergy sex abuse crisis at a seminary near Chicago. Organizers said the retreat, which was requested by Pope Francis, will focus on prayer and spiritual reflection and not policy-making.

The gathering comes as CBS News has also learned of several cases involving nuns accused of sexual misconduct. The Survivors Network of Those Abused by Priests – or SNAP – said it doesn't keep count of sexual abuse allegations, but CBS News' Nikki Battiste has spoken with several women who recently reported misconduct, ranging from forceful kissing to molestation, all carried out by nuns.

When Trish Cahill was 15 years old she said she confided in Sister Eileen Shaw at a convent in New Jersey. Cahill said she told Shaw things she'd never revealed to anyone about her now-deceased uncle – a priest – whom she claims sexually abused her, starting at age five. "I would have done anything for her. I would have died for her," Cahill said. "She gave me everything that was lacking that I didn't even know I was lacking. I was so broken. She filled in all those pieces."

She now describes that process as "grooming," saying Shaw plied her with drugs and alcohol while teaching her how to have sex with a woman. "I'm with my friends during the day. And I'm with this pedophile nun on the evenings and on the weekends, and in the summer," Cahill said.

TOPICS: Moral Issues; Religion & Culture; Religion & Science
KEYWORDS: homosexuality; homosexuals; love; not; perversion
I was doing research on abortions, homosexual 'families', plus all the other stories of moral decay in our civilization, i.e. the Hart lesbians, the Turpin family torture and the large number of murder/suicides by men & women of their partners and small children.

Terrified for the future of my grandchildren and the world they face.

Praying that God will send us new inspiration and soon.

Catholic Crisis - The True Source of the Problem

God wrote in the Bible that when Christ comes again there will be a great apostasy in the Church and man will be a law unto himself like the days of Noah. So, your prayer is most likely answered.

Here it comes.
Obama promised the Pope if he backed his agenda, the abuse would be swept under the table.
Now that he is waffling, the MSM is now going to attack with vengeance. 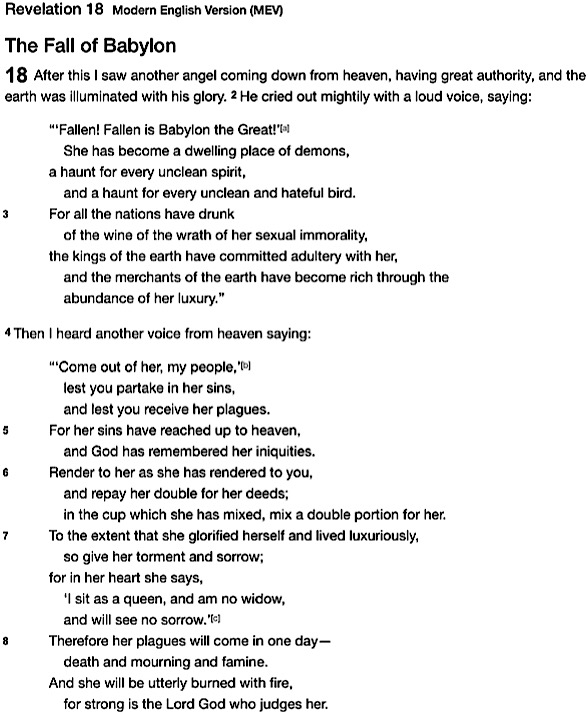 The key there is verse 7, where Babylon the Great is telling herself “I sit as queen and am no widow.”

There is one previous prophecy in the Bible where a city is identified as a widow, and a former queen, and that is in Lamentations 1:1. In Revelation, Babylon the Great is explicitly rejecting that prophecy. Compare this chapter of Revelation to that chapter in Lamentations and you’ll see that is just one of many similarities.

Yes, so many concern-trolls.