This is the miracle that led to the Fatima children's canonization (Catholic Caucus)
cna ^ | May 12, 2017 | Alvaro de Juana Monument of the Guardian Angel of Portugal apparition to the three little shepherd children of Fatima. Credit: Daniel Ibanez / CNA.

Fatima, Portugal, May 12, 2017 / 07:41 am (CNA/EWTN News).- Tomorrow, on the 100th anniversary of Mary’s first appearance at Fatima, Pope Francis will canonize Jacinta and Francisco Marto, two of the three shepherd children who witnessed the Marian apparitions.

A press conference preceding the Pope’s arrival highlighted the miracle that paved the way for their canonization. The miracle involved a Brazilian boy named Lucas, who was miraculously healed through the intercession of the shepherd children.

Jacinta and Francisco both died before age 10 and will become the youngest non-martyrs to be canonized. Sister Lucia, the third visionary, lived much longer, dying in 2005 at the age of 97. The Church is currently examining documents and collecting testimonies for her beatification cause.

In recounting the story of their son’s healing in the face of almost certain death, João Batista and his wife Lucila Yurie could not hold back tears.

“His head hit the ground and he sustained a very serious injury, which caused a loss of brain tissue,” Batista said during the press conference at the Fatima Shrine.

Teetering between life and death, “he was given medical care in our city, Juranda, and given the severity of his condition, he was transferred to the hospital in Campo Mourao, Parana.”

“When we got there, Lucas was in a deep coma. His heart stopped twice, and they performed an emergency operation.”

It was at that moment that “we began to pray to Jesus and Our Lady of Fatima, to whom we have a great devotion,” Batista said.


“The next day we called the Carmelite convent of Campo Mouro to ask the sisters to pray for the boy,” he said. But the community was observing a period of silence, and so the message did not get to them.

As the days went by, Lucas became worse, his father recounted. On March 6, the doctors considered transferring him to another hospital, since their facility did not have the necessary care for a boy of his age.

“They told us that the chance of the boy surviving was low, and if he did survive, his recovery would be very slow,” likely dealing with “severe cognitive disabilities or even remaining in a vegetative state.”

On March 7, Batista said, “we called the convent again.” That time, they were able to get their prayer request to the sisters.

“One of them ran to the relics of Blessed Francisco and Jacinta, which were next to the tabernacle, and felt the impulse to pray the following prayer: ‘Shepherds, save this child, who is a child like you’…she also persuaded the other sisters to pray to the little shepherds to intercede for him.”

“And so they did,” Batista said. “In the same way, all of us, the family, began to pray to the little shepherds, and two days later, on March 9, Lucas woke up and began to speak, even asking for his little sister.” On the 11th, he left the ICU and was discharged from the hospital a few days later.

Since that time, Lucas “has been completely well and has no symptoms or after effects,” the child’s father said. “He has the same intelligence (as he did before the accident), the same character, everything is the same.”

“The doctors, some of them non-believers, said that his recovery had no explanation.”

Batista and his wife are grateful to the doctors who cared for their son, and to the postulator of the canonization cause of the little shepherds, “for all the care given throughout this process.”

But they are especially grateful to God. “We thank God for the cure of Lucas and we know with all the faith we have in our hearts, that this miracle was obtained through the intercession of the little shepherds Francisco and Jacinta.”

“We feel a great joy because this is the miracle that leads to their canonization, but especially we feel the blessing of the friendship of these two children who helped our child and who now help our family,” Batista said. 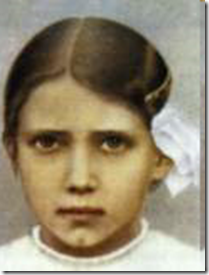 4 posted on 05/12/2017 4:51:45 PM PDT by Mrs. Don-o (Never be afraid of loving the Blessed Virgin too much. You can never love her more than Jesus did.)
[ Post Reply | Private Reply | To 1 | View Replies]
To: NYer
What has me puzzled is this: Why did the Church choose Saint Jacinta’s official portrait that depicts her with a white lime caked face (her body was buried in lime to expedite decomposition)? Almost zombie like. Why in their portraits are both she and Fransisco holding lamps raising images of Revelation's Two Witnesses? Finally, why is Pope Francis tomorrow going to say that he is the Bishop in white, which references the wording contained in the 3rd Secret?
5 posted on 05/12/2017 5:11:59 PM PDT by winoneforthegipper ("If you can't ride two horses at once, you probably shouldn't be in the circus" - SP)
[ Post Reply | Private Reply | To 2 | View Replies]
To: NYer

How did they die?

Clearly the reference was made with purpose.

influenza. Foretold by Mary in one of the apparitions

The Miracle for the Canonization of Jacinta and Francesco [Catholic Caucus]

My question is this - why not Sister Lucia? Why is she no officially Sainted yet? A hundred years have passed, and the Vatican needs MORE time to make that determination?

Sister Lucia memories, writings, etc. were narrated to the Carmelite sisters, who shared her daily life for 57 years.

The book is called: “A Pathway under the Gaze of Mary.” It is Sister Lucia’s biography.