5 reasons why young people are seeking old ways of doing church
Church in a Circle ^ | March 31, 2015 | Kathleen and Kevin-Neil Ward

When I was young, there was nothing worse for a church than to be “traditional”. We stripped back the liturgy, swapped the organ for a drum-kit, and replaced the hymnals with Hillsong. We unceremoniously dumped the icons, architecture and rituals that had fed the church for hundreds of years. We were desperate to present a cool, socially acceptable, “relevant” package for modern culture.

Today, something unexpected is happening. There is a small but distinct movement of young people abandoning the smoke machines, multi-purpose buildings and celebrity pastors of recent church models, and heading back towards traditional worship services, where sacraments are central, buildings are beautiful, and the liturgy has a historic rootedness about it. Gracey Olmstead, Rachel Held Evans, Aaron Niequist, Ben Irwin and Erik Parker have written illuminating articles about why young people are embracing “un-cool” church and becoming “liturgy nerds”.

What is going on?

Every person’s journey is different, but here are a few reasons why those who have grown up in evangelical churches are increasingly drawn to high church practices and historical forms of worship.

Young people today have been marketed to all their lives, and they can see past gimmicks and tricks. They don’t need church to pretend to be something it’s not – an entertainment venue, a relationship course, a nightclub. They find it refreshing to enter a building which openly proclaims itself as a worship space, to take part in ceremonies and rhythms which unashamedly focus on worship. They’ve swapped the salesman’s pitch for simple sacraments.

In an era of continuous rapid change, young people are seeking to feel grounded and connected to their past. This is why retro and vintage fashions have made such a comeback in recent years. Farmers markets, knitted scarves and cardigans, typewriter fonts, nostalgic photo effects, thick-rimmed glasses and Op Shop clothing are the new “cool”. In the midst of chaotic change and technology, there is a strong desire to be rooted and grounded in traditions of the past.

God cannot be contained in a 30 minute sermon. Or even a 45 minute one. We worship a God we cannot see, cannot truly understand, cannot adequately explain, cannot prove. Ancient forms of faith allow us to return to a sense of mystery, rather than containing God in a box made of words.

Shane Hipps points out that icons and images are replacing words as the main method of communication. This generation are deeply visual and iconic. The word-centred, book-dependent communication style of previous generations has given way to a love affair with symbols and imagery, which are far better expressed in ancient liturgies than in contemporary worship.

Sacramental worship offers a hands-on, multi sensory, participatory act of community. The simple, everyday rituals of a bath (baptism) and a meal (eucharist) are tangible and interactive, inviting God’s people to actively participate rather than passively listen.

The departure of young people from “new” churches to “old” ones can be deeply confusing to many who grew up with strict denominational boundaries. However, it has the potential to lead to healthy, restorative spaces for many of God’s people. After all, we are all one church. As Brian Zhand expresses it; “we need the whole body of Christ to properly form the body of Christ. This much I’m sure of: Orthodox mystery, Catholic beauty, Anglican liturgy, Protestant audacity, Evangelical energy, Charismatic reality — I need it all!” 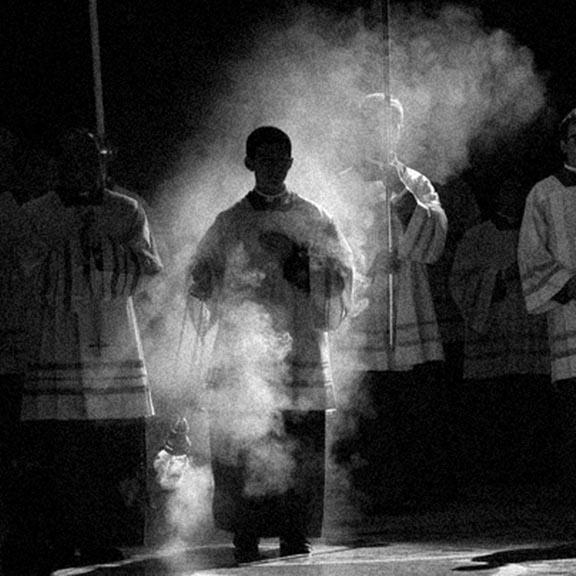 We need it all, but many get angry if worship runs past an hour becuase they have “important” things to do on Sunday.

3 posted on 04/15/2015 10:23:19 AM PDT by Bryanw92 (Sic semper tyrannis)
[ Post Reply | Private Reply | To 2 | View Replies]
To: hiho hiho
Funny timing on your post! Our church last night had a business meeting (we NEVER do those on Sundays!) and the proposal was put up to build a church. We usually meet at a ranch that has a cafeteria we use for a meeting hall. The church building that was proposed will be pretty modern with modern lighting and air conditioning and heat and a separate modern kitchen with a dining hall. But the church building itself is going to look kind of like this one:

We really don't want a 'multi-purpose warehouse' like what's popular. We want a dedicated house of worship that's intended to be a sacred space to commune with God.
4 posted on 04/15/2015 10:25:17 AM PDT by MeganC (You can ignore reality, but reality won't ignore you.)
[ Post Reply | Private Reply | To 1 | View Replies]
To: chajin

Last year our awesome traditional worship service was hijacked with awful songs many cannot sing and empty words and now we have slides that have the prayers on them (no bowing of head), some cheesy movies, etc....and we also have a contemporary service where they could well do this but forcing it on those of us who are very traditional.

Now, after finding what I wanted for years, I am not attending regular church and need to find a new one.

Funny as 30-40 year olds think like this but the 50-60 running the churches think they want entertainment!

I used to live across the street from a church that looked exactly like that one, in Lake Oswego, Oregon. It had been turned into a residence. I would like to live in a residence like that!!

That’s what ruined my old church. As the old folks died off, they were replaced by liberal college grads who had been indoctrinated in academia. They thought that the church needed ‘new blood’. Well, we got the new blood and they destroyed the place.

10 posted on 04/15/2015 10:45:13 AM PDT by MeganC (You can ignore reality, but reality won't ignore you.)
[ Post Reply | Private Reply | To 8 | View Replies]
To: hiho hiho
We unceremoniously dumped the icons, architecture and rituals that had fed the church for hundreds of years.

And that's ok.
The real thing that's needed is the Holy Spirit, the power and presence of God, and He is not in icons, architecture, or ritual.

Without knowing your historical worship practices, let me recommend that you investigate the Orthodox Church. It is always traditional, and NEVER has any of the new-agey entertainment silliness that seems to be in so many churches these days. The church I attend is a ROCOR (Russian Orthodox Church Outside Russia) church, but there are many others that might be more suitable for you. If you’re interested, send me a private message and I’ll help you find a nearby church to investigate.

Gotta say, in my church, I see absolutely no evidence that the author is right.

Since I can worship God and pray anywhere and any time, I see “going to Church” as a time to commune with other believers and to help and be helped. It’s more of a Christian community thing for me, while “worship” is a 24/7 thing.

The OCs (Original Christians) came together to worship God. They did so in secret, deep in the catacombs, the altar often being the tomb of a Christian martyr.

I think it depends on the attitudes of their locals to what they were doing. The bible clearly teaches that I can pray in my closet, or I can take communion after my evening meal at home.

We meet to study together, commune together, and “share” our Christianity. At least, it’s why I go to church.

And one cried unto another, and said, Holy, holy, holy, is the LORD of hosts: the whole earth is full of his glory. And the posts of the door moved at the voice of him that cried, and the house was filled with smoke.

“The OCs (Original Christians) came together to worship God. They did so in secret, deep in the catacombs, the altar often being the tomb of a Christian martyr.”

The OCs existed long before the catacombs...