In place of the regular Pastor's Column, we share the Paschal joy of the Hieratikon (Catechetical Sermon) of Saint John Chrysostom (ca. 400 AD).

Are there any who are devout lovers of God? Let them enjoy this beautiful bright festival!

Are there any who are grateful servants? Let them rejoice and enter into the joy of their Lord!

Are there any weary with fasting? Let them now receive their wages!

To this one He gives, and upon another He bestows. He accepts the works as He greets the endeavor. The deed He honors and the intention He commends. Let us all enter into the joy of the Lord!

First and last alike receive your reward; rich and poor, rejoice together! Sober and slothful, celebrate the day! You that have kept the fast, and you that have not, rejoice today for the Table is richly laden!

Feast royally on it, the calf is a fatted one. Let no one go away hungry. Partake, all, of the cup of faith. Enjoy all the riches of His goodness!

Let no one grieve at his poverty, for the universal kingdom has been revealed.

Let no one mourn that he has fallen again and again; for forgiveness has risen from the grave.

Let no one fear death, for the Death of our Savior has set us free. He has destroyed it by enduring it. He destroyed Hell when He descended into it. He put it into an uproar even as it tasted of His flesh.

Hell took a body, and discovered God. It took earth, and encountered Heaven. It took what it saw, and was overcome by what it did not see.

Christ is Risen, and the tomb is emptied of its dead; for Christ having risen from the dead, is become the first-fruits of those who have fallen asleep.

To Him be Glory and Power forever and ever. Amen!

Please don’t make me regret that I didn’t title this a Caucus thread.

Our priest referenced this in his homily at the Vigil last night :-)
Kind of neat to see it again this morning, thanks for posting!

This sermon is recited at the midnight Divine Liturgy on Pascha in every Orthodox church on earth and has been for over 1000 years. Where your translation says Hell “was in an uproar”, the Greek actually says “It was vexed”. Each time the priest says this, the people roar back “IT WAS VEXED”.

A Blessed Easter to all you Westerners!

Looking forward to hearing this again next Sunday. 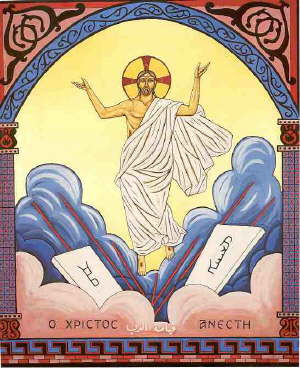 He is Risen! Truly Risen!

A blessed Eastertide to all!

He is Risen! Alleluia!

If anyone doesn't know, The Other Easter will be next Sunday, April 12 (Gregorian) or March 30 (Julian, the calendar on which this dating is based). Sometimes "both Easters" fall on the same day, but by now they can fall up to five weeks apart, thanks to at least two differences between the methods.

In other words, for a lot of people today is Palm Sunday.