Miguel Pro and the other Mexican martyrs provided millions of people with inspiration to resist the most anti-Catholic government ever seen in the Americas.

On Nov. 22, 1927, a man dressed in street clothes was led through a crowd of photographers and politicians on his way to a firing squad in Mexico City. The photographers were present for this illegal execution — there had been no trial or even formal charges — because the Mexican president, Plutarco Elias Calles, the most rabidly anti-Catholic leader in the world at the time, wanted them to record the humiliation of a man desperately pleading for his own life. Calles badly miscalculated. The man walked calmly to the place of his death, asked to be allowed to pray, and then, in a voice neither defiant nor desperate, intoned the words Viva Cristo Rey! — "Long Live Christ the King!"

But Pro was hardly alone. Thousands of Catholics died in the same anti-Catholic wave, though few people anywhere, especially in the United States, remember their martyrdom today. President Calles was not only wrong about how Pro would die, he was wrong about Mexico as a whole. Though anti-clerical propaganda long tried to portray the Mexican clergy as corrupt, few of them, few enough to count on one hand, renounced the Faith or caved in to government pressures, even facing death. They all showed a heroic faith so deep that many, like Christ, calmly forgave their executioners before they died.

Americans who go to Mexico today rightly think of it as among the most Catholic nations on earth. Churches and religious festivals are everywhere. Most Mexicans are deeply devout and specially attached to Our Lady of Guadalupe. It is hard to believe that for several decades the Mexican people were subjected to religious outrages equal to anything that even Communism and Nazism perpetrated.

In fact, President Calles admired both the Communists and Hitler. However foolish it might seem from the outside to outlaw Catholicism in a country like Mexico, he banned Masses, expelled the whole Mexican hierarchy, and ordered massacres of simple believers who frequented churches in the absence of the clergy. The governor of the state of Tabasco, Tomas Garrido Canabal was so fanatical in his hatred of the Church that he named his children Lenin, Lucifer, and Satan. We get a good sense of what it was like for Catholics under Canabal’s reign of terror in Tabasco in Catholic novelist Graham Greene’s The Power and the Glory. Greene had visited Mexico and seen the situation first-hand.

Father Pro, then, knew very well what he was risking when, operating underground, he continued saying Mass, hearing confessions, and running "Communion stations" around Mexico City. Thousands came secretly to the sacraments. By a providential combination of circumstances, he was the perfect man for the job. As a young boy he had always loved plays and practical jokes. His natural talents as an actor served him well when he had to deceive the police.

Pro would dress up as a dapper young man when he spoke with women’s groups; the police didn’t expect a priest to be so stylish. If he was visiting car mechanics or drivers, he put on overalls. In one case, he was bringing the Blessed Sacrament to a house where plainclothes detectives were waiting outside. Not wishing to give them the satisfaction of stopping him, he pretended to flash an officer’s badge. The detectives saluted him as he left the house, mission accomplished.

Like many other martyrs, even in jail Pro ministered heroically to the other prisoners. He led them in prayers and songs and kept up everyone’s spirits. The night before he died, he gave his mattress to a sick prisoner while he himself slept on the cell floor.

When Pro’s body, along with his brother Humberto’s, who had also been executed, was taken back to his father’s house, the elder Pro showed the kind of family the Jesuit had sprung from. He ordered no one to mourn, because, he said, there was nothing sorrowful in such heroic deaths. Though the Mexican government had forbidden any public demonstrations, 20,000 ordinary Mexicans crowded into the streets outside the Pro’s home for the funeral.

Miguel Pro and the other Mexican martyrs provided millions of people with inspiration to resist the most anti-Catholic government ever seen in the Americas. Probably 300,000 Mexicans died in the process. Catholicism would probably have survived underground, as it did in the Soviet Union, whatever the government did. But Father Pro and his fellow martyrs gave Mexico and the rest of the world an example of what it means to follow Christ the King against all the princes of this world.

Published by permission of Robert Royal and the Arlington Catholic Herald.

Is a similar anti-Catholic government happening in the United States?

2 posted on 11/22/2012 7:51:19 PM PST by Salvation ("With God all things are possible." Matthew 19:26)
[ Post Reply | Private Reply | To 1 | View Replies]
To: All
Father Pro: A Mexican Hero
The Cristeros and Us (George Weigel)
Movie on Cristeros War Exposes Mexican Govt.'s Anti-Christian Campaign
The Story, Martyrs, and Lessons of the Cristero War
When the Catholic Faith Was Outlawed

4 posted on 11/22/2012 8:01:19 PM PST by LisaFab
[ Post Reply | Private Reply | To 3 | View Replies]
To: Salvation
The governor of the state of Tabasco, Tomas Garrido Canabal was so fanatical in his hatred of the Church that he named his children Lenin, Lucifer, and Satan.

Wow. Hard to tell if hated the church or his kids more! Good grief...I cannot imagine standing in this guy's shoes on the day he met the Lord face to face.

Very interesting story. Learned something new today, I had never heard of this.

I have the DVD but haven't had the chance to watch it yet. It deals with the persecution of Christians in Mexico and the people who fought back......

Optional Memorial
November 23rd
[In the diocese of the United States]

(1891-1927) Miguel, one of eleven children, was born in Guadalupe, Mexico. He was ordained a Jesuit priest in 1925 in Belgium, having been forced to flee Mexico because of religious persecution. He returned the next year to minister to his native people. He had a great love for the Mass, devotion to Our Lady of Guadalupe, and apostolic zeal for ordinary working men. Despite the fierce persecution of the Mexican Government as well as his own debilitating illnesses, Fr. Pro continued his ministry to the faithful. He was captured, imprisoned and martyred for his Catholic Faith in 1927 under charges of sedition.

Collect:
Our God and Father,
who conferred upon your servant Blessed Miguel Agustin Pro
the grace of ardently seeking your greater glory and the salvation of others,
grant, through his intercession and example,
that by faithfully and joyfully performing our daily duties
and effectively assisting those around us,
we may serve you with zeal
and ever seek your glory.
Through our Lord Jesus Christ, your Son,
who lives and reigns with you in the unity of the Holy Spirit,
one God, for ever and ever. +Amen.

First Reading: 1 Peter 5:1-4
So I exhort the elders among you, as a fellow elder and a witness of the sufferings of Christ as well as a partaker in the glory that is to be revealed. Tend the flock of God that is your charge, not by constraint but willingly, not for shameful gain but eagerly, not as domineering over those in your charge but being examples to the flock. And when the chief Shepherd is manifested you will obtain the unfading crown of glory.

Gospel Reading: Matthew 16:13-19
Now when Jesus came into the district of Caesarea Philippi, He asked His disciples, "Who do men say that the Son of man is?" And they said, "Some say John the Baptist, others say Elijah, and others Jeremiah or one of the prophets." He said to them, "But who do you say that I am?" Simon Peter replied, "You are the Christ, the Son of the living God." And Jesus answered him, "Blessed are you, Simon Bar-Jona! For flesh and blood has not revealed this to you, but My Father who is in heaven. And I tell you, you are Peter, and on this rock I will build My church, and the powers of death shall not prevail against it. I will give you the keys of the kingdom of heaven, and whatever you bind on earth shall be bound in heaven, and whatever you loose on earth shall be loosed in heaven." 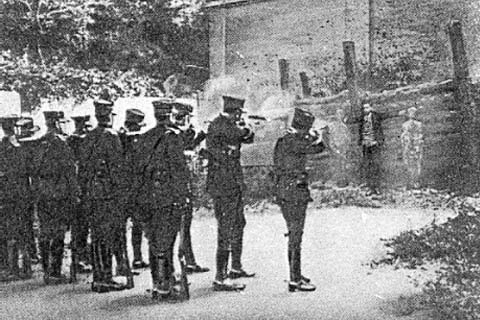 The executioners wanted to be sure that the word got out of the fate of Fr. Pro so they invited the media and photographers to witness the event. It was meant to be a warning to others, but had the opposite effect. It merely helped to stiffen the resistance to the crackdown. Father Pro knelt to pray and to forgive those who were about to execute him.

With a rosary in his hand he exclaimed "Viva Cristo Rey" (Long live Christ the King) as the firing squad executed him for being a Catholic priest and serving his flock.

10 posted on 11/23/2012 2:58:20 PM PST by Salvation ("With God all things are possible." Matthew 19:26)
[ Post Reply | Private Reply | To 9 | View Replies]
To: Salvation
The wall, apparently, had cutout targets in the shape of a human. As Fr. Pro assumed the position on his imaginary cross the two targets flanked him as the two robbers flanked Christ.

Let us not forget to thank Christ for his glorious martyrs.

They were stoned, they were cut asunder, they were tempted, they were put to death by the sword, they wandered about in sheepskins, in goatskins, being in want, distressed, afflicted: [38] Of whom the world was not worthy; wandering in deserts, in mountains, and in dens, and in caves of the earth. [39] And all these being approved by the testimony of faith, received not the promise; [40] God providing some better thing for us, that they should not be perfected without us. [1] And therefore we also having so great a cloud of witnesses over our head, laying aside every weight and sin which surrounds us, let us run by patience to the fight proposed to us: [2] Looking on Jesus, the author and finisher of faith, who having joy set before him, endured the cross, despising the shame, and now sitteth on the right hand of the throne of God. (Hebrews 11-12)