The mood was appropriately solemn, the faithful quiet and orderly in their movements.

Fragrant myrrh filled the air. The encounters with the centers of attraction were quick, but the reactions were indelible. Some came away shaken and streaming tears. A few talked of a wave of peace and calm coming over them. Others described a sense of divine providence.

In uncertain times, people want something, anything, to believe in. The spiritually inclined often look to the heavens for answers, and when they get what they think is a sign, they embrace it wholeheartedly.

For the past 17 weeks, St. George's Orthodox Greek Catholic Church in Taylor has been hosting services centered on two icons of the Blessed Mother of the Theotokos. The faithful believe the icons seep myrrh, a heavily perfumed oil, for reasons St. George's officials are leaving unexplained.

The church has sought no publicity for the services, but each week, entirely through word of mouth, standing-room-only crowds are turning up to venerate the icons.

The icons reportedly came into contact with the myrrh-streaming Iveron Icon of the Mother of God from Hawaii, which traveled to local Orthodox churches, including St. George's, back in the fall. Many in the Orthodox faith believe the Iveron Icon possesses healing powers for those who pray to it.

"Miraculous icons are a normal part of orthodoxy," said Father Sergius, the abbot at the Monastery of St. Tikhon of Zadonsk in South Canaan Twp., where the Iveron Icon also made an appearance. "We have one here that weeps on and off, but it's not a constant thing."

They are serving toasted cheese sandwiches (with an image of the virgin Mary on it) after each service. (20 bucks each, tax deductible).

“.......Blessed are those who have not seen and yet have believed.”

Blessed are those who have not seen a virgin Mary cheese sandwich or smelled Iveron Icon myrrh and yet have believed.”

Idol worship is not Christianity.

Praying to anyone but God through Jesus is not Christianity.

Just the way it is.

An idol is not necessarily an image of Jesus or his mother, though.

6 posted on 02/14/2012 9:12:58 AM PST by marshmallow (.)
[ Post Reply | Private Reply | To 4 | View Replies]
To: marshmallow
I took these cell phone photos of a full size image of the Divine Mercy at the Divine Mercy Shrine in Stockbridge MA back in 2010. The image belonged to a woman in California, and she gave it to the Marian Fathers after it started "weeping." It now hangs in a hallway in the administrative offices. The Marian Fathers have not made any statements about it to my knowledge: 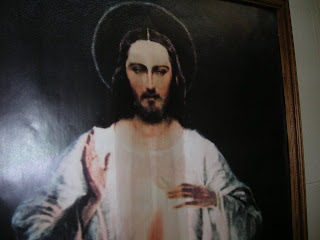 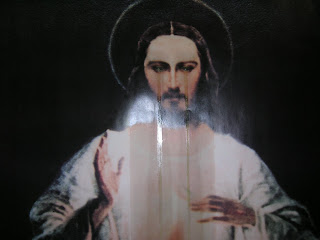 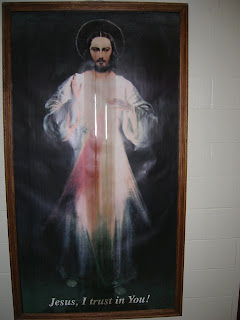 Generally the Greek Orthodox Church frowns on this given how often these scan be scientifically explained.

Also there is a whole explanation how icons are not “worshiped” rather reminders of the real person they represent.

Think along the lines of Christians do not worship wood because it is shapped like a letter t. Rather it reminds us of the deed and the person behind the symbol.

8 posted on 02/14/2012 9:52:13 AM PST by longtermmemmory (VOTE! http://www.senate.gov and http://www.house.gov)
[ Post Reply | Private Reply | To 1 | View Replies]
To: longtermmemmory
Also there is a whole explanation how icons are not “worshiped” rather reminders of the real person they represent.

That's a nice summary of the Orthodox position.

——A few talked of a wave of peace and calm coming over them.——

I can understand this better now. A couple of months ago I went to a healing service with Fr. Aniello. Toward the end of the service we lined up along the altar. As Fr. Aniello came to each person, he held their hands and simply said, “It’s just you and Jesus.”

Each person fell back serenely, was caught, and laid on the floor for several minutes.

As my turn came, I thought profound thoughts like, “I’m the only one this won’t happen to. This is going to be embarrassing.” As I was worrying, he held my hands, and a wave of peace came over me. It felt like a megadose of Valium. I was so relaxed, that I didn’t worry about falling over backwards. I was fully conscious, but so relaxed that I didn’t move at all for several minutes.

This happened with everyone. And everyone who was laid out looked like a corpse. Needless to say, I’d never experienced anything like it.

The experience is a great comfort to me. I am certain that God exists, but it is a wonderful consolation to experience a sliver of God directly.

Hey, a reasonable explanation is worth a shot.

But somedays I just feel like saying, “Oh, forget it.”

If the Catholic Church certifies this as a miracle, then the news for us isn’t very good.

Myrrh, while smelling nice, and being even more valuable than gold back in the time of Jesus, was used as an embalming agent.

In fact, some Bible scholars have analyzed the meaning of the three gifts - gold, frankensence, and myrrh - the myrrh being a foretelling us his death, the other two being gifts fit for a king.

I’m not shocked at all to hear that miracles are going to begin to occur. I wouldn’t be surprised to find people start having strange and identical dreams either.

Crying embalming fluid, to me, is more frightening than statues weeping blood, for example.

there are easy ways to fake such “weeping”

It is a parlor trick.

The relics of ST. Nicholas, currently in Italy, have produced myrrh for over 1000 years.

Indeed myrrh can be seen as a sign of resurrection, not death or burial. On the morning of the first Easter, the women were carrying myrrh to the tomb when they heard the news of the resurrection from the Angel. Indeed, in Orthodoxy, we call them, "The myrrh bearing women."

I recently spoke with a monk who has seen this particular icon and touched the myrrh. He told me there was so much myrrh it went through the glass covering the icon. He also told me that in the past a small tray was placed under the icon to catch the myrrh. The flow stopped until the tray was removed.

Amazing. Thanks for your take on it. I actually feel a bit better.

I had never heard of icons or statues weeping myrrh until today.

The Blessed Mother IS Theotokos. It’s Greek for “God-Bearer.”

If you look just about half-way down my profile page, there's a picture of a charcoal and graphite crucifixion sketch I did a few years ago.

As you'll note it's completely monochromatic. I did it on a small peice of drawing paper, which I keep propped up against a radio on my night stand. A few months ago I snapped a picture of it on my phone to send to a friend. When I looked at the image on my phone it looked like this:

Being intimately familiar with the drawing, from the time I first rendered it, and looking at it every day and night, I was initially stunned by the obvious reddish tint around the wound in the side. For a few moments it gave me pause, and made me reflect on the sufferings of Christ. Then, I looked about and noted that the red was merely the result of how the reading lamp above the drawing was reflecting off a red candle in the foreground, and then bouncing against the silvery charcoal in that area of the drawing.

Certainly not a capital "M" "Miracle" in the traditional understanding of the word, but in my mind, no less an indicator of how God is present, and at work, in the very smallest aspects of our lives and activities.

I do wish you would post these under a Caucus thread. It helps prevent the Christian-bashing hit-and-run trolls.