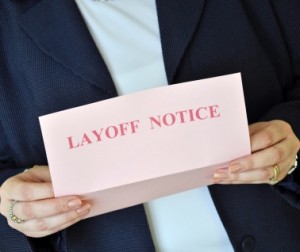 A man must always be ready,
for death comes when and where God wills it.
(St. John Neumann)

Several weeks ago, an email was sent from the president of our company.  He spoke of the need for a reduction in staff and informed us that a layoff would take place on or before a certain date.  Immediately upon receiving this email, people began to do one or more of the following:

As the time grew closer, I began to prepare.  Eventually, we reached the final day.  We were informed that those affected would be summoned beginning at 9 AM.  Like everyone else in the company, I sat at my desk and waited for my manager to appear.  Although I prayed for acceptance of God’s will, I would lapse in and out of worrying as I watched several of my coworkers being escorted to the door.  Despite the tension, I was comforted with the thought that I was prepared.  My desk was cleaned out, I exchanged business cards with several friends and final emails were sent.  Approximately 90 minutes into the process, my manager appeared at my desk and asked me to come to his office.  Fifteen minutes later I was being escorted out the door and my 15 year career at the company had come to an end.

In many ways, the layoff process is similar to death.  We all know that it’s coming, but we don’t know when.  Any day could be our last.  Although we know that death is inevitable and most know that they will be judged, people prepare in different ways.  Some worry, others ignore it, and some prepare by trying to lead a good life and/or repenting from sinful behavior.  One thing is for certain, once death comes, the time for amending our lives is over.  According to the Catechism of the Catholic Church (CCC):

Death puts an end to human life as the time open to either accepting or rejecting the divine grace manifested in Christ.  The New Testament speaks of judgment primarily in its aspect of the final encounter with Christ in his second coming, but also repeatedly affirms that each will be rewarded immediately after death in accordance with his works and faith.  The parable of the poor man Lazarus and the words of Christ on the cross to the good thief, as well as other New Testament texts speak of a final destiny of the soul–a destiny which can be different for some and for others.  Each man receives his eternal retribution in his immortal soul at the very moment of his death, in a particular judgment that refers his life to Christ: either entrance into the blessedness of heaven-through a purification or immediately, — or immediate and everlasting damnation. (CCC 1021-1022)

In his book the Imitation of Christ, Thomas a Kempis offers some profound advice:

How dull we are and hard of heart, for we think only of the present and make little provision for the life hereafter!  If you were wise, you would so order your life as though you were to die before the day is over…In the morning think that you may not live till night; and when night comes, do not be sure that you will live till tomorrow.  Therefore always be ready, and so live that you will not have an unprovided death. (Chapter 23, Meditation on Death)

At my former company, people questioned the president’s logic of sending the email announcing the layoff in advance.  For some, their Christmas was ruined because they spent the time worrying.  For the vast majority, however, they used the notice to prepare for the reality of the event.  Each of us will die one day and be judged for how we lived our lives.  The results of that judgment will determine whether we spend eternity in heaven or hell.  Changing our lives now can definitely help us to achieve the former.  Why not take advantage of the warning and prepare?

“Beware that your hearts do not become drowsy from carousing and drunkenness and the anxieties of daily life, and that day catch you by surprise like a trap.  For that day will assault everyone who lives on the face of the earth.  Be vigilant at all times and pray that you have the strength to escape the tribulations that are imminent and to stand before the Son of Man.” (Luke 21:34-36)

Gary Zimak is the founder of Following The Truth Ministries (http://www.followingthetruth.com), a lay apostolate created to assist Catholics in learning more about their Faith. He is a regular guest on EWTN Radio’s “Son Rise Morning Show”, Ave Maria Radio’s “Catholic Connection with Teresa Tomeo” and appears frequently on several other Catholic radio programs.  In addition to writing for CatholicLane. Mr. Zimak hosts a daily program on BlogTalkRadio and posts frequently on his blog, Facebook and Twitter.  He is a member of Catholics United For The Faith and the Knights of Columbus and resides in New Jersey.

I experienced a layoff after almost 20 years with one company and have lost two more jobs in the past year - one to a business that was bought out and the other to a disagreement with management.

So, I’m an unwitting pro at going through layoffs and I can tell you now that death will be sweeter. After layoffs, I have the insecurity of not knowing how far my savings are going to take me and how long it will be before I can cash a payroll check again. Plus, those COBRA payments are huge dent in your living expenses.

In death, I have the best insurance and retirement package ever. Oh, sure. All my treasures on earth will become instantly worthless to me but I will be getting new imperishable treasures, a new imperishable body, new and better relationships plus a loss of anxiety and fear for my future.

So many people have been layed off and not gotten through it as well as you.

Prayers for all the unemployed and under-employed.

I have a job interview for Thursday that I hope will end my current drought. Your prayers are appreciated.

Paul tells us we are in the age of grace and explained the mystery of the church. Now is the time to accept the free gift. We who are watching have an intimate relationship with The Lord Jesus Christ. We have left the world system behind.
What do you have if you remove Paul’s writings from the Bible. Does not Israel take center stage? This age of grace is about to end at any minute with the rapture of the church. God’s program will next focus on Israel, the 7 year tribulation.