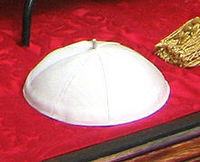 Spain’s bureaucratic health care system almost killed Madrid resident Carlos Vazquez, a Crohn’s disease sufferer. But contact with John Paul II’s white papal cap miraculously cured him in 2006, author Randall Meissen relates in “Living Miracles: The Spiritual Sons of John Paul the Great” (Mission Network: Alpharetta, GA, 2011). John Paul will be beatified on May 1 due to a French nun's cure from Parkinson's, but a second miracle is needed before declaring him a saint.

Carlos Vazquez experienced constant pain and severe weight loss during his struggle with Crohn’s disease, a supposedly incurable autoimmune disorder causing inflammation of the digestive tract. By September of 2006, after dropping to eighty-four pounds, his situation was life threatening. Nonetheless, Vazquez was repeatedly turned away by Spain’s public health system due to bureaucratic technicalities.

A friend of Carlos Vazquez's family lent him a relic of John Paul II, one of the pope's white papal skull caps, and suggested he pray to the pope for a miracle. The cap, properly called a zucchetto, was placed in the Vazquez living room; thereafter, Vazquez and wife prayed daily for aid from the deceased pope.

On the night of November 14, 2006, Vazquez went to bed, suffering from his usual abdominal pain and unable to eat solid food. That night, he dreamt about John Paul II, and the next morning awoke, free of pain and with restored energy.

Stunned by the change, Vazquez called his doctor, who insisted that a cure was impossible and that he should not risk eating solid food. Vazquez ignored that advice and went out to eat in celebration on the evening of Nov. 15. As he downed a steak dinner, an espresso, and a few shots of liquor, his relatives started shouting, “It’s a miracle. It’s a miracle.”

“I don’t know if this type of healing will receive official recognition,” says book author Randall Meissen, “but it can’t hurt to praise God in face of such a cure.”

Some Christian groups frown on the practice of keeping relics, but for Catholics, objects that came in contact with a saint or blessed (like John Paul’s hat) are considered second class relics. First class relics are limited to the actual remains of a saint or blessed, commonly fragments of bones.

Controversy and charges of sacrilege have erupted in the past when relics have surfaced on Ebay or in public auctions. The sale of relics is strictly forbidden by Catholic Canon Law (canon n. 1190).

“Sure, there can be misuses of relics,” says Meissen, “but the use of relics has a basis in the Bible. Christians who scoff at relics turn a blind eye to passages of scripture.” According to the Bible, a dead man came to life after touching the bones of the prophet Elisha (2 Kings 13:20-21), Christ’s cloak once occasioned a cure (Matt. 9:20-22), as did St. Peter’s shadow (Acts of the Apostles 5:15-16) and cloths that touched St. Paul (Acts of the Apostles 19:11-12).

As for John Paul II’s papal hats, they are not in short supply. He commonly gave them away as gifts. The Shrine of Our Lady of Czestochowa in Doylestown, PA, has one on display, as does Father Gary Dailey, pastor at University of Massachusetts Catholic Newman Center in Amherst.

“Together with my chalice, it is my prized possession,” says Father Dailey. “I was convinced back in 1987 when I met him that this man was going to be a saint; I knew I had just touched a saint.”

About the book:
Living Miracles: The Spiritual Sons of John Paul the Great is available on Amazon.com.

Author Randall J. Meissen, LC, former professor at Legion of Christ College in Cheshire, Connecticut, currently works in youth ministry in Valencia, Spain. He podcasts on John Paul 2 at JohnPaulMoments.com and can be contacted at rmeissen(at)johnpaulmoments(dot)com.

The title of this news article is poorly worded. The story, on the other hand, is very powerful. Looking forward to JPII's beatification.

which is why you don’t belong on the Catholic Caucus.

“And God did extraordinary miracles by the hands of Paul, so that handkerchiefs or aprons were carried away from his body to the sick, and diseases left them and the evil spirits came out of them” (Acts 19:11-12).

Excellent story. I am so looking forward to the beatification. We’ll find out in the next day or two whether our parish will hold a celebration. If not, we’ll host one at home.

Probably not, because Crohn's Disease is diagnosed symptomatically, rather than with specific physical pathology. There would not be the type of visible before-and-after medical records that are involved in authenticating a miraculous healing "for publication" as it were. Nonetheless, the man's restored health is an inspiring testimony to his faith and love.

The guy whose comment has now been removed by the moderator on why JPII’s hat could not cure himself of his ailment, is like the thief who cursed the Christ for not being able to come down from the cross and heal them all. Relics have their “spiritual and physical power” precisely because they come from someone who lived and died for Christ. Sainthood by the Church is simply an external act of affirmation that the deceased man or woman is in paradise.

I’m EO, not RC. Even I know the headline should be “Spanish man healed by God after touching JPII’s ‘hat’.” I would replace “hat” with whatever that thing is called.

Saying he was cured by JPII’s hat is not just a bad headline, it’s heretical by RC standards. It will make Prots think all the wrong dumb things they have been taught about RCs (and EOs, or that matter) are true.

This will be a day of incredible blessings. In the Maronite Catholic Church, the Sunday following Easter is referred to as "New Sunday" and follows the week of "wearing white". The newly baptized wore their white "baptismal" clothes for the entire week. In the Maronite Church, New Sunday ends the week of "appearances" where our Lord appeared to the two disciples on the Road to Emmaus and other appearances made immediately following His resurrection. In our parish, May 1, this year, will be May Crowning of the Blessed Mother and the administration of First Communion to 7 children - the largest number we have ever had in the 106 year history of our parish.

I will be up early to follow the LIVE transmission of JPII's beatification from Rome and then dash off to church for this beautiful ceremony. In the afternoon, I will tune in to EWTN to watch LIVE coverage from the National Shrine of the Divine Mercy in Stockbridge MA as they pray the Divine Mercy chaplet.

Congratulations on the growth of your parish. I’m sure it will be a wonderful day for you.

I haven’t seen our liturgy schedule yet, but hopefully we’ll be observing Divine Mercy Sunday with our Spanish congregation and then having a whoop-up for dear Pope John Paul. Tom is requesting sushi, but that’s just nuts. Well, fish, but I suppose we could have Polish pastry, at least.

ok, I’m Catholic and living in Pope JPII’s homeland (I’m not Polish though) — there is a bit too much about the Pope’s rise to sainthood. I believe he is a saint and a great model for the faith — especially in his last years when you see a sick and physically tired Pope walking on (and I truly believe that in the last years it was Jesus carrying the Pope), but this is too much hoopla, imho (feel free to disagree with me civilly and I’m ready to admit I’m wrong — fellow Catholic and other Christian brethern)

I’m sure the excitement in Poland seems excessive to someone who isn’t Polish, and even to some who are. Personally, I find the passions of Eastern Europeans to be practically incomprehensible. My ancestors left all that baggage behind when they came to the U.S. ... as witnessed by the two granddaughters (my cousin Karen and me) of a card-carrying Orangeman’s becoming Catholic!

However, I would rather have North Carolina going ballistic over the beatification of Pope John Paul than over the idiotic basketball tournament. There seems to be a very common human need to attach one’s identity to something outside oneself ... but some objects of enthusiasm are just plain more worthy than others.

"Caucus threads are closed to any poster who is not a member of the caucus.

For instance, if it says “Catholic Caucus” and you are not Catholic, do not post to the thread. However, if the poster of the caucus invites you, I will not boot you from the thread.

The “caucus” article and posts must not compare beliefs or speak in behalf of a belief outside the caucus."

You're welcome to your beliefs but if you don't like the rules you are welcome to argue with the Religion Moderator.