On Ash Wednesday I learned that a former employee sent a three-page letter to several bishops accusing me of everything from drug addiction to multiple sexual exploits with her and several other adult women.

There seems to no longer be the need for a complaint to be deemed "credible" in order for Church authorities to pull the trigger on the Church's procedure, which was in recent years crafted to respond to cases of the sexual abuse of minors. I am not accused of that...[but] I have been placed on "administrative leave"...I'll certainly cooperate with the process, but personally believe that it is seriously flawed, and is tantamount to treating the priest as guilty "just in case"...The resultant damage to the accused is immediate, irreparable, and serious, especially for someone like myself, since I am so well known. I am not alone in this assessment, as multiple canon lawyers...civil and criminal attorneys [agree]...All of the allegations in the complaint are false, and I ask you to pray for all concerned. — Fr. John Corapi, SOLT, 3-18-11

Father Thomas Euteneuer has performed a valuable service in giving us...Exorcism and the Church Militant. Everyone...can profit from a careful and prayerful reading of this book. Priests especially should profit from this material [as] preparation for this dimension of spiritual warfare is singularly lacking in almost all seminaries, novitiates, or other Catholic institutions of learning. One of the reasons for this is that many such institutions have faculty that...don't necessarily believe what the Church believes. This leaves a terrible void...Hopefully this fine book will inspire many priests to equip themselves with the necessary weapons to fight for souls in this arena. — Rev. John A. Corapi, SOLT, STD, excerpt from the Foreword, Exorcism and the Church Militant 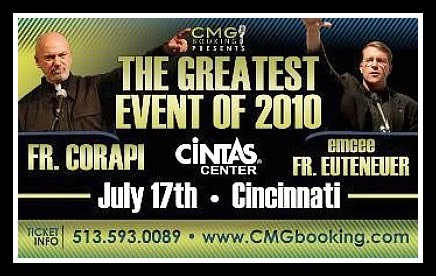 he got burned on ash wednesday... a rather wry occurrence.

what a pity when a church organization opens itself up to suspicions which aren’t true even by accident because of its loose policies in the past. i hope there is clear evidence showing the woman is fabricating the story, if she is. i wonder if she is mentally delusional? or irrationally bitter about something? although greed could do the trick (the love of money is a root of all sorts of evil).

I was familiar with Fr. Euteneur because of his position running HLI. I didn’t know about Fr. Corapi until this scandal broke and was posted here.

It seems to me that this article is ENTIRELY speculative. The only interesting point is that Fr. Corapi was Fr. Euteneur’s spiritual director.

It says that he ceased being his director after a recent visit, when Fr. Euteneur may have revealed his sins. It is hardly surprising that Fr. Corapi would say nothing about that, if Fr. Euteneur confessed to him—for the obvious reason of the seal of the confessional.

Anything told him in confession is entirely confidential and cannot be made public. Period.

So, I really don’t see how this has any bearing on Fr. Corapi’s guilt or innocence. On the other hand, we apparently have a vindictive woman who, after she was fired, told people that she would “get” Fr. Corapi.

Let’s just see what the investigation turns up, and in the meantime pray for Fr. Corapi.

Color me unimpressed, and rather disgusted. This is not only a fluff piece, but it takes a page from the “Last Temptation of Christ” handbook: take an incomplete story, akin to a white sheet with holes, and fill it in with black.

Scurrilous nonsense, especially in the face of a paucity of evidence against Father Corapi; it’d be more at home in the cutting room of Oliver Stone.

(I also notice that the author has a consistent aversion to calling the two priests by their proper title: “Father”; what’s with the “JC” and “TE” nonsense?)

Does this mean that anybody recognizing his positive work is somehow “complicit” in any other aspect of his behavior?

I think it’s mistake for anyone to write openly in such a speculative manner about such a serious matter-—it could be bordering on rash judgment.

Some writers on RenewAmerica tend to specialize in gossip and innnuendo. RA has no editorial oversight, apparently.

10 posted on 03/27/2011 2:05:04 PM PDT by Houghton M.
[ Post Reply | Private Reply | To 9 | View Replies]
To: marshmallow
"Finally, although Corapi says he will condescend to go along with his forced "administrative leave," his defiant tone makes his parting warning, that these accusations will cause him "immediate, irreparable, and serious...harm" sound more like the beginnings of a self-righteous lawsuit than a sermon written to save men's souls."

Fr. Corapi's statement wasn't MEANT to be a sermon, so I don't know what this man is talking about. The entire piece is extremely snarky and condescending.

I have no idea if Fr. Corapi is guilty of anything, or not, but he IS right in that the Bishops have gotten way TOO strident, in a effort to not look as thought they're hiding anything. They are, in effect, shooting first, and asking questions later, and some good priests, who are completely innocent, are having their reputations damaged.