We continue our Patristic Rosary Project today with:

Commenting on Luke 1:39-45, the when Mary journeys to visit her cousin Elizabeth, St. Augustine of Hippo (+430) speaks of the infant John, to be known as the Baptist, leaping in the womb at the sound of Mary’s voice:

We see instances of leaping no only in children but even in animals, although certainly not for any faith or religion of rational recognition of someone coming.  But this case stands out as utterly uncommon and new, because it tool place in the womb, and at the coming of her who was to bring forth the Savior of mankind.  Therefore this leaping, this greeting, so to speak, offered to the mother of the Lord is miraculous.  It is to be reckoned among the great signs.  It was not effected by human means by the infant, but by divine means in the infant, as miracles are usually wrought. [ep 187.23]

God wrought something in John at that moment.  What happened?  We can look to the Greek writer Origen (+ c.254) for his view:

The concept of being "filled with the Holy Spirit" is rather interestings.  Perhaps some of you have heard of the glosses on this phrase which compare the Blessed Virgin, John the Baptist, and St. Stephen.  All were said to be filled with the Holy Spirit.  Mary was prevented from ever having any stain of original sin.  John was said to have been forgiven the guilt of original sin before his birth, which is the moment he leapt in the womb at the coming of the Lord.  Stephen, the Protodeacon, was also "filled with the Holy Spirit", but after his birth.  In any event, the always creative and interesting Origen speaks of John’s sanctification in the womb at the coming of Mary who was bearing the Son of God.

Each of us must prepare to bear Christ and be filled with the Holy Spirit.  St. Ambrose, the bishop of Milan (+397) said:

You see that Mary did not doubt, but believed and therefore obtained the fruit of faith.  "Blessed … are you who have believed."  But you also are blessed who have heard and believed.  For a soul that has believed has both conceived and bears the Word of God and declares His works.  Let the soul of Mary be in each of you, so that it magnifies the Lord.  Let the spirit of Mary be in each of you, so that it rejoices in God.  She is the one mother of Christ according to the flesh, yet Christ is the Fruit of all according to faith.  Every soul receives the Word of God, provided that, undefiled and unstained by vices, it guards its purity with inviolate modesty.  [Exposition of the Gospel of Luke 2.26]

Our baptism should remind us every day that we are deeply woven into the fabric of the Church, a Church which in many ways can said to stretch back into the depths of our great "Family History"  as God’s People.  In a comment on the Magnificat, which Mary pronounced during her mysterious Visitation, Venerable Bede (+735) says:

When blessed Mary was making mention of the memory of the fathers, she properly represented them by naming Abraham in particular.  Although many of the fathers and holy ones mystically brought forward testimony of the Lord’s incarnation, it was to Abraham that the hidden mysteries of this same Lord’s incarnation and of our redemption were first clearly predicted.  Also, to him it was specifically said, "And in you all the tribes of the earth witll be blessed." (Gen 12:3)  None of the faithful doubts that this pertains to the Lord and Savior, who in order to give us an everlasting blessing deigned to come to us from the stock of Abraham.  However, "the seed of Abraham" does not refer only to those chosen ones who were brought forth physically from Abraham’s lineage, but also to us…. Having been gathered together to Christ from the nations, we are connected by the fellowship of faith to the fathers, from whom we are far separated by the origin of our fleshly bloodline.  We too are the seed and children of Abraham since we are reborn by the sacraments of our Redeemer, who assumed his flesh from the race of Abraham.  [Homilies on the Gospels 1.4]

Did you catch that great phrase?  "Mary was making mention of the memory of the fathers…"  Perhaps we can see how the Blessed Virgin is a good model for all patristicists and, of course, patristibloggers!

2 posted on 10/02/2010 3:57:35 AM PDT by markomalley (Extra Ecclesiam nulla salus)
[ Post Reply | Private Reply | To 1 | View Replies]
To: markomalley; OpusatFR; Salvation; Kolokotronis; kosta50; MarkBsnr; Mad Dawg; stfassisi
Here is a very uncommon style of icon of the Visitation from a church in Cyprus. Its from the 14th century and shows Christ in the womb of the Theotokos and +John the Forerunner in +Elizabeth's. Notice how Christ is blessing His cousin and +John is bowing: 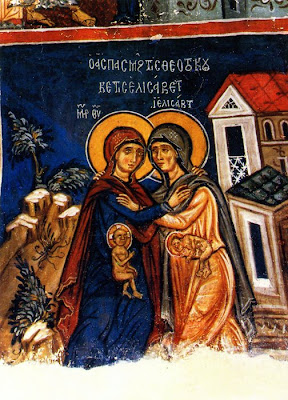 Theotokos Virgin, rejoice, Mary full of grace, the Lord is with you. Blessed are you among women, and blessed is the fruit of your womb, for you have borne the Saviour of our souls.
3 posted on 10/02/2010 5:22:29 AM PDT by Kolokotronis (Christ is Risen, and you, o death, are annihilated!)
[ Post Reply | Private Reply | To 2 | View Replies]
To: Kolokotronis; markomalley

Every time that I think that I am progressing in understanding of the Faith, there is yet another proof of how far it is that I have to go. Thank you dear sirs for all that you continue to do for the cause of Christ.

Amen to all of you!