St. John Vianney, the Curé of Ars, spent his whole ministry as the pastor of the small parish at Ars in France. He was known for his sanctity in his own lifetime, he performed many miracles, and he could read souls. Having died in 1859 at the age of 73, he was declared venerable within fifteen years by Pope Pius IX in 1874. Pope St. Pius X beatified him and recommended him as a model to parochial clergy in 1905; Pope Pius XI canonized him in 1925 and made him the Patron of Parish Priests in 1929. He was the subject of an encyclical by Pope John XXIII in 1959 ( Sacerdotii Nostri Primordia), and he was the subject of Pope John Paul II’s Holy Thursday Letter to Priests in 1986. Finally, last year Benedict XVI inaugurated the current Year for Priests in honor of the 150th anniversary of John Vianney’s birth, and commended his example to all the priests of the Church.

Apparently there is something about the Curé of Ars. That “something” has been discovered by Fr. Frederick L. Miller (Chairman of the Department of Systematic Theology at Mount St. Mary’s Seminary in Emmitsburg, Maryland) in the course of guiding several pilgrimage-retreats to Ars for priests and seminarians. His new book The Grace of Ars synthesizes the experience and spiritual depth of those retreats. Reading it is, hopefully, a first step toward receiving the immense graces occasioned by a study of and devotion to the incomparably fruitful yet simple priesthood of John Vianney.

(chapter 1), inviting the reader to reflect on the nature of Christ’s call

(3), so that each priest becomes a man configured to Jesus Christ

(4). Fr. Miller than focuses on three particularly rich and emblematic aspects of St. John Vianney’s priesthood in these telling chapters:

Given the Curé’s hallmark ministry (he spent up to sixteen hours a day in the confessional), Fr. Miller profoundly explains the now often underrated Sacrament of Reconciliation as its own unique re-presentation of the Passion of Christ (8). And given Vianney’s immense devotion to Our Lady, he also devotes an important chapter to “the sacred alliance of the Blessed Virgin and the priest” (9). Fr. Miller’s text concludes with a consideration of Saint John Vianney as an “icon of the Divine Bridegroom of the Church” (10).

Well-organized and clearly written throughout, The Grace of Ars manages to capture a superb blend of deep theological reflection and palpable inspiration from the words of Christ, the mission of the Church, and the life and work of the saint himself. This would in itself be enough to communicate something of “the grace of Ars” to any priest seeking a true renewal of his vocation, but the book does not close with Fr. Miller’s reflections. It also includes the magisterial texts cited above from John XXIII, John Paul II and Benedict XVI, as well as some excellent photographs of the Curé’s parish church and modest residence, and even a novena prayer to St. John Vianney.

Anyone who reads and meditates on this book will become imbued with the three guiding insights of the Curé of Ars, as quoted from his own sermons:

As a layman, I can’t claim an authoritative opinion, but it seems to me that if you’re a priest in need of revitalizing your vocation, the first thing you’ll want to do is read The Grace of Ars, and the second is to arrange your own pilgrimage there. And if you know a priest or seminarian who is struggling, this book could well be a heaven-sent gift. It is not too much to say that Pope Benedict's entire program for the Year for Priests is contained in Fr. Miller's outstanding book. Its pages hold the key to a priesthood radically, fruitfully and joyfully configured to the High Priesthood of Jesus Christ. 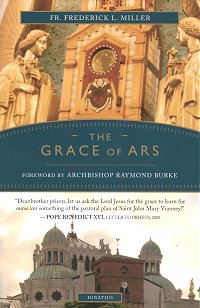 Year of the Priest Ping!