When she died last summer at the age of 87, it's doubtful my mother-in-law, Genevieve Ohlin, had even heard of her holy namesake, St. Genevieve of Paris. First of all, "Murph" (the nickname my mother-in-law always went by) was an LLL (Life Long Lutheran) and not much of a churchgoer at that. But now that she has left the Missouri Synod for a far more heavenly assembly, I have no doubt Murph (who always loved a good story) has had a chance to hear the saint's tale from the first "Gen" herself, and would love to share it with you. 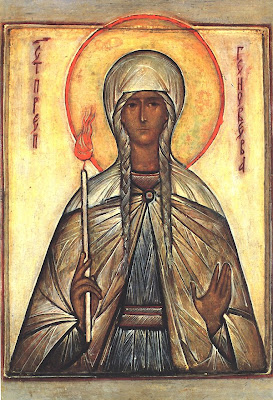 St. Genevieve was born in Britain to a fairly wealthy merchant family in 422. The truly cool part of the story begins when, in an attempt to stop the spread of the Pelagian Heresy, St. Germanus of Auxerre came to preach on the isle, and in the midst of his mission saw the 7-year-old Genevieve listening intently to his every word. Inspired by the Holy Spirit, Germanus stops his talk in its tracks, lays his hands on the girl's head, and the beautiful young Brit is instantly converted. Fortune later had Gen and her family moving to France, and at the age of fifteen, she presented herself to the Bishop of Paris to take the veil of the perpetual virgin, the fifth century's version of a nun.

Although her selfless charity made an immediate impact on the less fortunate of the region, Gen's holy hospitality initially inspired a great deal of hostility as well. Reasons for this hatred ranged from sheer jealousy to capitalist reality (as Butler's Live's suggests, "Merchants do not like rivals who give away for nothing goods that they might well sell,") to being "female and bossy" (not counting the virgin-martyrs, Genevieve was indeed one of the first public female saints, which no doubt led to a lot of fifth century male chauvinism), but whatever the cause, Genevieve's work among Paris' poor seemed a lost cause until her old friend Germanus intervened. Hearing of her difficulties, the saint sent his youthful protege the gift of "blessed bread," which the public instantly understood as not only the older leader's esteem for her efforts, but solidarity with her spirit, and the opposition to her among Christians ended.

Of course, there was still many a persecution to be suffered from the pagans, but the future patron saint of Paris handled these problems with Christian aplomb as well. When the invading Franks captured Paris after a long siege, reducing nearly the entire population to starvation, Genevieve used both her merchant and missionary skills to secure an able ship, sail swiftly up the Seine to Troyes, and return triumphantly with a boatload of corn in time to save the citizens. On another occasion, when spies reported that none other than Attila the Hun was about to storm the city, Genevieve encouraged the Parisians to stop panicking and begin praying and fasting. Sure enough, when the amazed Attila heard that the people were not fleeing in droves as his generals had predicted, but were gathering en masse (actually "in Mass" at the brand new St. Denis Cathedral, whose building was also due to Gen's intercession) to resist, the Hun shrugged and led his band of bloodthirsty marauders on a different excursion, and the city was spared.

As is true in the lives of many heavenly intercessors, Genevieve's legacy did not end with her entering into eternal life at the turn of the 6th century. In fact, one of Gen's greatest miracles did not occur until 1129, the year of the "burning fever." The ergotism epidemic, which we know was caused by eating fungus-infected rye bread, had spread throughout Britain and France, and was now threatening to destroy the great French city that even the great invaders from Gaul and Hun could not. Neither physicians nor priests could stop the advance of the "holy fire" (so nicknamed because of the initial burning sensation ergotism produced before it resulted in gangrene, convulsions and death) but when the authorities arranged a solemn procession of the saint's remains from her grave site to the still standing St. Denis Cathedral, the disease soon departed, and the epidemic abated. Afterwards, this procession of her casket was re-enacted whenever the city was in trouble, that is until the time of the French revolution, when, in the name of "science" and "progress," the Cathedral was ransacked and her relics were destroyed.

I guess you could honestly say that now there are two real reasons to recall today's saint. Certainly, the first is to honor the memory of my wife's mother, but the other, on the eve of the elevation of another who, also in the name of science and progress, vows to once again destroy the innocent, is even more pivotal. For it seems St. Genevieve was also adept at politics, first persuading Clovis, the King of the Franks from 481-511, to spare the lives of conquered French prisoners, but later counseling him to marry (from among many fair and politically connected maidens) Princess Clotida of Burgundy, herself a devout Christian and later a Catholic saint. Due to the duos' ceaseless prayers and humble influence, King Clovis himself was converted, and the Merovingian dynasty over which he reigned was saved, in more ways than one. Since St. Genevieve's intercession has already caused one world ruler to spare lives and convert to Christ, would it be too much to ask of her to do so again?

Yes, I realize many in my mother-in-law's former denomination, as well as those of other Protestant persuasions, also read my columns, and don't get why all this saint-praying stuff is necessary. Fortunately, Catholics also celebrate January 3rd as the Feast of the Holy Name of Jesus, and since St. Genevieve did EVERYTHING for the sake of the Name, in this respect you have to give her credit. I also think that, after reading her story, I can safely say that Gen was the type of believer a person would ask to pray for them if they were alive at that time. And, while all Christians profess Jesus conquered sin and death, and that nothing, even death, separates us from the love of Christ (Romans 8:38-39), Catholics also believe death doesn't separate us from the prayers of the heavenly believers either. Then isn't it possible, if this future president is as formidable of a foe of the Kingdom as many think, that we will need not only the prayers of all the Christians on earth, but the petitions of all the saints in heaven, to turn Barack back to the worship of His Holy Name?

Devotion to the Holy Name [of Jesus]

The Name of Jesus: Its Power in Our Lives

Devotion to the Holy Name of Jesus