When Zia Rahman celebrated the opening of the first mosque in Voorhees less than two years ago, he and fellow congregation members found they had built more than a house of worship. They had built bridges to other faiths.

While addressing the concerns of opponents to the mosque - who worried about parking, traffic, and even about possible terrorist ties - the Muslims made friends with Christians, Jews and others.

As managing director of the Muslim American Community Association, which operates the mosque, Rahman became the group's goodwill ambassador, visiting community groups, churches and synagogues to encourage a better understanding of Islam.

Tomorrow, his work will bear fruit in a rare agreement of cooperation and understanding between the association and the Roman Catholic Diocese of Camden - believed to be one of only two pacts in the nation between the faiths.

Rahman, Bishop Joseph A. Galante of the Diocese of Camden and others are scheduled to sign the document at 7 p.m. at the mosque, located at Lafayette Avenue and Haddonfield-Berlin Road.

The agreement calls for the establishment of a commission of Catholics and Muslims that will foster mutual respect for each other's beliefs, "champion each other's just causes" and promote understanding for each other's history and traditions.

It also creates a Catholic-Muslim Institute that will provide educational programs at the mosque and at churches.

"Things have unfolded in a much better way, by the grace of God, than I had envisioned," said Rahman, a native of Pakistan and retired director of corporate information technology at Rohm & Haas Co. "This is all His blessing.

"I don't think I could have imagined signing an agreement with a community of a half-million Catholics in such a short time," he said. "History is being made."

In a statement, Galante called the agreement "a significant step toward a deepening respect and understanding" between area Muslims and Catholics.

"As we move forward and call to mind the things that unite us, we do not gloss over our differences," the bishop added.

"Indeed, an honest acknowledgment of these differences, grounded in truth and goodwill, far from being an impediment, is necessary if there is to be authentic, fruitful dialogue, marked by reciprocity and mutual respect."

The Camden diocese followed Rochester's lead on Sept. 20, 2001, by signing an agreement with the Jewish community in South Jersey.

"One could get the impression that most of our dealings with one another and views of one another are filled with malice and suspicion," said Wallace of Catholic-Muslims relations.

"This is not true on our local dialogue. Muslims and Roman Catholics are involved in dialogue from the Pope on down to local Catholic dioceses throughout the world."

Pope Benedict XVI drew criticism from Muslims in 2006 after a speech in Germany in which he seemed to endorse a Christian view that early Muslims spread their religion by violence.

In his speech, the pope quoted 14th-century Byzantine emperor Manuel II Palaeologus who said, "Show me just what Mohammed brought that was new, and there you will find things only evil and inhuman, such as his command to spread by the sword the faith he preached."

The Pope later apologized if parts of his speech offended Muslims.

Wallace said the Pope saw reasons for dialogue with Muslims "despite the challenges caused by the presence of radical elements" in the Islamic world.

The faiths share values, he said, including "opposition to abortion and euthanasia, commitment to family life and recognition of the dangers of relativism, materialism and violent fundamentalism."

Islam and Catholicism "have a common heritage," Rahman added. "We affirm our belief in only one true God and His messengers. . . .

"How many people think about Muslims and Christians in that way and believe they have the same God? Very few."

Rahman and the members of the Muslim American Community Association ran into opposition about five years ago when they began to search for a mosque site. A first sign of trouble was an anonymous flyer, distributed in Voorhees in 2003, suggesting that the mosque might attract worshippers with ties to terrorists.

The 15-family congregation pushed on with the help of friends it had made. Rahman met at his Voorhees home with supporters of various faiths, who formed the Coalition for Multi-Faith Democracy.

During the "contentious" mosque hearings in Voorhees, "it would have been hard to foresee this day," said Lori Volpe, a member of the coalition.

Rahman "converted adversity into something positive," Volpe said. "Zia could have been bitter, but he responded with a loving heart."

Stuart Charme, a professor of religion at Rutgers University in Camden, said that it was not by accident that an agreement of Catholic-Muslim cooperation would be forged in this country.

"There is a kind of American value of tolerance," Charme said. "Even though we don't agree with each other, we can respect and get along with each other." 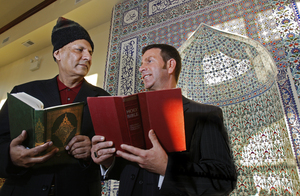 In the prayer room at the Voorhees Islamic Center,
Zia Rahman (left) holds the Koran while the
Rev. Joseph Wallace holds a Bible as they discuss
the agreement of cooperation and understanding
to be signed in a ceremony tomorrow between their
religious communities.

Just because we are both monolithic does not mean we believe in the same God. We believe in a loving forgiving God which gives everyone free will.

Fools. Islam recognizes no other faith. Nice words come from Muslims when they are weak. When they are strong, then comes the slaughter.

If one turns to the Qur’an, which Keith Ellison insisted on swearing into office upon, one finds many disconcerting verses within its chapters, called suras:

Believers, take neither the Jews nor the Christians for your friends. (Sura 5:51)

When you meet the infidel in the battlefield, strike off their heads. (Sura 47:4)

Mohammed is Allah’s apostle. Those who follow him are ruthless to the infidels. (Sura 48:29)

Kill the disbelievers wherever we find them. (Sura 2:191)

The only reward of those who make war upon Allah and His messenger... will be that they will be killed or crucified, or have their hands and feet on alternate sides cut off, or will be expelled out of the land. (Sura 5:33)

Fight those who believe not in Allah nor the Last Day, nor hold that forbidden which hath been forbidden by Allah and His Messenger, nor acknowledge the religion of Truth, (even if they are) of the People of the Book, until they pay the jizya with willing submission, and feel themselves subdued. (Sura 9:29)

Therefore, when ye meet the Unbelievers (in fight), smite at their necks; At length, when ye have thoroughly subdued them, bind a bond firmly (on them): thereafter (is the time for) either generosity or ransom. (Sura 47:4)

Believers, do not make friends with those who have incurred the wrath of Allah. (Sura 60:13)

Hint: If you need a “pact” to foster respect, it’s not really respect.

Ignorance is bliss (while it lasts).

10 posted on 02/19/2008 7:52:57 AM PST by kosta50 (Eastern Orthodoxy is pure Christianity)
[ Post Reply | Private Reply | To 1 | View Replies]
To: Alex Murphy
In other news, the first Catholic church ever built in Qatar was dedicated last weekend (I believe; maybe it's this coming weekend) over objections from many in the Muslim community.

There are estimated to be about 120,000 Catholics living in Qatar. The church holds about 2000.

A couple of wizards if ever there was.

14 posted on 02/19/2008 9:33:59 AM PST by Dr. Eckleburg ("I don't think they want my respect; I think they want my submission." - Flemming Rose)
[ Post Reply | Private Reply | To 7 | View Replies]
To: Alex Murphy
Pope Benedict XVI drew criticism from Muslims in 2006 after a speech in Germany in which he seemed to endorse a Christian view that early Muslims spread their religion by violence.

Gee, that's a Chrisitian view? Funny, I thought it was history. Silly me.

15 posted on 02/19/2008 10:15:32 AM PST by Antoninus (Looks like 2008 could be McCain vs. Hussein.)
[ Post Reply | Private Reply | To 1 | View Replies]
To: Alex Murphy; Claud; jrny
In the prayer room at the Voorhees Islamic Center, Zia Rahman (left) holds the Koran while the Rev. Joseph Wallace holds a Bible as they discuss the agreement of cooperation and understanding to be signed in a ceremony tomorrow between their religious communities.

That's the trouble with Islam. Even when a Muslim is treating you with dignity and respect, there's always that suspicion that it's only temporary--until he can gain some advantage over you.

One of the many aspects of Islam that poisons its relationships with all other people, not just Christians.

When Italy is taken over by the Muslims, and the Vatican is destroyed and rebuilt as a mosque, will this all be a moot point?