The apparitions of Our Lady of Guadalupe which occurred in Mexico in 1531 were an evangelization experience unsurpassed in all of Church history with the possible exception of the Day of Pentecost. December 12th marks the feast of Our Lady of Guadalupe, who I believe can be titled, Patroness of the Church Militant. I say this because, in that experience, She brought together all of the elements of a spiritual army that conquered what was then a total culture of death; if She could overcome the evil forces that directed the massacre of thousands of innocent human beings in 16th Century Mexico, we can be assured that She can repeat that victory for our modern day culture of death and dethrone the abortion demon from his altar of sacrifice.

Despite the glowing accounts of revisionist historians about the Aztec Indians (16th Century Mexico), the Aztecs practiced human sacrifice in a systematic and brutal manner. Their “religion” was based upon obeisance to bloodthirsty false gods who demanded a regular glut of killing to provide them with fresh hearts and blood of sacrificial victims. They had their own priests, rituals and a theology/cosmology tied to the idea that only blood sacrifice would appease their gods and so keep the world in order. It is estimated that as many as 50,000 victims a year were offered on the pyramidic temples of these gods dotting the landscape of Mexico.

After Hernando Cortes conquered the kingdom of Montezuma in 1521 he wiped out all the temples and put a legal end to the abomination of human sacrifice; yet, the murderous practice continued under the cover of darkness because the people were not converted from their killing instincts and practices which were deeply-rooted in culture and history. Enter Our Lady of Guadalupe with Her maternal love a decade later when the crisis of culture in the newly-conquered land had reached an apex.

The Virgin Mary appeared to St. Juan Diego, one of the early Christian converts from the pagan religion, and decreed by Her magnificent authority that the killing would stop in the hearts of the people as well as in their law. The story of the apparitions is well-known (see sidebar) but the effects of the apparitions are not, and these effects are equally important to understand in order to grasp what I call “The Guadalupe Event.” That is, the conversion of the people of that time from their idols and the dissipation of the Aztec culture of death. It was done precisely by marshaling an army of faith, and in this, She gave us a formula for the Church Militant that only needs to be repeated to conquer our own culture of abortion.

The first and critical element of the “Event” was the wholehearted cooperation of a holy and discerning bishop, Juan Zumárraga. To him Our Lady sent St. Juan Diego for the building of a church. It was not the project of the layman to build the church. St. Juan Diego proved his sanctity by being a faithful messenger of Our Lady’s plan, but She did not ask him or want him to build a church lest the pagan people think that She was setting up another religion other than the one Her Son founded. The bishop was the recipient of the miraculous image of the Virgin Mary impressed on the Indian’s cloak (tilma) and afterwards gladly built the church that Our Lady requested for the people. Following that, he sent out his cohort of missionary priests to baptize and sacramentally cleanse the people of their idols of polygamy, human sacrifice and demonic religion. The combination of the churchmen working hand-in-hand with the lay faithful in a full-scale assault on the idol-worship of the time is how the culture was purified. There are various estimates of just how many Indians came into the Catholic Church in the decade following the apparitions (1530s), but all accounts admit that there were 8-10 million conversions. That amounted to three-fifths of the entire Aztec population at the time!

Our Lady did not use a political process or a Supreme Court to accomplish this mass conversion. She engaged the Church in a battle of spirit with the demonic culture and thus purified the lives of the people from all their idols. Do not all the prophets foretell that God will purify His people from their idols if only they will turn to Him? Well, Our Lady shows us that the cleansing of body, soul, spirit—and culture—is indeed possible; if only the Church will become once again a Church Militant marching under the standard of Our Lady’s leadership.

On December 12th, the Feast of Our Lady of Guadalupe, please join me in praying for the Church Militant to rise up again and defeat the culture of death! 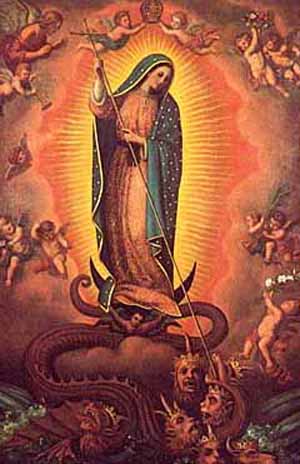 
O Holy Mary, Virgin Mother of God, who as Our Lady of Guadalupe didst aid in the conversion of Mexico from paganism in a most miraculous way, we now beseech thee to bring about in these our times, the early conversion of our modern world from its present neo-paganism to the One, Holy, Catholic, and Apostolic Church of thy divine Son, Jesus Christ, starting in the Americas, and extending throughout the entire world, so that soon there may be truly "one fold and one shepherd," with all governments recognizing the reign of thy Son, Jesus Christ the King. This we ask of the Eternal Father, through Jesus Christ His Son Our Lord and by thy powerful intercession - all for the salvation of souls, the triumph of the Church, and peace in the world. Amen.

My only quibble is that I'd ditch the bare-bottom baby cherubs and instead paint an army of large stern cherubim along the lines mentioned in 1 Kings 6:23
Solomon had two statues of winged cherubim made from olive wood, ovrlaid with pure gold, to put in the most holy place. Each creature was fifteen feet tall and fifteen feet from wingtip to wingtip.

Wow! Wonderful image and prayer. By the Power of her Son, she shall crush the serpent’s head!

I am on the Guadalupe committee for my parish. We have a member who was born in Mexico who started organizing a special mass 12 years ago, with the purpose to introduce her to our parishioners (Anglo, central Indiana).

It has turned into a huge mass, with many blessings to all who work on it. We will have 12 priests co-celebrating this year. It is really a wonderful mass.

What a wonderful accomplishment for both the Anglo and the Hispanic cultures.

**For the Conversion of the Americas and of the World**