From Great Historical Victories of the Rosary


Our Lady of the Rosary of La Naval


This victory was important because it saved Catholicism in all of Asia.


While elsewhere in the rest of the Asian continent the false religions violently opposed, in general, the implantation of Catholicism, and caused to flow in abundance the blood of the martyrs, the conversion of the Philippines was an event without parallel in history: in 40 years (from 15659 to 1605), without a single drop of blood being shed, the country became a model Christendom thanks to the Spanish. For the Church it became a providential base from which legions of missionaries set out to evangelize the other lands of Asia.


On March 15, 1646, a flotilla of Dutch Protestant ships, a formidable army, arrived at the large port of Manila. The Spanish and the Filipinos were unnerved, having nothing at their disposition but two merchant ships - The Incarnation and The Rosary - which they hastily armed as best they could. It was then that the venerable Fr. Jean de Conca, O.P., began to preach the Rosary to the sailors, and had them recite it in alternating choruses on the bridges of the two ships. The sailors vowed that if they should win, they would go on pilgrimage bare foot to the Virgin of the Rosary statue at the Dominican convent in Manila. From March to October, five violent encounters issued in five humanly impossible victories. The Protestant ships were demolished, while in the heavens a voice was heard saying, "Long live the Faith of Christ and the Blessed Virgin of the Rosary." Out of 200 men, the Catholics lost just 15. The Philippines remained within the Church.


An extraordinary propagation of the Rosary then occurred throughout the country, which became "The Kingdom of the Holy Rosary," according to the expression of Pope Pius XII. Every year, and even today, an immense procession wends through Manila, in thanksgiving, behind the miraculous statue of the Virgin of the Rosary, preceded by 21 decorated floats bearing Dominican saints. Two hundred thousand people carrying candles follow the Madonna, and the Philippines are consecrated to our Lady at the end of the ceremony.

From Our Lady of the Rosary of the Philippines: La Naval of Manila


Of all the famous Marian images in the Philippines, La Naval stands alone as a "native virgin". Although her clothes mark her readily as a product of the 17th century Spanish "Golden Age", her oriental features reflect the uniqueness of her position as a truly indigenous queen of the Philippines.


In 1593, on the death of his father, the Spanish Governor General Luis Perez Dasmarinas commissioned Captain Hernando de los Rios Coronel to have a Marian statue sculpted. He wished to give a religious imprint to his regime in the Philippines. A non-Catholic Chinese sculptor was found to make the statue. This sculptor later became a convert through the intercession of the virgin.


The beautiful image was presented to the Manilla Dominicans and enshrined in the old Sto. Domingo Church by the Pasig. The image is about 4'8" tall and is made of hard-wood, with ivory face and hands. Over three centuries have mellowed the ivory to a delicate brown. The Oriental- Filipina face is almond-shaped, with high-set cheekbones and slanting eyes. The image is dressed as a royal lady of the palace of King Philip of Spain. On her left arm, she holds her beloved Holy Child Jesus. With her right arm, she holds a royal scepter and staff and her Rosary. The statue is covered with jewels, tributes from her throngs of devotees through the ages. Each jewel has its own story. The halo issurrounded by 24 stars, and she wears a queenly crown....


In the Philippines of 1646, there were not only hostile Muslims in the South, but also Dutch and English privateers who wanted the riches of the archipelago and who wanted to replace Catholicism with Dutch Protestant Calvinism. During this year, there were five bloody naval battles between the greatly outnumbered Spanish - Catholic - Phillipine forces and the Dutch marauders. Only fifteen of the defenders of Manilla were lost in all of the battles. The Dutch, then political enemies of the Spanish, retreated, and never again threatened to destroy the integrity of the islands by annexing them to the Dutch East Indies.


Before each of the battles, the intercession of Our Lady was fervently sought. Crew members -- Spanish soldiers, religious, and Filipinos -- vowed special homage to Our Lady for a victorious battle. True to their Latin heritage and Catholic pride, the victorious defenders petitioned official church recognition and declaration of the naval victories of 1646 as miracles worked by the Mother of God. The Ecclesiastical Council in Cavite, with the help of doctors of theology, canonical experts, and prominent religious, deliberated and examined written and oral testimonies from all eye-witnesses. Finally, on April 9, 1662, the Council ordered that the five naval victories of 1646 be declared as miraculous, "granted by the Sovereign Lord through the intercession of the Most Holy Virgin and devotion to her Rosary, that the miracles be celebrated, preached and held in festivities and to be recounted among the miracles wrought by the Lady of the Rosary for the greater devotion of the faithful to Our Most Blessed Virgin Mary and Her Holy Rosary." This decree was signed by all eight members of the Church Council. 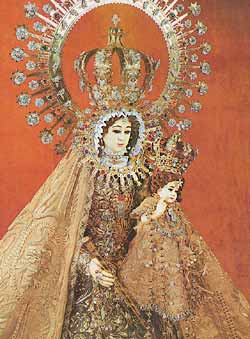 
You learn something new every day! I'm half Filipino, and I hadn't heard of this until this past weekend, after linking to an article off a blog.

I had not heard of it either. Thanks for the post.

6 posted on 02/21/2006 7:01:26 AM PST by Pyro7480 (Sancte Joseph, terror daemonum, ora pro nobis!)
[ Post Reply | Private Reply | To 4 | View Replies]
To: Pyro7480
Great story - thanks for posting it. I think the former Dutch East Indies are almost all muslim now. Thank God the Philippines persevered in the faith. I can't imagine what it would be like if they also were muslim.

They did, but the fight is still on. The communist/islamic Moros are still a serious issue on some of the islands, and the US is helping the Philippine government in fighting them. Unfortunately, puerile minds on this forum prevent rational discussion of this almost forgotten front in the ongoing war against islamic terrorism.

Exactly right. Do you remember why the Colt .45 was invented?

From this article (which might be of interest to you also, Pyro)

Q. It has been argued extensively elsewhere that development policies as they are currently constituted in much of the Third World cannot but amplify people’s increasingly besieged sense of identity, thus creating the conditions for identity-based conflict (ethnic, sectarian, religious, etc.). Do you think that the kind of development policies implemented by the post-colonial state in the Philippines may have exacerbated relations between Muslims and Christians in Mindanao?

A. They could have, but the Muslim rebellion against central authority predates the independent Philippine government. It existed against the Americans, against General Pershing, who had the Colt .45 automatic pistol invented precisely to stop a Moro Juramentado running after his own personal or clan enemies; the .45 was invented to stop the guy in his tracks.

Before that the Spaniards were never able to pacify the Muslims…

Moros hopped up on drugs don't respond well to treatment with a .38 Colt revolver.