Warnings of an 'inquisition' have come from the Lesbian and Gay Christian Movement in response to the Archbishop of Canterbury's latest comments on civil partnerships. Dr Rowan Williams, in a Q&A posted on the Global South's new website, spoke movingly of his first encounter with the 'living God' at a Russian Orthodox Mass in Swansea. But in the same session he addressed the question of 'discipline' on the issue of civil partnerships, which will become legal in the UK from next month.

He said, 'If it can be established that a priest seeking to register a civil partnership is in fact active in a sexual union, then that priest is liable to the discipline of the Church.'

He continued, 'What form the discipline takes, since we are in the middle of revising our disciplinary provision, I can't at this moment say with precision, but I'll simply mention that it is recognised as a disciplinary offence if priests either refuse to declare that his civil partnership is not a sexual union, or if they volunteer to the bishop that it is a sexual union.'

What a nightmare lies ahead for the Church and its unfortunate clergy. It conjures up images of people shinning up drainpipes at vicarages to try and photograph clergy 'in the act'. In Britain, the need for evidence of sexual activity in the bedroom went out with the secular divorce reforms but it seems as if the Church of England, in all its compassionate consideration, is about to bring it back.

The Rev Richard Kirker, of the Lesbian and Gay Christian Movement, believes that up to 400 gay clergy couples will register their partnerships within the first five years of the Act coming into effect. But unlike with marriages, there will be no requirement for public notice to be given or for banns, and no need for witnesses at the ceremony. Mr Kirker believes therefore that many clergy who do register their partnerships will do so secretly to avoid what he describes as an 'inquisition'.

But register them they will, he says, because it makes such good sense from the point of view of security, pensions and inheritance. It is difficult therefore to see how they will be able to keep the arrangements secret, given that the Church Commissioners will have to know if there is going to be a future claim on a clergy pension from a civil partner.

Both liberals and evangelicals are unhappy with the bishops' civil partnerships statement. Evangelicals are upset because they are told they must not quiz lay members of their congregations about the sexual nature of their civil partnerships. This is one of the reasons that the Rev Richard Coekin, the Southwark priest who's had his licence revoked, fell out with his bishop Tom Butler and declared his congregation in impaired communion with the bishop. (Links to then latest developments on this story can be found here.)

Liberals, on the other hand, are upset because they are being told they must quiz the clergy about their civil partnerships.  (While this apparent double standard might seem strange to the unitiated reader, it is in fact a natural consequence of the principles outlined in the 1991 document, Issues in Human Sexuality.)

However, only one bishop, the liberal Peter Selby of Worcester, has had the courage to dissent publicly.

Dr Selby says, 'I remember meeting two priests, one of whom was having to nurse the other in the final stages of an AIDS-related illness. Had it been possible for them at that time, I imagine they might have considered entering a civil partnership. Whether they did so or not, they (like many I have known since, in less distressing circumstances) certainly threatened nobody, and offered an enriching inspiration of what it means to be in relationship - for better, for worse.

'I dare to hope that bishops will find better ways of relating to such couples than seeking assurances, and I believe many of us will. But, sorry as I am to need to say so, the words we have uttered on this topic will not help either bishops or those to whom they minister. For the desire of people to enter civil partnerships, and the willingness of the Government to make that possible, represent something far more hopeful than this document makes it appear.

'Sustaining the Church's doctrine of marriage is a challenging task at this time, almost entirely for reasons that have, if we are honest, little to do with homosexuality. If our difficulty as Church with particular life-choices means that we cannot speak hopefully about what are clearly signs of commitment and responsibility, perhaps it would have been better to say nothing.'

This is, after all, what the Roman Catholic church has opted to do. I had assumed, the CofE being the established church, that it was incumbent on it to do something, but if a bishop is suggesting nothing need have been done, maybe that would indeed have been the better course of action. 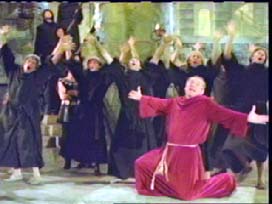 How in the world can anyone blame a religion -- any religion -- for having moral standards and enforcing those standards?

If you don't like the doctine of the church -- GO TO ONE THAT MATCHES YOUR PERSONAL STANDARDS!

Instead those with no morals want to push their agenda to remove the morality from long-established religions.

I think we need (or are in) a new Crusade -- against the Godless who want to drag all Christianity down.

I get this image of a pile of "faggots" at the base of a stake. Forgive me! :)

Too bad it was Ripley and Latimer, instead of some other folks we could mention . . . < g >

6 posted on 11/15/2005 7:01:21 PM PST by AnAmericanMother (. . . Ministrix of ye Chace (recess appointment), TTGC Ladies' Auxiliary . . .)
[ Post Reply | Private Reply | To 5 | View Replies]
To: Kolokotronis; sionnsar
Warnings of an 'inquisition' have come from the Lesbian and Gay Christian Movement in response to the Archbishop of Canterbury's latest comments on civil partnerships.

Which only goes to prove that an inquisition isn't always a bad thing...