The author poet Carl Sandburg once said, "A baby is God's opinion that the world should go on." Written within the human heart is the knowledge that life is good and worthy to pass on from one generation to the next.  Newlyweds who pledge their love "till death do us part" look forward to the day they can hold in their arms a child to share their love.  Yet, each year, millions of couples who long for children discover that, for one reason or another, they are unable to conceive.

Today, science and technology have joined hands in offering infertile couples many different options to fulfill their desire to raise a family.  On July 25, 1978, it was news to the world that Louise Joy Brown was born.  She was the world's first successful "test-tube" baby.  In Great Britain, ever since 1966, Dr. Patrick Steptoe and Dr. Robert Edwards had been experimenting on ways to help infertile couples have a baby.  For ten years, not one of the pregnancies they began with their new methods lasted more than a few weeks.  But then came baby Louise.  The world has never been the same.  It has become routine to resort to in vitro fertilization.

The modern technology of reproduction has moved beyond the 'baby step' it took in 1978.  Surrogate parenting.  Donor eggs.  Donor sperm.  Embryonic research.  Science has accelerated its ability to manipulate nature.  The world no longer thinks in terms of a man and a woman and a child.  Society talks of parents or couples and their right to a child, even if they are not married, even if they are not man and wife.  The technology of reproduction has altered the way a child is conceived and born into the world.  It has redefined such basic ideas as "parent" and "family."

In July 1968, Pope Paul VI wrote the landmark encyclical Humanae Vitae.  He addressed with clarity and insight a question that had come to the forefront of public discussion since the 1930's.  He provided a response to the question of artificial contraception.  In responding to the question, he placed before the Church and the world a principle that went beyond the immediate issue.

He taught that "By means of the reciprocal personal gift which is proper and exclusive to them, husband and wife tend toward that communion of their beings whereby they help each other toward personal perfection in order to collaborate with God in the begetting and rearing of new lives" (Humanae Vitae, 8).  In a word, he said that the unitive and procreative aspects of conjugal love should be joined together.  When they are separated by artificial contraception, the exchange of love between a husband and wife no longer expresses in its fullness true mutual love and its ordering to the vocation of parenthood (Humanae Vitae, 12).

In 1981, Pope John Paul II developed the same teaching.  He taught that love is essentially a gift.  Conjugal love joins the spouses and makes them one flesh (Gen 2:24).  But conjugal love does not end with the spouses.  It makes them capable of sharing with God in giving new life to another human person.  Through contraception, the language of love between a husband and wife is no longer spoken in its integrity.  Instead, they speak "an objectively contradictory language, namely, that of not giving oneself totally to the other" (Familiaris Consortio, 14).

In the teaching of both Popes, beneath the question of artificial contraception is the deeper issue: the moral implications that guide man's and woman's choice to co-operate with God in bringing new life into the world.  With the unprecedented advances science has made since 1968, a man and a woman seeking to raise a family today face complicated choices.

At the time of Humanae Vitae, the question was whether it was morally permissible to exchange marital love apart from its openness to procreation.  Today the question has moved to whether it is morally acceptable to procreate new life apart from marital love itself. Laboratories, test tubes, sterile instruments are now replacing the tender embrace of conjugal love.  In either case, the teaching of Humanae Vitae remains-the unitive and procreative dimensions of the conjugal love should not be divorced.

According to the Church's consistent teaching, God has gifted man and woman with sexuality so that they can share love, be united intimately one with another and co-operate with God in the wonder of procreation.  Conjugal love is ordered to the good of the spouses and to the gift of new life--the life of another person whose value and dignity come from the Creator.  The expression of conjugal love between a husband and wife, according to the laws written in man and woman, unites the two and makes them apt for begetting a child.  It is in the total gift of self expressed in the marital act that is most ready to welcome the mystery of new life.

Just as the expression of conjugal love follows God's design when it is open to new life, so too the conception of new life likewise follows God's plan when it happens in the intimate embrace of a husband and wife.  Human procreation is neither a mere biological nor technological act.  It is distinct and far superior to the beginning of any other form of life, precisely because it involves the personal dignity of a man and a woman and their child.

Today some infertile couples avail themselves of the sperm or egg of a third party to have a child.  This contradicts marital fidelity.  The unity of marriage calls spouses to honor the right of each other to become a father and a mother only through each other. This also violates the right of the child.  "The child has the right to be conceived, carried in the womb, brought into the world and brought up within marriage: it is through the secure and recognized relationship to his own parents that the child can discover his own identity and achieve his own proper human development" (Congregation for the Doctrine of the Faith, Instruction of Respect for human Life in its Origins and on the Dignity of Procreation, II, A, 1, 1987).

Sometimes couples unable to conceive in the womb of the wife use modern technology and begin human life in vitro, in test tubes. Their strong desire to be parents and to cooperate with God in inviting another to the banquet of life is noble.  But resorting to in vitro fertilization lacks an ethic consistent with the dignity of the human person.  When using the technique of in vitro fertilization, more than a single embryo is formed.  And the ones not used are either discarded or used for experimentation.

New life begins the moment the ovum is fertilized. This new life is distinct from the life of either parent.  It is neither the life of the father nor the life of the mother. "It is rather the life of a new human being with his own growth.  It would never be made human if it were not human already.  To this perpetual evidence ... modern genetic science brings valuable confirmation.  It has demonstrated that, from the first instant, the program is fixed as to what this living being will be: a man, this individual-man with his characteristic aspects already well determined.  Right from fertilization is begun the adventure of a human life." (Congregation for the Doctrine of the Faith, Declaration on Procured Abortion, 12-13,1974).  For this reason, it is morally reprehensible to discard, experiment on and destroy human embryos.  From the moment of conception, human life is to be respected and protected.  The value of life is fundamental.  On it depend all other values of the human person.

Surveys in the 60's indicated that close to 65% of Catholics followed Church teaching on the important issue of marital love and procreation.  But Humanae Vitae became a defining moment in the life of the Church.  Before its publication, theologians mulled over statements of the magisterium, provided their commentaries and interpretations.  Quietly they would register their dissent.  But not after Humanae Vitae.  The encyclical unleashed a reaction of dissent unseen before in modern times. Theologians made a loud and public display of their views.  They distanced themselves and many faithful from the teaching of the Church.  In no small way, from this moment forward, dissent became the language of the day.

But dissent does not change the truth of the Church's teaching.  The moral teaching of the Church belongs to her deepest meditation on her faith and its meaning for our life.  Because of her pastoral responsibility to preach the Gospel, the Church is "vigilant over the right conduct of Christians" (Irenaeus, Adversus Haereses, IV, 26, 2-5). The Church's moral teaching is an essential part of our Catholic heritage of faith.  As Pope John Paul II reminded us, "Although the Church often appears as a sign of contradiction, in defending the whole moral law firmly and humbly she is upholding truths which are indispensable for the good of humanity and for the safeguarding of civilization itself" (Address to the Bishops of California, Nevada and Hawaii, October 2, 1988).  As responsible individuals, we need to make our free choices moral in order to share fully in the goodness of God's plan for creation.

TOPICS: Catholic
KEYWORDS: bishopserratelli; conjugallove; godsdesign; humanaevitae; ivf; procreation
1 posted on 07/30/2005 10:23:28 PM PDT by Coleus
[ Post Reply | Private Reply | View Replies]
To: Coleus
The value of life is fundamental. On it depend all other values of the human person.

May this become the recognized 1st law of modern science.

2 posted on 07/30/2005 10:35:50 PM PDT by TotusTuus
[ Post Reply | Private Reply | To 1 | View Replies]
To: TotusTuus
well, in America, we have been deprived of our right to life, our right to property and our right to liberty all accomplished via judicial tyranny.

Other than that, things ain't too bad

You're just trying to make me feel good on a Sunday! 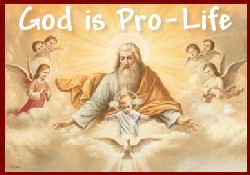