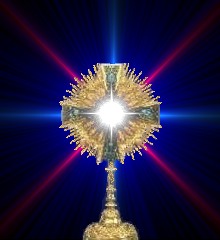 "Could you not watch one hour with Me?"

It all began at the Last Supper on Holy Thursday...

(Adapted from the "History Notes" a Fr. S. Casarotto - a Scalabrinian Missionary and Pastor of St. Anthony's Church, Buffalo, NY.)
and from "HISTOREA.TXT" downloaded from EWTN
TOPICS: Activism; Apologetics; Catholic; Current Events; Ecumenism; General Discusssion; History; Ministry/Outreach; Prayer; Theology; Worship
KEYWORDS: adoration; benediction; eucharist; eucharisticadoration; exposition; realpresence
Imagine for a moment that we are living in Jesus’ time and He has invited us to visit with Him and share a meal with Him. Knowing who He was, we would be humbled and honoured by this invitation. We would put all our effort - our whole self - into being there with Him.

The good news is that Jesus IS here with us today - body, blood, soul and divinity – in the Eucharist. Although Jesus comes to us under the appearance of bread and wine, His presence is as real to us NOW as He was real to His disciples when he walked this earth. He can perform miracles, heal us, teach us, love us; we can talk to Him and He can speak to us through His Word (Holy Scripture) and through the Holy Spirit who lives in us through our baptism.

Jesus, who is Love, invites us to come to Him, to share our lives with Him, to love Him, to simply be present with Him in this Most Blessed Sacrament.

1 posted on 01/01/2004 1:25:50 PM PST by NYer
[ Post Reply | Private Reply | View Replies]
To: NYer
Adoration bump!
2 posted on 01/01/2004 1:40:14 PM PST by Salvation (†With God all things are possible.†)
[ Post Reply | Private Reply | To 1 | View Replies]
To: american colleen; sinkspur; Lady In Blue; Salvation; Polycarp; narses; SMEDLEYBUTLER; redhead; ...
In respect for the Holy Father's New Year's request to pray for world peace, our parish held Eucharistic Adoration this afternoon. I could not think of a better way to welcome the New Year than to spend some time in the presence of our Lord.

The exposition ran from 1 to 3pm with Benediction at 2:45pm. I arrived at 2:15pm and found the parking lot quite full. This was definitely a good sign, since this is only the 2nd time we have had Eucharistic Adoration at our parish in the past 2 years.

Upon entering the church, I immediately sensed the aroma of incense. There in the middle of the altar, was a beautiful monstrance with our Lord. The last time, Father had piped in some background music ... not this time. The pews were well populated and the silence was a veritable blessing. To kneel in the presence of the Lord was to have a 100lb. weight lifted off my chest. At 2:45, Father entered with thurible containing incense. We sang Tantum Ergo.

followed by prayers and the Litany of Christ. What a beautiful service!

3 posted on 01/01/2004 1:44:24 PM PST by NYer
[ Post Reply | Private Reply | To 1 | View Replies]
To: NYer
We had an hour yesterday before the 5pm Mass. That parish has Eucharistic Adoration every Saturday, so in the beginning it wasn't all that populated, but as the hour went on, more people came. We sang O Salutaris Hostia, although in English (the Latin/English argument is obvious depending on who's leading the singing), and Tantum Ergo. We said the divine praises. It was so quiet except for two older ladies who just couldn't seem to help themselves, but to talk.

Actually that is the time I am signed up.

Our new priest is pushing this! He had it in the announcements for the last two weeks. Hopefully we will also have a full Benediction soon!

One of the churches in our vicariate does have 24/7 Adoration. It's downtown and I am not signed up for it at this time.
5 posted on 01/01/2004 2:13:23 PM PST by Salvation (†With God all things are possible.†)
[ Post Reply | Private Reply | To 3 | View Replies]
To: Desdemona; drstevej; Salvation
It was very nice, though, to just be able to sit and let the peace of the place settle the soul.

PEACE! yes, that's the word. There is not explaining this to someone who has never known the experience of sitting in the presence of the Lord. Uplifting, humbling, enobling, moving ...indescribable. I can still smell the aroma of the incense that wafted upwards towards God.

May the heart of Jesus, in the Most Blessed Sacrament, be praised, adored, and loved with grateful affection, at every moment, in all the tabernacles of the world, even to the end of time. Amen.

O Saving Victim opening wide
The gate of heaven to all below.
Our foes press on from every side;
Thine aid supply, Thy strength bestow.


To Thy great name be endless praise
Immortal Godhead, One in Three;
Oh, grant us endless length of days,
In our true native land with Thee.
Amen.

O Salutaris Hostia is from the last two verses of Verbum Supernum, one of the five Eucharistic Hymns written by St. Thomas Aquinas, (1225-1274), at the request of Pope Urban IV (1261-1264) when the Pope first instituted the Feast of Corpus Christi in 1264. The prayer was used most commonly at Benediction of the Blessed Sacrament.

6 posted on 01/01/2004 2:37:34 PM PST by NYer
[ Post Reply | Private Reply | To 4 | View Replies]
To: NYer
We have Adoration daily from 11:00-12:00. During Advent we had Benediction following Vespers every Sunday evening. We sang the wonderful Latin hymns Tantum Ergo and Salutaris Hostia. I feel so blessed! And on a hopeful note, I went to the website of my previous parish. When I was there it was an Amchurch of the worst kind. Adoration just wasn't done or even spoken of. According to the website they are now having weekly Adoration.
7 posted on 01/01/2004 4:14:00 PM PST by k omalley
[ Post Reply | Private Reply | To 1 | View Replies]
To: NYer
A Blessed 2004 to you. Thank you for posting this Eucharistic history. We went to a 5PM Mass, followed by personal New Year prayer and blessing by our priest for individuals and families, followed by pot-luck dinner, followed by Eucharistic adoration and Benediction (led by a young deacon to be ordained a priest in June), followed by dessert and coffee. A great way to begin the new year!
8 posted on 01/01/2004 4:49:08 PM PST by Dusty Rose
[ Post Reply | Private Reply | To 1 | View Replies]
To: NYer
I Can Only Imagine
MercyMe


I can only imagine

What my eyes will see

Surrounded by Your glory, what will my heart feel

Will I sing hallelujah, will I be able to speak at all

When that day comes.
And I find myself

Standing in the Son


I can only imagine

When all I will do