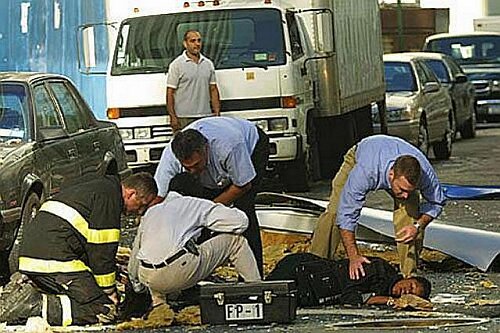 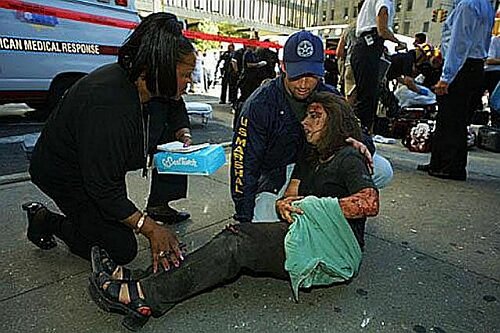 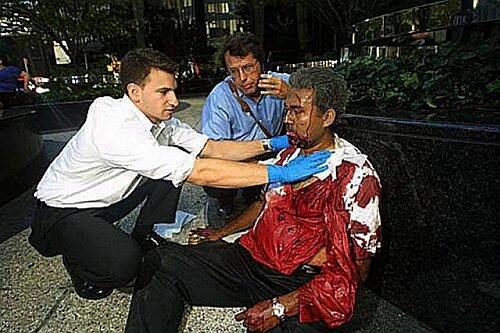 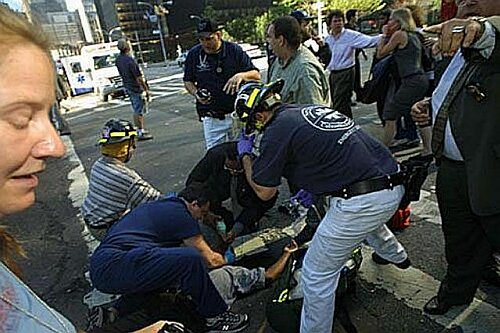 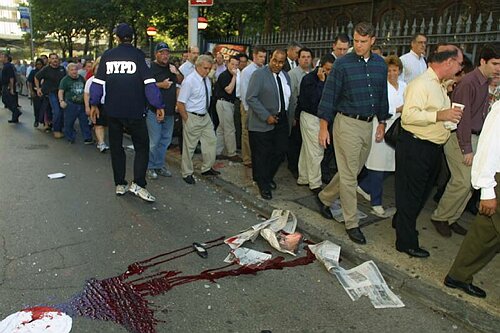 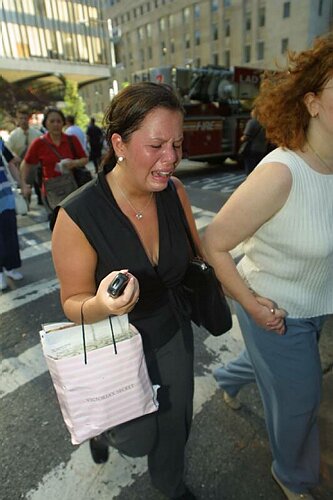 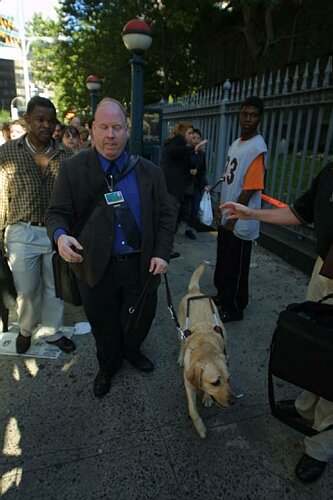 TOPICS: Extended News; Foreign Affairs; Front Page News; News/Current Events; War on Terror
KEYWORDS: 2ndanniversary; 911; 91101; 911photos; 911pics; alqueda; attacks; photos; terrorism; truth; wtcattacks Navigation: use the links below to view more comments.
first 1-20, 21-40, 41-60, 61-80 ... 261-269 next last
Although the above is very graphic, in my opinion, we need to stop thinking of 9/11/01 (and the anthrax attacks) in antiseptic terms. What happened was beyond horrible. Innocent people — even some children — were forced to sit on airplanes that were used as missles to attack buildings. One Washington, DC, area 11-year-old boy was on the plane that crashed into the Pentagon. He was sitting on that plane in sheer terror — knowing his daddy worked at the Pentagon. Think of that. Think! In your mind's eye, put yourself — or your children — in that boy's place. That's what 9/11/01 was about. That's what we must never forget and never let happen again.


The lives of many thousands of people were shattered. The bodies of most of those who died were shredded in that maelstrom of concrete, steel, fire, and other debris. Hundreds of bodies fell from the upper floors and smashed into the street or onto roofs — and, in some cases, onto people on the ground.


The true story of these attacks is not found in the movie-like images on TV, which carefully avert our eyes from the real horror. It is found in the gallons of blood that ran on the streets of lower Manhattan, at the Pentagon, and in Shanksville, PA.


This was not a disaster. Not a catastrophe. Not an act of God. It was a willful, deliberate act of mass murder. The blame for what happened that day, and in the days and months following, lies squarely at the feet of the radical Islamist thugs who declared war on us. It also lies at the feet of the most criminally negligent president in United States history, William Clinton. Nowhere else.


Be a witness to the truth. NEVER FORGET. Leave forgiveness to the Lord, and don't let another Democrat back in the White House for many years to come.

Mike Hingson (blind from birth) and his guide dog, Roselle, who led him down from the 87th floor.

We need to remember that it wasn't just concrete and steel that was destroyed on 9-11.
8 posted on 09/11/2003 4:09:56 PM PDT by SAMWolf (US Marines - Technical Support for 72VirginsDating.mil (Thanks jriemer))
[ Post Reply | Private Reply | To 1 | View Replies]
To: Wolfstar
Thank you. I turned the TV off this morning when it became clear that the 9/11 memorial ceremonies were nothing but a staged backdrop to accompany the usual network talking head monolog against the President and our country. I avoided it the rest of the day. What you've posted is far more painful, but also far more appropriate.

To: Wolfstar
Not an act of God. It was a willful, deliberate act of mass murder.

Well said. And the sonner we replace mournful lamentations with righteous anger, the sooner we will muster enough national outrage to do what must be done to solve this problem. Nothing short of another attack will do the trick, otherwise.


"Our war on terror begins with al Qaeda, but it does not end there. It will not end until every terrorist group of global reach has been found, stopped and defeated."

Fellow citizens, we'll meet violence with patient justice -- assured of the rightness of our cause, and confident of the victories to come.

I will not forget this wound to our country or those who inflicted it. I will not yield; I will not rest; I will not relent in waging this struggle for freedom and security for the American people...


As we remember September 11, 2001, we reaffirm the vows made in the earliest hours of our grief and anger. As liberty's home and defender, America will not tire, will not falter, and will not fail in fighting for the safety and security of the American people and a world free from terrorism. We will continue to bring our enemies to justice or bring justice to them. This Patriot Day, we hold steady to this task.

19 posted on 09/11/2003 4:20:34 PM PDT by SunStar (Democrats piss me off!)
[ Post Reply | Private Reply | To 1 | View Replies]
To: Wolfstar
All humanity is of one Author, and is one volume; when one dies, one chapter is not torn out of the book, but translated into a better language; and every chapter must be so translated; God employs several translators; some pieces are translated by age, some by sickness, some by war, some by justice; but God’s hand is in every translation, and his hand shall bind up all our scattered leaves again for that library where every book shall lie open to one another.